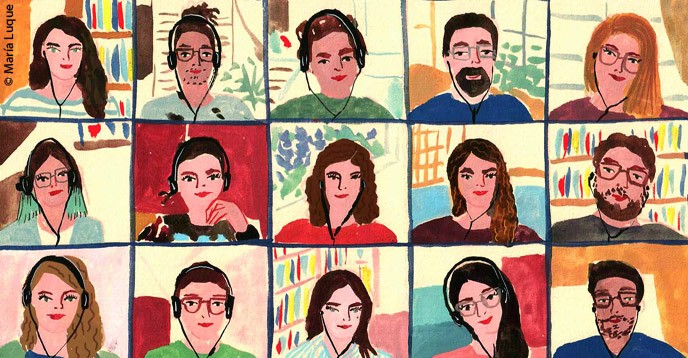 “Let's do that radio thing”, a series of illustrations by Argentinian artist María Luque to mark the creation of Radio Ambulante on its 7th birthday in 2019.

A Colombian guru who abused dozens of women while pretending to heal them; a Cuban writer remembering her childhood in Havana; an amateur astronomer who managed to photograph the birth of a supernova from the terrace of his house in Rosario, Argentina. These are some of the diverse stories told on Radio Ambulante, a podcast service in Spanish that for eight years has not spared the imagination or effort to reach more and more people. Carolina Guerrero, one of its founders, explains the mission of this new kind of broadcasting.

How did you come up with the idea of Radio Ambulante?

Eight years ago, Daniel Alarcón and I were living in San Francisco. He is a writer, and I am a journalist; he is Peruvian, and I am Colombian. We emigrated for different reasons, but we shared the same attachment to Latin America, to the culture we grew up in – the culture of our parents and the Spanish language. We often found ourselves commenting on the type of format that dominates public radio in English, here in the United States – which is long-lasting, and narrated by the characters themselves. We really liked this format and regretted that nothing similar existed in our language. The Spanish content available to us in the US was not of great quality, so we ended up consuming content and media in English. Given that Latin America has a wealth of stories and narrators, we thought that there was a need for telling stories in that format… and decided to create it ourselves.

Were you thinking then of a Latino audience, that is, Spanish-speaking migrants living in the US?

When I migrated to the US over twenty years ago, I somehow stopped being Colombian and became more Latin American. I no longer had many Colombian friends, they came from everywhere – Chile, Argentina, Venezuela, Puerto Rico – and also Latinos born here. A new horizon opened up for me, because this explosion of cultures in the US makes you realize that you didn’t know as much about Latin America as you thought you did. The idea was to create content not just for migrants, but the fact of living here pushed that idea. Because deep down, we consider the US to be a Latin American country – it is full of people who speak Spanish.

From the beginning, we wanted our stories to have a universal appeal, so that everyone could somehow relate to them. They are not too newsworthy or too local – yet they are entertaining enough for a listener from the Bronx in New York to be interested in a story from Chile; or for someone from Colombia to be following a story from Guatemala.

Why did you choose the podcast format and not broadcast radio?

When we first started, we were radio listeners but had no idea how that industry worked. We started looking for funding for our project here in the US, and realized that there was no room for another live radio station and that nobody was going to give us the means to create one. We immediately saw that the future was digital and realized that if Radio Ambulante was going to find an audience, it would be in digital media.

How do you interact with your listeners?

Nowadays, it is impossible to ignore your audience. The digital world offers a means of constant interaction, that may not be so easy to find on the air. In fact, for us, more than an audience, it is a community of listeners – who listen to us, tell their friends about us, and give us their positive or negative comments. The listeners feel empowered, and they can also be  quite demanding. They ask us for things, and sometimes point out our mistakes – we have a very direct line to them.

About three years ago, we hired Colombian journalist Jorge Caraballo as a growth editor,  to strengthen the show’s relationship with its community of listeners. In this way, we opened other channels of communication, like a group on WhatsApp, for the most enthusiastic listeners. This allowed us to strengthen our bulletin and to build even more direct communication with listeners. We also recently launched Listening Clubs, which are like book clubs, but for podcasts – where people get together to listen to one of our stories and then comment on it.

What is your business model and how do you sustain it?

Radio Ambulante is an expensive project. Today, there are twenty of us, who do not produce news or do a certain number of articles per day. We produce thirty episodes a year – which is not a lot, but they take time to produce because they require a lot of editorial work and rigour. We received support from a few foundations. And three years ago, we signed an exclusive distribution contract with NPR, (National Public Radio, the US non-profit news and media organization), which distributes our content as podcasts and pays us for exclusive rights. Every year, we also organize live events that are held in theatres, and offer a membership programme for those who want to support us on a regular basis.

We have recently been trying to derive new products from our existing content, to give them added value. These derivatives are not expensive to produce, and allow us to monetize our catalogue. For example, we are currently looking at two additional sources of income, based on the 150 episodes that we already have in our catalogue.

We have just launched Lupa, the first initiative. It is an application that enables people with an intermediate or advanced level of Spanish to perfect their language through our programmes. A significant segment of our audience is made up of people studying Spanish who match this profile, especially in the US and Canada. We are very enthusiastic about this project.

Our second idea is much more long-term – it involves looking for intellectual property opportunities in movies or television series. We think that some of the stories in our catalogue might one day be the basis for a fictionalized story or screenplay that could generate royalties for us.

How do you choose your stories?

We look for stories with characters rather than choosing topics. It is key that they have a narrative arc, with a beginning and an end. As we are present in various parts of the world, particularly in American and Latin American cities, and even in London, we receive stories all year round.

We know, for example, that stories about drug dealers attract many clicks, but those are already being made by others, and we are not interested in giving a human face to these villains. We think that there are other stories that deserve to come to light. Listeners like stories that are well-told, with many scenes and several voices – stories that make them dream, that connect them with their childhoods, that value ambition or effort. There are stories that we all see every day in the media, but here we can recount them unhurriedly and give ourselves the pleasure of going deeper into topics – which the audience appreciates. The average production time for each story is six months.

One last question, that could well have been the first: why are you called Radio Ambulante?

We really had a tough time deciding on the name – it was hard to find! It refers to the street vendors – simply called ambulantes – who are everywhere in our Latin American cities.  These are super-brave, resilient people, who walk, travelling around the city, moving all over the public space; they are persevering. We felt that this image reflected us particularly well. And we loved the idea of our logo, of someone carrying a radio.