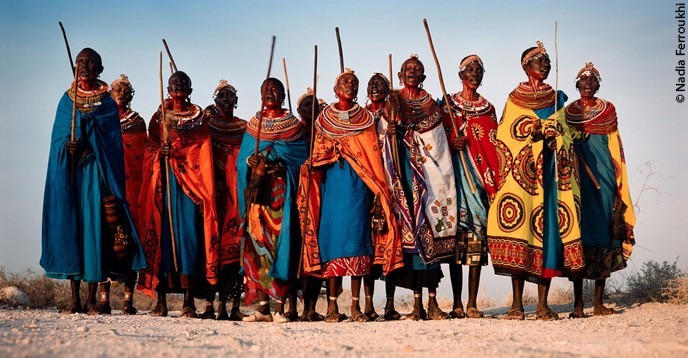 Men are prohibited in Tumai, central Kenya. Since 2001, this village has provided  refuge for women of the Samburu tribe who have been victims of domestic violence.

This photo reportage marks the celebration of International Women’s Day on 8 March.

In 2009, photographer Nadia Ferroukhi was on an assignment in Kenya. As she stepped out of the bus, which had stopped in the middle of the bush, she recognized Mohammed, who had served as a guide in a television documentary about Umoja, a village forbidden to men.

Established in 1991 by women of the Samburu ethnic group, this village – near Mount Kenya, some 300 kilometres from Nairobi – provides a home to women who are divorced,  rejected or beaten by their husbands. This subject aroused her curiosity to such an extent that she decided to track down these women, who lived in exile from their own environments.

Born in Paris and raised alongside a feminist sister, the Czech-Algerian photographer has long been interested in strong women who occupy prominent places in their communities. “As a woman, it’s natural to be interested in the plight of women,” she explains. “As a photographer, you can express some of what they are going through.”

After this chance meeting, Mohammed became Ferroukhi’s guide. He accompanied her in her work with the women of Umoja. But not for long. The village had become a tourist attraction because of the media exposure. So Rebecca, the village chief, allowed Ferroukhi only three days to complete her assignment, at specified times and for a fee. “As a photographer, it’s important to be present as much as possible, so that you are forgotten and can capture the moment, the light. You can’t follow office hours,” she noted, adding that she refused to comply with the conditions imposed.

Her guide then took her to Tumai, another women-only village. It was founded  by Chili, who had originally lived in Umoja. “There, I was welcomed like a princess, with dances. I was the first person to report on this village,” Ferroukhi said.

The inhabitants of Tumai are completely self-sufficient. These “lionesses of the bush”, as they are known locally – with a touch of irony and a lot of respect – rear their own goats and perform sacred rituals and other tasks usually undertaken by men, such as building huts and hunting. The practice of excision is prohibited here. All important decisions are taken by a majority vote. Only women who are divorced are allowed to live here. Boys are permitted,  but only until they are 16, after which they must leave.

Other women-only villages have been created along the lines of Umoja and Tumai. “Living conditions are difficult, but for these women, it is the price of freedom,” says Ferroukhi. The photographer has visited nine other countries where women play a central role in societies – economically, socially, and sometimes, politically.

Through her reading, travels, and above all, her meeting with the French ethnologist, anthropologist and feminist Françoise Héritier (1933-2017), Ferroukhi became interested in the much-discussed notion of matriarchy. Her series In the Name of Mother came from this research.

What indigenous matriarchal societies have in common is that they are true gender-egalitarian societies – as described by the German matriarchy scholar Heide Goettner-Abendroth in her book, Matriarchal Societies: Studies on Indigenous Cultures Across the Globe. Some of these societies are secular, horizontal, non-hierarchical, and essentially agrarian. The children are related primarily to their mother. They bear her name and live mainly in her clan house, even when they have become adults. The inheritance of property and goods is from mother to daughter.

Ferroukhi has lived among the Tuareg of Algeria, the Mosuo in China, the Navajo in the United States, and the Minangkabau of Indonesia. She has also lived with the inhabitants of the island of Grande Comore in Comoros, the island of Canhabaque in Guinea-Bissau, and the town of Juchitán in Mexico. The photos here are accompanied by texts written by the photographer, in which she details the particularities of each community.

Portraying matriarchy is a challenge. “People often expect a spectacular result. But in fact, I photograph everyday life,” Ferroukhi insists. The daily life of societies which, far from  clichés, base their social organization, as Goettner-Abendroth puts it, “on the equal value of each member.”

The island of Ushant (Ouessant in French) is located at the extreme tip of Brittany, in France. It harbours a social curiosity – since the seventeenth century, the island’s male population has left massively to join the navy, particularly the merchant navy. Until recently, the men left Ushant for months, even years, at a time, leaving the material and social organization of the island to the women.

Eighty per cent of men on Ushant island off France’s Atlantic coast, were seafarers. It was the women who cultivated the land in their absence. 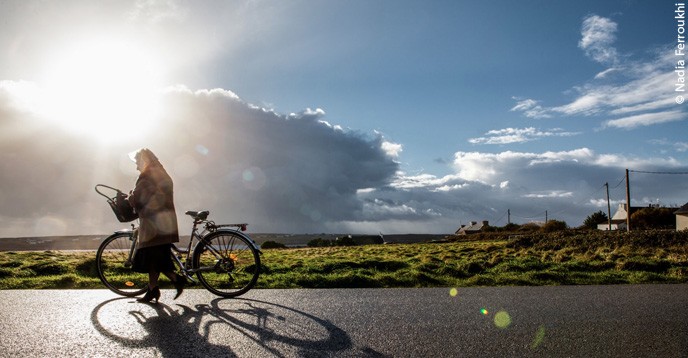 The social life of the Navajo nation is organized around women, according to a matrilineal system in which titles, names and property are transmitted through female lineage. When a Navajo girl reaches puberty, she must go through the Kinaaldá, a four-day ceremony which marks her passage from childhood to womanhood. This ceremony is linked to the Navajo myth of Changing Woman, the first woman on earth who was able to bear children. On the reservation, women are generally more active than men. It is not uncommon for them to resume their education late in life, even after having children.

These Native American Navajo women work in a coal mine, ensuring their complete financial independence. 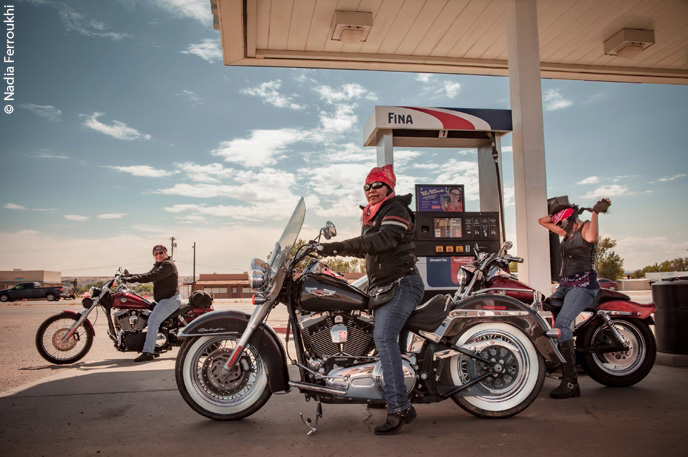 In the foothills of the Himalayas, between the provinces of Yunnan and Sichuan in southwest China, the Mosuo community is organized on matrilineal lines. It is the woman who bears the family name and holds the reins of the household. Heritage is passed down from mother to daughter. Love relationships are lived without a marriage contract or moral constraints – at the sole rhythm of the feelings and the will of the women. The rules require the man leave his lover’s room before dawn – this is the custom of the zouhun, or “walking marriages”. The man does not assume the status of father. But he can play the role of uncle and help his sister raise her children.

The Dabu, the matriarch who heads the Mosuo family. This key role is held by the oldest woman in her lineage. She is the one who passes on the name and property, manages the money and organizes religious ceremonies. 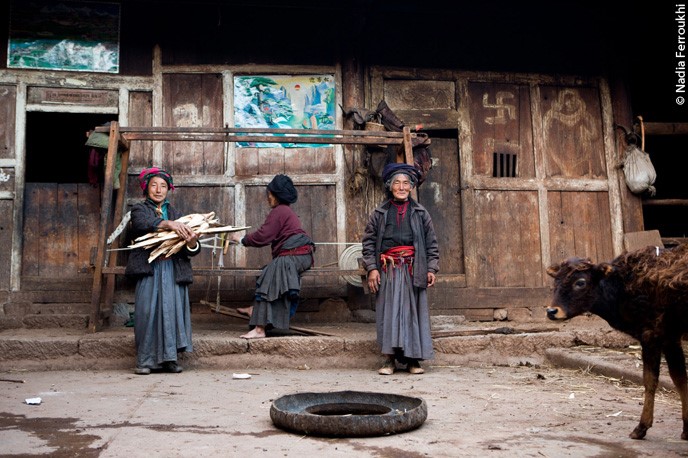 Comorian society is steeped in Bantu African matriarchal traditions and the Islamic religion. Every individual is born and lives at their mother’s, aunt’s or grandmother’s home, following the maternal line. It is the woman who inherits and owns the mania houli heritage – particularly the house, built by her father or maternal uncle on the family land. The traditional anda or Grand Marriage, which is more widespread on Grande Comore than on the other three islands – Anjouan, Mohéli and Mayotte – is a prerequisite for anyone who wishes to rise in the Comorian social hierarchy.

A young bride on the island of Grande Comore. After the wedding, the husband moves into her house built by her family, where he is considered a guest of the matriclan. 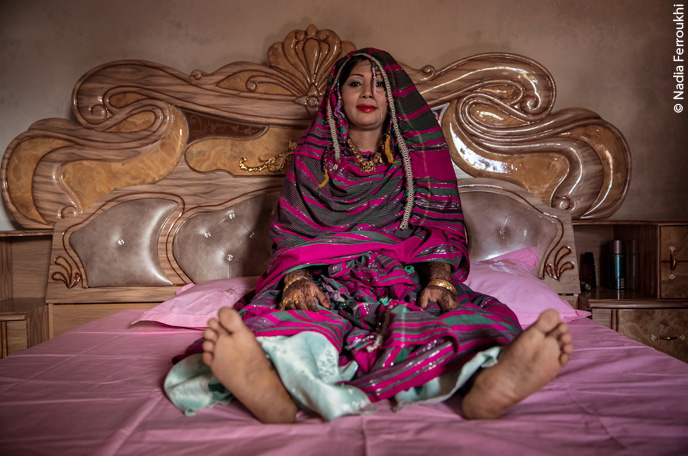 Juchitán, a town of 78,000 inhabitants in the Mexican state of Oaxaca is the birthplace of    painter Frida Kahlo’s mother. Over the centuries, men and women here have developed clearly identified forms of autonomy. Women manage commerce, the organization of festivals, the house, and the street. Agriculture, fishing and politics are the responsibility of men. This is one of the few places in Mexico where the Zapotec language and dialects are still spoken. Used in exchanges between female neighbours and passers-by, this language has enabled the development of a remarkable solidarity between women. The name, the house and the heritage are passed down through the women. The birth of a daughter is therefore a great source of joy.

The women in Juchitán, a city in southern Mexico, play a major social and economic role, enjoying a rare independence in this patriarchal society. 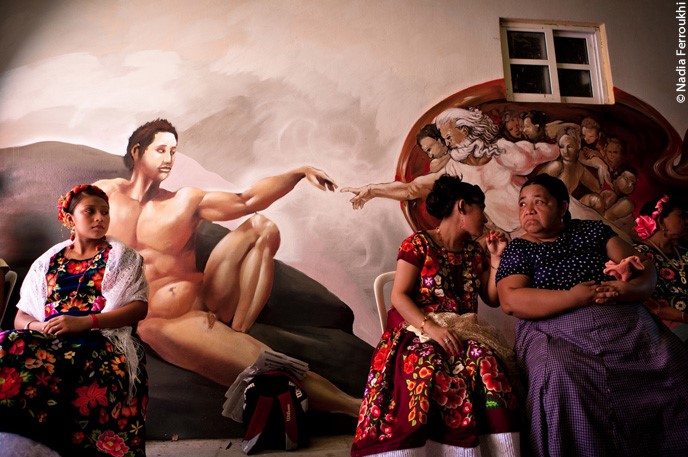 The way of life in the archipelagos, particularly on the island of Canhabaque (population 3,500), has barely been influenced by modern civilization, if at all. Here, houses are owned by the women, and it is the men who move in with their wives. Although the father passes on his family name to his children, it is the mother who chooses the first name – and it is to her clan that they are related. The island is ruled by a queen. There is also a king (who is not the queen’s husband), but his role is limited – he is simply a spokesman. Each village is governed by a council of women, elected for a lifelong term.

Two young girls defunto. This is the name given to young girls who must go through all the stages of female initiation, on the island of Canhabaque, Guinea-Bissau. 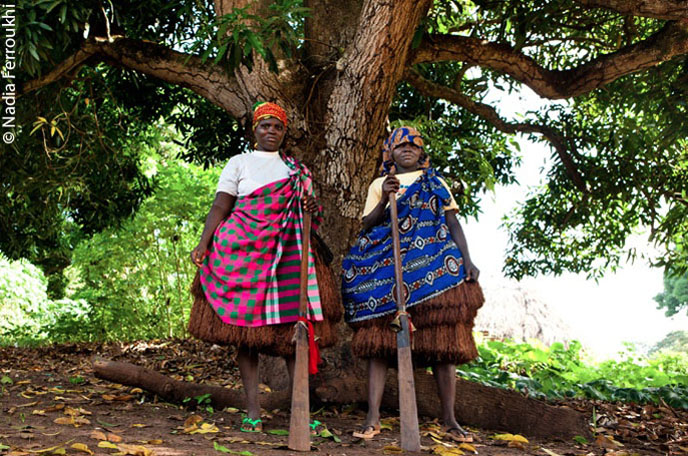 Today, Kihnu, a tiny Estonian island in the Baltic sea, has some 500 inhabitants, compared to 7,000 during the Soviet era. Traditionally, when the men went to sea, the women took on their tasks, such as working in the fields. Since the mid-nineteenth century, the women of Kihnu have taken over, managing the affairs of the community. Although men make up roughly half the population of the island today, it is still their mothers, wives and daughters who are responsible for education, culture, community life and craft traditions. Kihnu is often referred to as the Isle of Women in tourist guides. This simplistic image is not to the liking of those concerned, though. The women acknowledge that they play a leading role in decision-making, but in a society where men’s incomes remain the basis of household finances.

Celebrated folk singer Virve Köster (born 1928) is the guardian of the centuries-old cultural traditions of Kihnu, which are expressed in song, dance and craftsmanship. These traditions were inscribed on UNESCO's Representative List of Intangible Cultural Heritage in 2008. 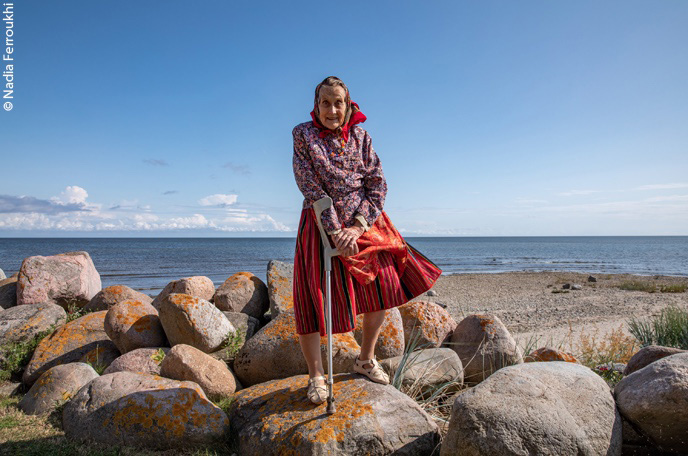 The Tuareg woman does not wear a veil – the man does. She has complete freedom to choose her husband. She knows the tifinagh alphabet, the tales and legends, and teaches them to her children. The tent and its contents belong to her. She manages and supervises the camp when the man is away, and participates in all decision-making, even when he is present. She is involved in all social, cultural and economic matters. It is through the maternal lineage that all aristocratic powers are transmitted. But the policies of sedentarization in the 1970s and 1980s, repeated droughts, and the attractions of modernity for young people have undermined this way of life.

In the event of a break-up or death, the Targuia – a Tuareg woman –  leaves the nomadic camp with her children, her dowry, the tent, and even the camels left to her by her father. 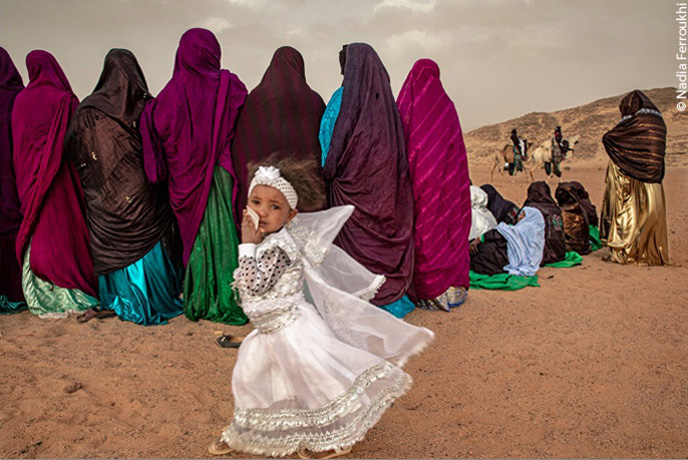 The world’s largest matrilineal society, the Minangkabau, inhabit the highlands of the west coast of Sumatra in Indonesia. According to their social system, all hereditary property is passed on from mother to daughter. The biological father is not the child’s guardian; it is the mamak, the uncle, who plays that role. During the marriage ceremony, the wife goes to pick up her husband at his home, accompanied by the women of her family. The adat, or customary law, determines a set of unwritten, traditional rules on matrimonial and property matters. Under these rules, in the event of a divorce, the husband must leave the home, and the woman retains custody of the children and the house.

Among the Minangkabau of Indonesia, it is the mamak – the eldest of the maternal uncles – not the father, who is the head of the matrilineal lineage. 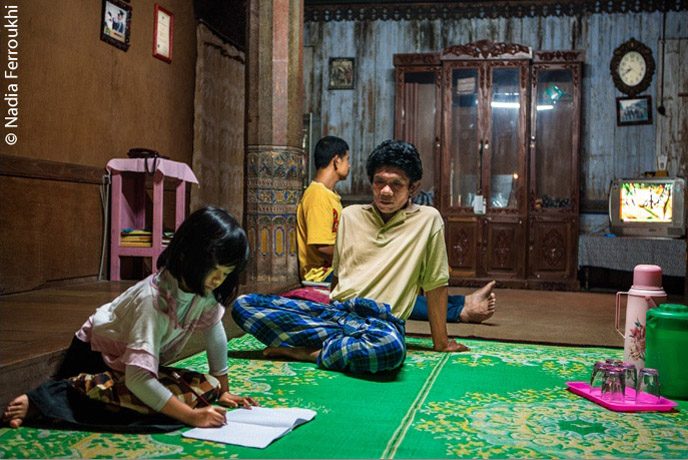