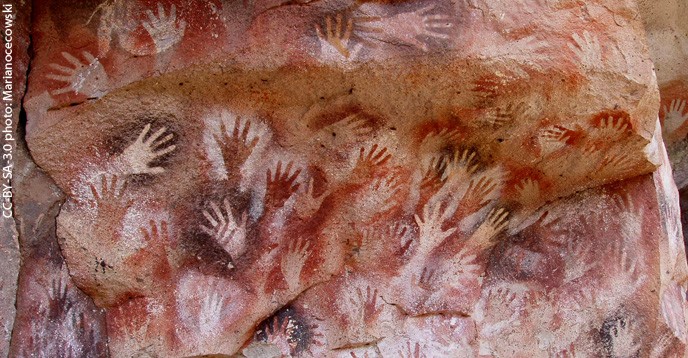 Cueva de las Manos, Cave of the Hands, in Río Pinturas – with the stencilled outlines of human hands – is considered to be one of the most important habitat sites for early hunter-gatherer groups in South America. In Santa Cruz province, Argentina.

Our image of the wild and warlike prehistoric human, which persists even today, is actually a myth, devised in the second half of the nineteenth century. Archaeological research shows that, in fact, collective violence emerged with the sedentarization of communities and the transition from a predation economy to a production economy.

Even if today, prehistoric humans are still perceived in the popular imagination as violent beings in perpetual conflict, were these societies really as violent as ours? Only archaeological remains can provide answers to these questions. To characterize a violent act, archaeologists study the impacts of projectiles and injuries on human bones, assess the state of preservation of the skeletons, and analyse the environment in which they were discovered.

Currently, the most ancient traces of violence that have been found are those resulting from the practice of cannibalism. Marks of disarticulation, emaciation  (the stripping of flesh), fracturing and calcination have been observed on Palaeolithic human bones. This relatively rare practice – which appeared 780,000 years ago and has been documented in the Sierra de Atapuerca mountains in Spain – persisted in other nomadic hunter-gatherer societies of the Palaeolithic age, and among Neolithic agro-pastoralists. But this evidence of one human’s action on another human’s body raises questions: were the victims killed before they were eaten? Indeed, dietary cannibalism can be practised on individuals who are already dead – as in funerary endocannibalism, which consists of eating a member of one’s own family after their death.

Only the presence of traces on human bones of beheading, or injuries due to the impact of projectiles or blunt instruments causing death, can support the hypothesis that the consumed victims were violently killed. In the Palaeolithic era, these marks were observed in fewer than thirty cases. The question remains: did the “eaters” and the “eaten” belong to the same community? Although today the practice of cannibalism – both dietary and ritual – is documented at several Palaeolithic sites, it is often difficult to know whether it was an endocannibalism or an exocannibalism.

Excluding this particular context, just under a dozen cases of violence – projectile impacts, blows to the head – have been identified on several hundred human bones dating back more than 12,000 years. But are these injuries the result of an accident, or of an act of violence during an interpersonal, intragroup or intergroup conflict? For these early periods, the distinction is difficult to make. However, in many cases, injuries, such as those caused by a shock or a blow to the head, had healed. These persons were therefore not killed, which would tend to prove that their wounds were the result of an accident, or a quarrel between two people.

In other cases, the question of the identity of the aggressor arises again – was the individual a member of the victim's community or an outsider? This remains unanswered. In addition, the use of human bones in the manufacture of domestic objects or ornaments also raises the question of the conditions of death of the individuals whose bones they are. In most of these cases, it is difficult to conclude that the death was violent, because they can just as easily attest to a particular funeral procedure.

Archaeological data shows that a form of violence already existed in the Palaeolithic era, notably ceremonies involving cannibalism. But no evidence has been found so far of collective violence. In the majority of the cases retained and studied (outside the context of cannibalism), only one individual was a victim of violence – which may reflect the existence of interpersonal conflicts (which were rarely fatal) or sacrificial rites.

It is therefore reasonable to assume that there was no war in the Palaeolithic period, strictly speaking. There are several reasons that could explain this absence – a small population, a sufficiently rich and diversified subsistence territory, a lack of resources, and a social structure that was egalitarian and less hierarchical.

Among these small groups of nomadic hunter-gatherers, collaboration and mutual support among all members of the clan were necessary for their survival. In addition, a good understanding between them was essential to ensure reproduction, and therefore progeny. The so-called “savagery” of prehistoric humans is thus only a myth – devised in the second half of the nineteenth century and the early twentieth century, to reinforce the discourse on the progress accomplished since the birth of humanity and the concept of “civilization”. This image of “violent and warlike” prehistoric humans is the result of a scholarly construction popularized by artists and writers.

The development of conflicts

Collective violence seems to have appeared with the sedentarization of  communities at the end of the Palaeolithic era, around 13,000 BC in the Near East; but, again, only one or a few individuals were killed. This may reflect the existence of conflicts within the group, but also the appearance of human sacrifices.

Two sites are exceptions to this: Site 117 of Jebel Sahaba, on the right bank of the Nile on the northern border of Sudan in Egypt; and Nataruk, west of Lake Turkana in Kenya.

In the Jebel Sahaba necropolis, dated between 14,340 and 13,140 years before the present, half of the fifty-nine skeletons (discovered in 1964) of men, women and children of all ages – excavated from several pits covered with stone slabs – had died violent deaths.

The deaths were either a result of blows to the head in particular, or after their bodies were pierced by spearheads or stone projectile tips, some of which were found still embedded in their remains. Three of the men were probably lying on the ground when they were put to death. Even if the question whether all fifty-nine bodies were buried at the same time remains unanswered, this site represents the first proven case of collective violence. Was it intragroup or intergroup aggression? The debate remains open.

About 10,000 years ago in Nataruk, twenty-seven individuals, including men, women and children, were probably thrown into a swamp. Ten of the twelve bodies that were perfectly preserved, bear lesions caused by acts of violence and two of these, including a pregnant woman, had their hands tied. First discovered in 2012, far from a habitat, this small group of hunter-gatherers may have been exterminated by another group during a sojourn away from their homes.

From predation to production

Traces of acts of violence are more frequent in the Neolithic period. This period was marked by many changes of a different nature. They were environmental (global warming); economic (domestication of plants and animals, search for new territories, surplus and storage of food); social and societal (sedentarization, local population explosion, the emergence of an elite and castes) and, at the end of this period, religious (goddesses gave way to male divinities).

In several necropolises, dated between about 8,000 and 6,500 years ago, the type of weapons used (few arrow impacts) and the fragments of pottery associated with the bodies, attest to internal or inter-village conflicts. The remains of these victims testify to tragic events linked to a crisis (demographic, of governance, epidemiological) or to the practice of rites – funerary, propitiatory, expiatory or foundational – with human sacrifices sometimes followed by cannibal meals.

However, the existence of conflict between two groups or communities cannot be ruled out, as shown by certain paintings on the walls of rock shelters in Spain. Dated between 10,000 and 6,500 before the current era (BCE), they represent scenes of armed encounters between groups of archers – scenes that are absent in Palaeolithic parietal art.

The change in the economy (from predation to production), which led to a radical change in social structures very early on, seems to have played a major role in the development of conflicts. Unlike the exploitation of resources in the wild, food production allowed the option of a food surplus, that gave rise to the concept of ownership – and, consequently, the emergence of inequalities.

Very quickly, the stored commodities aroused envy and provoked internal struggles, but were also potential spoils in conflicts between communities. As evidenced by the emergence in Europe during the Neolithic period, of figures of the chief and warrior (visible in rock art and burials), this change in economy also led to a hierarchical structure within agro-pastoral societies. The emergence of an elite and castes included the warriors and as a consequence, the slaves needed to do the agricultural work, in particular.

In addition, the emergence of an elite with its own interests and rivalries provoked internal power struggles and intercommunity conflicts. It was only from 5,500 BC, marked by the arrival of new migrants, that traces of conflicts between villages became much more frequent. These would proliferate in the Bronze Age, which began before 3,000 BC. It was during this period, when genuine war weapons made out of metal appeared, that war became institutionalized.

The historical and social causes of violence

While it is difficult today to assess the true extent of acts of violence in prehistoric times – as the evaluation of the importance of this phenomenon is probably qualified by the state of findings and studies – it is possible to put forward some ideas. It appears, on the one hand, that the number of prehistoric sites in which acts of violence have been observed is low, in relation to the geographical extent and duration of the period under consideration (several 100,000 years).

On the other hand, we could conclude that while violent behaviour towards others is old, war has not always existed. Its origins appear to be correlated with the development of the production economy, which led very early on to a radical change in social structures.

Violence is not inscribed in our genes. Its appearance has historical and social causes – the concept of “primordial (original) violence” is a myth. War is therefore not inseparable from the human condition, but is the product of societies, and the cultures it generates. As the studies of early human societies show, when faced with crises, a community is more resilient if it is based on co-operation and mutual support, rather than on individualism and competition.

As for the reality of our ancestors' lives, it probably lies somewhere between the two visions – both of them mythical – of the Hobbesian Aubes cruelles (Cruel dawns, a book of poems on prehistoric times, by the scientist and writer, Henri-Jacques Proumen, 1879-1962), and the golden age of human flourishing imagined by the philosopher Jean-Jacques Rousseau.