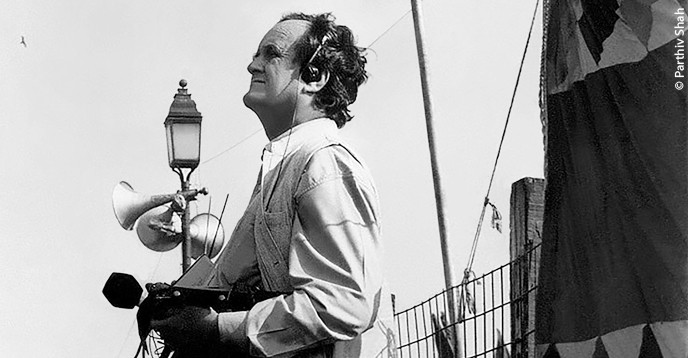 Mark Tully at a political rally in New Delhi, 1991.

For over a quarter of a century, one of the most recognized and trusted radio voices in India was that of Mark Tully. This British correspondent for the BBC has covered all the momentous events that marked the country's recent history, until the mid-1990s. He is a living witness of the time when radio was the main medium to reach the masses, telephone communications were unreliable, and radio recordings were made on magnetic tapes that had to be physically sent to the editorial offices.

December 1992: The sixteenth-century Babri Masjid (mosque) in Ayodhya, had just been demolished by Hindu extremists, who claimed it was built on the site of an ancient Hindu temple. Thousands of militants charged through the streets of this village in the Indian state of Uttar Pradesh, attacking journalists who were there to cover this dramatic moment in the country's history. As they destroyed the media’s photo and television cameras, one foreign journalist was particularly targeted. The mob shouted out his name: Mark Tully! The British Broadcasting Corporation (BBC) bureau chief for India and South Asia narrowly escaped being attacked. He stayed locked up in a small temple, till he was finally released by three Indian colleagues and brought to safety after the intervention of a local official.

For more than thirty years, the radio – and occasionally, television – correspondent bore the weighty responsibility of having one of the most listened-to voices in a country of over a billion inhabitants. He was threatened, beaten, and even expelled from India – but he always returned. He eventually never left, making New Delhi his home.

The country, it must be said, was, in some ways, his own. Tully was born in Calcutta in 1935 into a wealthy family of British settlers. His father was the director of a railroad and a partner in a holding company that owned a bank, an insurance firm, and tea plantations. After the Second World War, his parents sent him to boarding school in the United Kingdom. He later took theology courses at Cambridge University and then entered a seminary.

“I thought I might have a calling to be a priest. But I lasted there for only two terms,” reminisces Tully, now 84, in an interview to the UNESCO Courier in his apartment in New Delhi’s historic Nizamuddin district. “I was always rather rebellious and I didn’t like the discipline of the seminary. Also, I was a good beer drinker,” he admits with a pinched smile.

Tully’s career as a journalist brought him back to the land of his birth. In 1965, he was hired as an administrator by the BBC's New Delhi office. But he quickly ended up behind the microphone. “My first broadcast was a report on a vintage car rally. I remember they stopped and had a picnic. And I recorded a maharaja saying, ‘why don’t you stop and have a glass of champagne?’”

Tully returned to London in 1969, to head the Hindi service and then the West Asia service – for which he covered the Bangladesh War of Independence in 1971. "I was among the first journalists to be let into Bangladesh. This was the most important thing that happened to me in my career and that made my name and my reputation,” he said.

Although he travelled with the army, which intimidated some of the people he met, the ace reporter could still observe the extent of the humanitarian crisis brought about by the war. Most of his dispatches were reported to the bureau by telephone.  “There was no way to send the tapes to the office quickly enough, I had to carry them back to London,” Tully explains. ”I was recording mainly straightforward voice reports on tape, using a Uher tape recorder. At the time, we could afford to work with studio managers and sound engineers, who were real wizards.”

Hanging above a chest of drawers in his apartment, a large black-and-white photo taken a few months after the war, shows a young Tully with Sheikh Mujibur Rahman, the first president of the newly-formed Bangladesh.

From that moment on, his career took off. In 1971, Tully was appointed BBC correspondent in New Delhi, and named bureau chief a few years later, responsible for covering the South Asia region – which included India, Pakistan, Bangladesh and Sri Lanka. It was a post he held for twenty years, until his retirement in 1994. His distinctive voice, the voice of the BBC, was recognized and revered by generations of Indians.

During this time, the intrepid journalist covered insurgencies, elections, and reported on a diverse range of subjects including political corruption, bonded labour, and Sufi mysticism. In the early 1990s, Tully reported extensively on India’s modernization and the social changes this inevitably brought about. This reporting is also reflected in India in Slow Motion, a book published in 2002, co-authored with his partner, British author Gillian Wright.

In the 1970s and 1980s, there were many technical challenges that international radio correspondents faced in India. For the recording of each sound report, the Delhi office had to book an international telephone call, or use the public radio station, All India Radio (AIR), which had better dedicated lines. Outside the capital, the task became even more challenging.

At the Simla summit of 1972, held in this mountain town in north India where a peace accord was signed by India and Pakistan to end the 1971 war, “the telephone was so hopeless that we had to send telegrams to London and they were read on the air,” recalls Tully. The tapes of the reports were always physically sent via aeroplane.

The "voice of truth"

At a time when AIR, the country’s main radio service, was controlled by the government, the BBC represented the “voice of truth”, according to Madhu Jain, editor-in-chief of the literary and cultural magazine, The Indian Quarterly. The British radio channel had more broadcasting relays that reached the smallest Indian villages. Tully soon became a celebrity whose voice was recognized and trusted throughout the subcontinent. “He was very respected by his listeners because he was objective and measured,” says Jain, who knows him well. She remembers his unique delivery. “He has this kind of voice of the upper-class elite with a good education. A bit dated now, because today, young people speak faster,” she adds.

Working alongside Tully, Satish Jacob, who was the BBC’s deputy bureau chief between 1978 and 2003, also made a major contribution to the foreign broadcaster’s credibility. Though the London office sometimes commented on his Indian accent, Jacob gave the BBC one of its most impressive scoops: the announcement of Prime Minister Indira Gandhi’s assassination on 31 October 1984.

That morning, informed that someone had left the prime minister’s residence in an ambulance, Jacob went to the hospital and was able to get a doctor to tell him what had happened. “When I asked him whether her condition was serious, he told me that Indira Gandhi's whole body was riddled with bullets,” recalls Jacob, who is now 80. “I ran out of the hospital like a world-class sprinter and drove straight to the office and asked them to book a call to London. I didn't have the time to write anything. ‘There has been an attempt on Mrs Gandhi’s life, and she has been admitted to an elite hospital in Delhi,’ was all I could say.”

The Indian prime minister died at 10.50 a.m., but the country’s public radio did not announce her death until several hours later, at 6 p.m., when Rajiv Gandhi, her son, officially confirmed the information. Even today, Indians across the country still remember that they first heard about Indira Gandhi's assassination on the BBC.

Tully finally resigned from his job as a radio correspondent in 1994, but remained in India. He continued to host Something Understood, a programme about spirituality, on BBC’s Radio 4, till it was discontinued in April 2019, after twenty-four years. “I have a lot of affection for India, that is a country worth fighting for as a journalist,” he said. “And it would have been a poor reflection of what I have done (all these years) if I had to leave just because I have lost the support of the mighty organization!”

His adopted country returned this affection by awarding him two of India's highest civilian honours – the Padma Shri (for distinguished service) and the Padma Bhushan (for distinguished service of higher order). At home, the British queen knighted him for his contribution to journalism in 2002. Tully, who retains his strong English accent, insists these distinctions are “embarrassing, but it would be more arrogant to refuse them.” They do not seem to have changed this humble man, who remains deeply attached to radio, the “extraordinary medium that allows us to speak directly to people.”