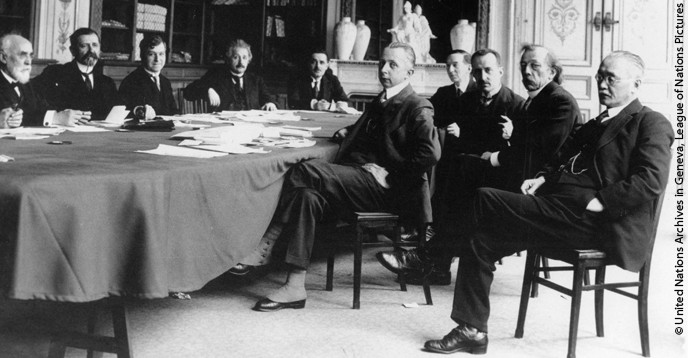 A plenary session of the International Commission on Intellectual Cooperation, attended by well-known figures in culture and science, among them Albert Einstein. Geneva, in the 1920s.

A hundred years ago, on 10 January 1920, the League of Nations was born out of the rubble of the First World War. The International Institute of Intellectual Cooperation (IIIC), UNESCO's predecessor, was created in its wake. The aim was to overcome the national egoisms that had led to the disaster, by focusing on multilateralism. This dream would not survive the inter-war period. But in an era facing challenges such as war, terrorism, economic crises and climate change, the credo of the founding fathers of the League for a more united world has not lost any of its relevance.

National interests and multilateralism are not necessarily antagonistic. They can even be complementary. It was from this idea that the League of Nations was born. Far from being idealistic dreamers, its founders were convinced that the “spirit of internationality” and state realism were inextricably linked.

The League of Nations was established as part of the Treaty of Versailles, which marked the end of the First World War. The creation of this new intergovernmental organization was inspired by United States President Woodrow Wilson’s Fourteen Points declaration – outlining his proposals for a post-war peace settlement – which he presented to the US Congress in January 1918.

The idea of a “society of nations”, however, is much older. It dates back to international conferences in the second half of the nineteenth century. It was during the Hague Peace Conferences in 1899 and 1907 that the decisive move from the idea of the Concert of Nations – orchestrated by the major European powers – to true, inclusive multilateralism, was made.

At the 1907 conference, European states had become a minority at an intergovernmental meeting for the first time – due in particular to the presence of eighteen Latin American states, out of the total of forty-four states. The creation of the League represented a historical breakthrough and precedent. This was in spite of important limitations, which  reflected the historical context of the time – in particular, colonialism, and the refusal of governments to accept the principle of gender equality.

Like the United Nations twenty-five years later, the League emerged from a world war – with the firm determination that never again should such a tragedy be allowed to happen. But the lack of will on the part of the major powers incapacitated the League from effectively preventing or sanctioning the territorial aggressions of Japan, Italy and Germany in the 1930s. The outbreak of a second devastating world war saw the dream completely shattered – until the birth of the UN on 24 October 1945 brought it back to life, against all odds.

Soon after its creation, the League’s members accepted the idea – of the French statesman and scholar Léon Bourgeois (1851-1925) and winner of the 1920 Nobel Peace prize – that international intellectual co-operation was an essential precondition for peace. Thus, in 1922,  the International Commission on Intellectual Cooperation was created. The International Institute of Intellectual Cooperation (IIIC), the executive branch of the commission, was established in 1925. These organizations were the predecessors of UNESCO, or, “the Forgotten UNESCO”, as French historian Jean-Jacques Renoliet called it.

In concrete terms, the IIIC established international norms and standards, organized conferences and published books on themes such as The Future of Culture; The Future of the European Spirit; Towards a New Humanism and Europe – Latin America (about cultural relations). Probably its most famous publication was Why War?, an exchange of letters between Albert Einstein and Sigmund Freud, published by the institute in 1933, which discussed the causes of war, and how to prevent it.

The IIIC quickly faced the challenges related to the inter-war context, and was forced to reflect on the difficulties of its time. For example, in 1933, there was a proposal that the organization reprint the books that were burned by the Nazis in Germany. Its leadership  refrained from doing so out of fear of offending Germany, and provoking the country’s departure from the institute. Eventually, Germany left the League, but for different reasons.

When UNESCO was created, its founders learned from the experience of IIIC, both from its successes and failures. Part of the institute’s weakness was the over-emphasis on co-operation among intellectuals ("a society of minds"), and the relatively secondary role of politics. This is why a greater role was reserved for States within UNESCO's structure. In addition, education, that had not played a particularly prominent role in the IIIC, became UNESCO's main programme sector – emphasizing its fundamental significance for the Organization’s peacebuilding mission.

In several areas, the IIIC achieved a number of successes, which laid the foundations that  UNESCO could build on. These include work on languages and translations; the organization of international conferences that encourage debates on key philosophical subjects; and standard-setting work – in the fields of libraries and museums, for example.

The preservation of cultural heritage was already one of the concerns of the IIIC, as was cultural diversity – called “the particularity of cultures” at the time. Work on textbooks  – particularly on history and geography – with a view to fighting prejudices and stereotypes, was started by the IIIC and continued by UNESCO. The role of the mass media – radio in particular – for the promotion of peace was another priority area for the IIIC, which was taken up by UNESCO..

The IIIC was what the American historian, Jay Winter, called “a small utopia”. Its archives – now a part of UNESCO’s archives – bear witness to dreams and hopes that were momentarily defeated, but which were reborn after the Second World War. The founding of the institute represents the first time in the history of humanity that there was an attempt to create a truly universal organization for intellectual co-operation. There were many shortcomings, but it was a beginning, a first attempt.

The work of the IIIC, its successes and failures, its political strengths and weaknesses – all this is reflected in the archives. In 2017, their universal value was acknowledged and highlighted by their inclusion in UNESCO’s Memory of the World Register. In the same year, a project was launched to digitize these records (and completed in 2019), making them universally accessible online.

The creation of the League of Nations and its associated bodies for the promotion of intellectual co-operation, represented the concrete emergence of a dream of universality and global solidarity of humanity. This seems more relevant than ever today, when it is under fierce attack in many parts of the world. The dream is still with us.

The International Institute of Intellectual Co-operation archives, from 1921 to 1954, are available online.

A Danish historian, Jens Boel was Chief Archivist of the UNESCO archives from 1995 to 2017. He initiated the UNESCO History Project in 2004 and organized international conferences on UNESCO's history to encourage the use of its archives. Boel's next book is on the history of the Intergovernmental Oceanographic Commission (IOC), created in 1960.