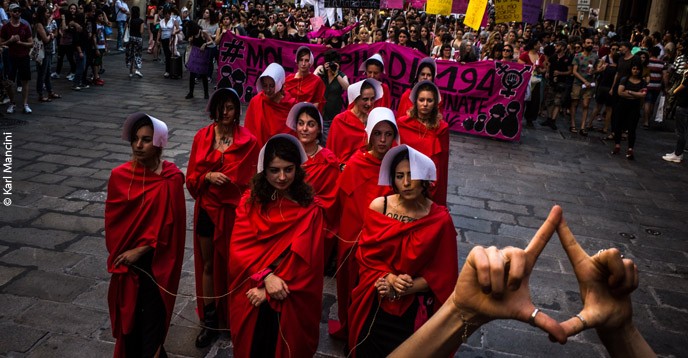 The Italian feminist movement Non Una Di Meno (Not one less), born in 2016 in the wake of the Argentinian movement of the same name, Ni Una Menos, to denounce gender violence and feminicide.

Two years after the #MeToo movement erupted in the United States and twenty-five years after the Fourth World Conference on Women in Beijing, Helen Pankhurst assesses the different waves of feminism over the last 100 years. The activist and author also writes about the roles of her great-grandmother Emmeline Pankhurst and grandmother Sylvia, leaders of the suffragette movement, who helped win British women the right to vote in the early twentieth century.

Far from seeming like something in history, the resistance of the suffragettes a hundred years ago, with their demand for equal political representation, seems as relevant today as it was  then. There seems to be something in the air, globally, that is a reminder of those early struggles, which my great-grandmother spear-headed. This includes millions of feminists marching in the streets again, challenging heads of states and governments who are openly adopting policies that are socially regressive.

In spite of the fact that huge progress has been made, women the world over are still fighting for equality. Why, at the present rate, will we have to wait till 2069 in the United Kingdom for the gender pay gap to disappear? Why, in 2015, did eleven per cent of women lose their jobs due to pregnancy? Why, globally, has one in three women experienced physical or sexual violence?

The journey of every country in the fight for women’s rights is specific to that country. And yet, so much is common in the experiences of women across space and time. Gender inequality and discrimination remain integral to our political and economic systems, to people’s identities, to cultures and religions – to power.

Today, as was the case a century ago, it is the unity around one particular issue that has captured the moment. The issue at this time, which has become definitional of the fourth wave of feminism, is workplace violence. This wave is mainly defined by the #MeToo Movement, which started in the US in October 2017, and has reverberated around the world – known differently, for example, as #WatashiMo in Japan and #BalanceTonPorc in France.

Importantly, the voices of individuals speaking out and challenging discriminatory social norms are now being taken up in the form of structural change, nationally and globally. After years of campaigning, the landmark International Labour Organization (ILO) Convention on Violence and Harassment at Work was adopted in June 2019.  Effort is now focused on ensuring its ratification.

Overall, the waves are first and foremost a description of the momentum created by individuals coming together to challenge the status quo – with increasing numbers becoming part of the force for change, and together changing the structures and policies of society. The result not only changes what people think and how they behave, but also spear-heads policy change.

The metaphor of waves to describe feminism was introduced retrospectively, and it has stuck, as a simple way of explaining how energy and priorities have shifted over time.

Social media, a tool of both oppression and liberation, has been a defining characteristic of the fourth wave. This current wave is acutely aware of – in fact, is defined by – an understanding not so much of the different political positions women might hold, but of the different layers of privilege and vulnerability that women experience.

The term intersectionality, coined by Kimberlé Cranshaw, puts this centre stage and demands an understanding of differences beyond gender – such as those of age, reproductive status, class, colour, sexuality and ability.

Women leaders have also brought their feminism to other causes − for example, in the current wave, Black Lives Matter, the global activist movement started by African Americans in the US, and the environmental movement by Sweden’s young Greta Thunberg.

There are also two calendar moments that are umbilically linked to the global women’s movement. The International Day of the Girl Child on 11 October is an annual reminder of the specific constraints facing girls, and the reality that their voices are the least likely to be heard in any policies or decisions – including those that most affect their own lives.

The other key dates on the global feminism calendar fall between 25 November and 10 December, known as the 16 days of Activism against Gender-based Violence. This period highlights both the problems remaining, and the ongoing activism against gender-based violence in the form of sexual abuse of all kinds. One way or another, feminist activism always circles back to gender-based violence – the flip side of women’s lack of political, social and economic power.

The vote, key to all change

Starting in the late nineteenth and early twentieth centuries, the first wave of feminism built on the demands of women centuries earlier − for a greater voice. It also built on campaigns in which women were pivotal, such as the anti-slavery movement. Many concerns were addressed, including rights to education and employment; double standards around sexuality; trafficking and violence against women; temperance (anti-alcohol campaigning); and women-led anti-colonial and anti-war protests. This foundational wave is, however, best known for campaigns around citizenship, the right to vote and to be voted into parliament. The vote was seen at the time as the key to all other changes.

That first fight was particularly bitter in the UK. Emmeline Pankhurst (1858-1928), the leader of the suffragette movement and my great-grandmother, was at the forefront of that fight – which started in Manchester in 1903. She was, and has remained, an iconic global representation of women’s resistance, as a consequence.

The movement resulted in hundreds of thousands of people, mainly women, marching, but also to the destruction of property, to thousands being imprisoned, to being force-fed, to dying for the cause. As the leader of the movement, Emmeline’s courage, her determination, her vision of gender equality has continued to inspire.  She was, and remains, a controversial character, even among supporters of her objectives.

Emmeline’s three daughters were all involved in the movement her second daughter, Sylvia (1882-1960), was my grandmother. Sylvia increasingly disagreed with her mother’s leadership of the movement – opposing her authoritarian decision-making, with the focus on wealthier women, and with the militancy. She also believed that campaigning for the vote needed to be done together with strategies through which working women could address their daily struggles.

Furthermore, Sylvia argued for the importance of universal suffrage – at a time when many working-class men didn’t have the vote either − and was an outspoken pacifist when it came to the Second World War. Following the invasion of Ethiopia by Mussolini, this became another cause that she took on. She moved to Ethiopia, where she was buried with a state funeral.

The splits in our family are a reflection of how very personal the political can be, and of the schisms throughout the history of women’s rights.

Feminism’s second wave, from the 1960s, spotlighted economic rights such as equal pay and the challenge to gendered hierarchies of work, which had resulted in women being driven into poorly-paid jobs. Sexual freedom and individual choice characterized the third wave, from the 1990s – thirty years later. The period also saw greater government and intra-governmental commitments to address gender issues. The United Nations World Conferences on Women took place in this time frame.

The Pankhursts were extraordinary women in their day, but how have they influenced me, a woman in the twenty-first century? Without a doubt, I am moulded by having had to think about the differences of opinion within my family, and also by the fact that I was brought up in Ethiopia. In 1992, I wrote a book on women in Ethiopia, based on my thesis, called Gender, Development and Identity.

Last year, I turned to women’s experiences in the UK with the book Deeds Not Words: The Story of Women’s Rights, Then and Now. It considers how far we have come over the last hundred years, and has facilitated innumerable discussions with audiences here and abroad.

If feminism is in my blood, so too is an understanding of the power of solidarity and purpose created by marches. The celebration of global feminism around International Women’s Day and the March4Women events – in London, in particular – have long been highlights of my year.

On 8 March this year (2020), I will be marching as so many have done, and will continue to do so right around the world – banners held up high. We still have a long way to go.

Photos: Changing the Future for Women in Greater Manchester and Karl Mancini photographer

A human rights activist and author, Helen Pankhurst is an advisor for CARE International, professor at Manchester Metropolitan University, and chancellor at the University of Suffolk. She divides her time between Ethiopia and the United Kingdom.