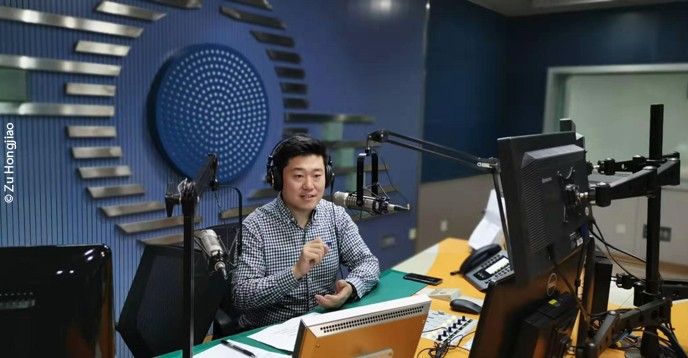 Having worked as a professional host for the radio and television station of Jilin province, one traditional Chinese broadcaster experienced an interesting transformation into a new media host. Since 2014, Shi Zhan has been practising a new form of audio storytelling – vividly recreating the history of China’s ancient dynasties on Shanghai-based Himalaya FM, the country’s most successful audio network.

It was by pure chance that I enrolled in a training course that Himalaya, the online audio platform, was offering to media professionals, amateur voice lovers and people from all walks of life. It was from this course that I learnt how to use cutting-edge ideas and techniques in new media broadcasting. By using creative narration and sharing knowledge based on a respect for historical facts and audience preferences, I am now one of the most popular hosts on the platform.

With my new media thinking and humorous interpretation of Chinese history, I have attracted over 800,000 fans – ten times the number of fans I had in traditional media. Audio content has gained popularity in China over recent years. Unlike in most Western countries, where public or private advertising funds radio platforms, Chinese networks are gradually convincing audiences – especially the younger generation – to pay for audio content and knowledge.

This monetizing of audio programmes – where listeners think it is worthwhile to chip in, often in very small amounts, to listen to their favourite shows – has allowed radio hosts to increase their incomes, depending on their popularity. I recently spent $150,000 of my income from Himalaya to build my own studio.

A pioneer in live-streaming broadcasts, audiobooks and podcasts, Himalaya FM – with offices in China, Japan and the United States, and plans to expand further –  has over 600 million users (as of October 2019, according to a company release). The network’s unique expertise has enabled amateur and professional producers to create content for a potentially broad and burgeoning audience.

Professional lawyers, doctors and other experts can share their knowledge with the general public through audio. Their efforts are supported by Himalaya, whose stated mission is to “share human wisdom through audio”. The online audio platform provides a large market for paid copyright content, and a wide distribution channel. Anyone can benefit from the company’s business model. One striking example of this is of broadcast host Deshu from Shenyang, who led a group of disabled people to read and record audiobooks, earning them a good wage.

In a fast-growing and intensely competitive Chinese online audio market, the new radio practices followed by the Asian audio giant have enabled traditional  radio producers to achieve a successful transformation into new media hosts.  My training and years of experience with Himalaya have taught me to create original content while adhering to three fundamental new media practices – which have transformed my way of thinking and have proved game-changing.

The first new media practice involves paying more attention to the completion rate than merely looking at the click-through rate of listeners. The completion rate signifies the probability that the audience will listen to the programme till the end. Himalaya’s users spent an average of 170 minutes listening to its shows (as of October 2019), but the back-end data reflected that after just a few minutes of listening, half of my listeners left. This really surprised and frustrated me.

To solve this problem, I spent half a year cultivating the internet’s “user thinking” model, forcing myself to develop “a sharp mind while covering the latest events and discovering the latest news”. Doing your homework and being up-to-date is very important in this business. Before recording each programme, I study the news and current affairs for two hours and spend eight hours writing an original script – before finally distilling it to a programme of only eight minutes. This “grinding” of my own work has doubled my audience, and allowed me to rapidly increase the completion rate.

The second new media practice involves improving the user experience, which is of paramount importance. To achieve this, I developed my own method. This involved  moving away from the “loud” background music of traditional radio, and using music as a tool to enhance the atmosphere – so the audience would pay more attention to the content itself.

“Selection” and “creation” are the keywords of the third new media practice. As a new media host, I dare to choose material that is not accessible to the audience anywhere else. This original content is created with my own interpretation – making it both interesting and informative for my listeners.

My current projects for Himalaya include working on an audio guide on the terracotta warriors of  the Mausoleum of the First Qin Emperor. Tourists only need to scan the QR code to listen to my narration.