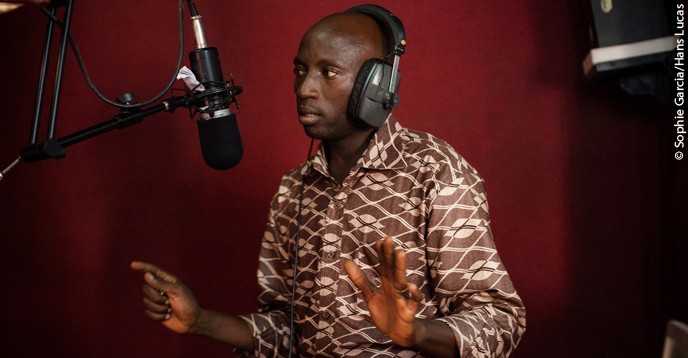 A journalist broadcasting on Radio Omega, one of the many stations in Burkina Faso.

When it comes to listening to the radio, Burkina Faso is one of the champions of sub-Saharan Africa. The proliferation of stations and the popularity of programmes that give listeners a voice, reflect the enthusiasm of the Burkinabe people for this medium.

Radio Pulsar, in Sanyiri, a populous district east of Ouagadougou, broadcasts its programmes – news, sports, music, entertainment – over an area with a radius of forty-five kilometres. This independent radio station has modest premises on the first floor of a three-storey building  – just two rooms for production and broadcasting.

From Monday to Friday, at 7.15 a.m., journalist Hermann Naze goes on air. He is the host of Faut qu’on en parle! (We have to talk about this), a live programme which invites guests to the studio to discuss a wide range of subjects. Elections, terrorism, current affairs, the alcohol consumption of youth – no topic is out of bounds. “Every morning, we give the public a chance to have their say,” he explains. Listeners are encouraged to phone in and react on air  to what they hear.

Offering listeners a live forum is also the mission of Affairage, an early-morning programme broadcast by Ouaga FM, another private radio station in the capital. “It’s a form of reality radio,” explains Paul Miki-Rouamaba, Ouaga FM’s editor. “We’re interested in all the topics that are currently being debated.”

Listeners can call in on the air to discuss real-life experiences, or to report problems. But they can also question their leaders, and get immediate answers. “Depending on the issues raised on air, we contact people who can answer listeners’ questions,” the editor adds.

Sayouba Sanfo, a shopkeeper and launderer in Ouagadougou, listens to six or seven radio stations every day. Like many other residents in the capital, he sometimes participates in interactive programmes “to change things.”

“One day,” he explains, “I criticized the way in which a health centre was being run. I had noticed that the nurses were taking supplies home, and that the place was very dirty. When I mentioned that on the radio, something was done about it.”

The widespread use of mobile phones over the past decade has brought radio and listeners even closer. Twenty years ago, only those with a land-line could take part in interactive live broadcasts. Now everyone can react on air, by calling or texting.

The success of these participatory programmes shows the vitality of the radio scene in Burkina Faso. The country has at least 154 active radio stations – forty-seven of which are community stations, thirty-nine religious, thirty-eight commercial, and seven, state-owned. According to an AfricaScope survey published by Kantar, an international market research company, in September 2019, Burkinabe listeners are the most committed out of the eight sub-Saharan African countries included in the survey (Burkina Faso, Cameroon, Congo, Côte d'Ivoire, Democratic Republic of the Congo, Gabon, Mali and Senegal).

About sixty-two per cent of residents of these countries, aged 15 and over, listened to the radio every day in 2019 – for an average of one hour and twenty minutes daily. With an average listening time of three hours and eight minutes, Burkina Faso is well ahead of its neighbours.

The Burkinabe people’s enthusiasm for this medium is not new. It has its roots in experiments with rural radio in the 1970s. In a country where only forty-one per cent of 15-year-olds can read and write (UNESCO Institute for Statistics, 2018), radio has made it possible to reach populations – often with low levels of literacy – living in remote areas, far from towns and cities.

“Rural radio was introduced in 1969. We needed a medium that we could use to teach farmers about new agricultural methods,” explains Seydou Drame, a specialist in information and communication law who teaches at the Aube Nouvelle University and the Institut des Sciences et Techniques de l’Information et de la Communication (ISTIC), both in Ouagadougou.

This is how the country’s “radio clubs” – groups of radio listeners – were born. People living in rural areas would gather around a radio set to listen to the broadcasts. When the programmes ended, there was always a discussion. “Rural people immediately recognized themselves in this new means of communication – which spoke about their problems, in languages that they could understand,” explains Mathieu Bonkoungou, who has worked at Burkina Faso’s national radio station for several years.

While French remains the official language, in reality it is only understood by about twenty per cent of the population. Radio is therefore a way to build bridges between the different languages spoken in the country, and also between different media. News and current events reported in the print media are broadcast on radio – reaching those with little interest or access to the written word, in languages that they understand.

The flagship programme of Savane FM, one of the country’s most listened-to radio stations, is the Sonré press round-up. It is presented by Aboubacar Zida (known as Sidnaba) in Mooré, one of the national languages. Journalists divide up the newspapers and decide which articles to summarize and read on air. “Even those with a good level of education listen to the press round-up on the radio,” says Soumaïlla Rabo, the editor-in-chief. “It also helps them to improve their knowledge of the Mooré language.”

The success of radio in Burkina Faso might explain why the Burkinabe are less interested in television. While people in countries in the AfricaScope survey spend nearly four hours a day on average in front of the TV, Burkinabe people only spend three hours a day watching it.