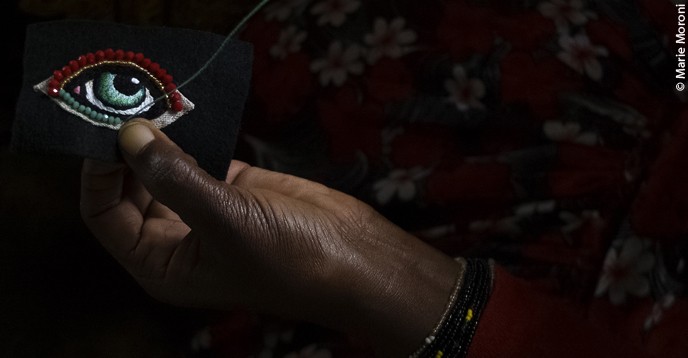 Celestial Eye, a brooch from the Ibaba series by French designer Céleste Mogador, created in the Ibaba Rwanda embroidery workshop in rural Rwanda, where women have finally returned to work after an interruption of nineteen years.

A quarter of a century after the terrible genocide of 1994, Rwanda is turning a new page in its history. Following a long period of national unification and reconciliation, it is investing in economic growth and focusing on new technologies, with the hope of becoming an ICT hub in Africa.

Twenty-five years ago, the bloodiest chapter in the contemporary history of Africa was written in Rwanda. In a hundred days, a million people lost their lives, leaving behind a million orphans, not counting the widows and widowers.

I was in Uganda when this drama was being played out in my country. The neighbour to the north had welcomed me as a refugee in 1962, when I was a young man of 17. I studied there, at Makerere University, started my family and lived there until 2008. But since 1994, I have divided my time between Uganda and Rwanda, to take care of my family's orphans and also to contribute to the reconstruction of my homeland.

Everything had to be redone in this wounded country. The first concern of the Rwandan Patriotic Front, RPF-Inkotanyi, the political party led at the time by the current Rwandan President Paul Kagame, was to stop the genocide and restore peace and security. “We have learned lessons that should inform us how to build our future,” he recently told a gathering of business leaders in Charlotte, North Carolina, in the United States.

To build the future, we began by relearning to conjugate the verb “to be” in the plural and to tell ourselves that we are all Banyarwanda. Forget who is Tutsi, who is Hutu, who is Twa. Overcome hatred.

Tradition to the rescue

Priority was given to unity and reconciliation. To this end, the gacaca, the traditional system of justice, was revived, allowing the community to try the perpetrators and accept their request for forgiveness. Through these traditional courts, survivors were able to learn more about the deaths of their relatives, but also about the criminals who confessed their actions and admitted their guilt. Different sentences were handed down, depending on the seriousness of the crimes committed. Some were sentenced to community service, others to prison terms. In ten years, the gacaca courts judged 1.9 million cases, before they were officially closed in May 2012.

At the same time, public judicial institutions were rehabilitated in order to judge the most serious cases. Internationally, the International Criminal Tribunal for Rwanda (ICTR), established on 8 November 1994, recognized that “genocide, crimes against humanity and war crimes were perpetrated on a horrific scale”, reaching “a rate of killing four times greater than at the height of the Nazi Holocaust”. To date, the ICTR has indicted ninety-three individuals, considered to be planners and perpetrators of the genocide. Eighty of them have been tried, out of which twenty-three have served their sentences.

In the aftermath of the genocide, another traditional method was used to enable citizens to participate in public affairs. It consists of a commitment to planned activities in a management system that provides for contracts called imihigo. In the past they were oral and endorsed by a ceremony, today they are written and signed, but their function remains the same: they engage the individual to carry out a number of tasks during a year, at the end of which their performance is evaluated by the community.

This method has contributed significantly to the improvement of public services in present-day Rwanda, which has opted for consensual democracy and power-sharing.

With an average growth rate of more than seven per cent per year since 2000, Rwanda is now one of the leading African countries in economic growth. According to official figures, its investments in agriculture, energy, infrastructure, mining and tourism have lifted more than one million people out of poverty.

This development is accompanied by the country’s increased integration into regional economic structures, but also by its greater participation in the international community. With 6,550 personnel, Rwanda is now the fourth-largest contributor to United Nations peacekeeping operations.

But the country wants to invest first and foremost in people to achieve all-inclusive development. That is why it places women at the forefront of public life. They paid a high price during the black spring in Rwanda: between 100,000 and 250,000 women were victims of rape and sexual assault, these appalling weapons of war, recognized by the ICTR as acts of genocide. Since then, many of them have died of AIDS contracted during the attacks.

In order to ensure women’s protection, a Law on the Prevention and Punishment of Gender-based Violence was adopted in 2008. Other laws ensure their full participation in political and social life: at least thirty per cent of positions are reserved for women in all state bodies at all levels. This strategy has bridged the gap between men and women at a faster rate. Today, sixty-two per cent of parliamentarians, fifty per cent of ministers and forty-four per cent  of officials in the judiciary are women.

Education and health are two other priority sectors, which have absorbed thirty per cent of the annual national budget for several years. The rate of school attendance in the twelve years of compulsory education is ninety per cent and health insurance coverage is eighty-seven per cent.

Health services have improved considerably in remote areas since the arrival of Zipline drones, which, according to the chief executive officer of the American startup, made more than 4,000 deliveries of blood and medicine between October 2016 and April 2018.

Education, too, is slowly but surely changing as a result of  new information and communication technologies (ICTs), particularly since the launch of the “One laptop per child” initiative in June 2008. Over 600,000 laptops have been distributed and pupils have adopted to share their usage on a daily basis. The project, however, has faced challenges, notably lack of electricity coverage in rural areas for charging the laptops and a lack of resources to distribute them to over 2.3 million schoolchildren. Nevertheless, ICTs are developing at full speed: 4,000 kilometres of fibre-optic cables have already been rolled out in the country, which has a surface area just exceeding 26,000 square kilometres. This year it is expected that wireless Internet and fibre-optic will cover ninety-five per cent of the country.

The vast majority of the population already has access to mobile phones and out of roughly 13 million inhabitants, more than 4 million can now shop and pay their bills, taxes, and even police fines, using mobile applications. The same applies to administrative procedures. Simply go to the portal Irembo (the word means access in Kinyarwanda) to find most government services online.

Looking to the future

Rwanda is focusing on technology development to ensure a better future. Banking transactions are facilitated through mobile services. Business leaders have access to e-commerce through the Electronic World Trade Platform (eWRP), launched in October 2018 by China's e-commerce giant Alibaba. Urban transport is facilitated by car and motorcycle services controlled via mobile applications.

Among the latter, SafeMotos, nicknamed “the Uber of motorcycle taxis” was born at kLab, a technology innovation hub considered to be the most dynamic in the country. Since 2012, it has trained thousands of young people free of charge, helping to launch sixty companies, four of which have become leaders in their field of activity and two of which have expanded internationally. It is one of a number of innovation centres that have developed, particularly in Kigali, the capital, with a view to offering young Rwandans new professional opportunities.

The City of Innovation to be built as part of Africa50, the infrastructure development platform of the African Development Bank (AfDB), also promises a bright technological future for Rwanda, which is now well positioned to become a regional ICT platform. Especially since in September 2018, artificial intelligence (AI) officially entered the university curriculum, thanks to a master's degree launched by the Senegalese expert Moustapha Cissé, head of Google's AI research centre in Ghana, and by the African Institute of Mathematical Sciences (AIMS) in Kigali.

A quarter of a century after the genocide against the Tutsi in Rwanda, the divided, devastated, dilapidated nation, in need of reconstruction and rehabilitation, is today resolutely looking to the future and preparing the ground for what may one day be called the Rwandan miracle.

See our 7-day in Kigali videos, from a documentary by Mehdi Ba and Jeremy Frey, 2014.

With this article, the Courier participates in the International Day of Reflection on the 1994 Genocide against the Tutsi in Rwanda on 7 April.