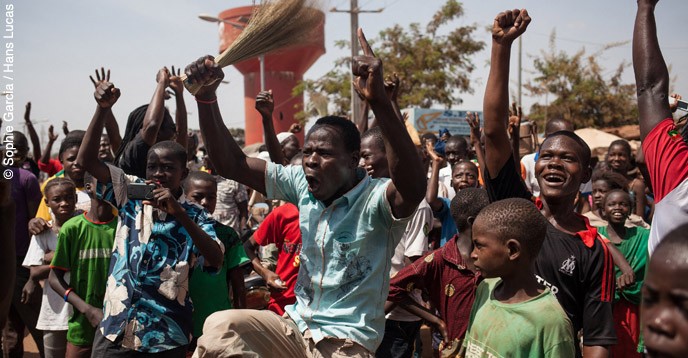 Crowds cheering the caravan of Balai Citoyen, during the demonstration against the constitutional revision project in Ouagadougou, Burkina Faso, October 2014.

Many young people in Africa are taking a stand against the current politics in their countries. As civil-society campaigners who are active on social media networks, they are challenging the established authorities – using rap and graffiti, and bringing traditional cultural codes up to date. Supporters of direct democracy, they are preparing the way for a society that is less hierarchical and ‘decolonized’, at last.

The African political classes have failed in their mission to build nations characterized by justice and progress, in spite of a number of significant and very welcome advances. Adding  the non-existence of credible alternatives among the opposition parties, we are forced to admit that politics in general have reached a low point. This impasse is leading large numbers of  young people en masse to adopt a stance of defiance – which could be summed up by the phrase: “they’re all the same”.

Young people are getting politically involved in new ways – creating startups, using digital forms of activism and forming citizens’ groups. Yet none of these initiatives can replace politics, which is the only way to change the course of a country’s history, to halt the perpetuation of inequalities, and to restore a sense of dignity to millions of people. Much needs to be done urgently in Africa, but, above all, there is a need to foster the emergence of a new kind of dialogue among youth – using with other methods and other players if necessary, and with the ultimate aim of seizing power democratically.

One alternative is gradually taking shape and deserves careful attention. New political youth movements are appearing, springing up from urban cultures and suburban neighbourhoods. Examples include Y’en a Marre (“We’ve had enough”), a group of rappers in Senegal, Le Balai Citoyen (the People’s broom), in Burkina Faso and Filimbi and LUCHA (Lutte pour le Changement, or Struggle for Change) in the Democratic Republic of  the Congo (DRC).

These civil society movements are a breath of fresh air compared to the drab and essentially interchangeable political classes. The message of these new elites breaks with classical political-speak – it is raw, direct and delivered in a language that can be understood by those to whom it is addressed, which explains its success. So, when Y’en a Marre campaigned to get people to register to vote in 2011, the turnout at the elections was unprecedented. It was the same for the symbolic street-cleaning operation in Ouagadougou, after the popular uprising of October 2014 against a proposed amendment to the Constitution, which would have allowed Burkina Faso’s former president,  Blaise Compaoré, who had been in power since 1987, to stand again in the presidential elections.

These new African icons are disconcerting – as much because of what they say and the way they say it, as by the way they dress, which breaks with the traditional suit-and-tie of  politicians. The decolonial dimension of their projects represent a real challenge to the political classes and even the general public, largely because of their horizontal (rather than hierarchical) reach, combining real political action with a social stance. These youth movements are deeply political, even if they unconsciously or tactically hide behind a ‘social’ label. They also  show no desire to participate directly in elections.

These movements are all attempts to decolonize politics. They aim to return politics to the people – into the hands of citizens who have hitherto been excluded from the democratic process and consulted only to add their stamp of approval by voting. Interestingly, the way these groups are organized is a form of direct democracy. Through a network of local branches, Le Balai Citoyen enables people across the nation to take part in decision-making. With a slightly more limited horizontal dimension – because of the notoriety and massive popularity of its leaders – Y’en a Marre also allows everyone to join in the process of consultation. This kind of transversal connection does not exist in conventional politics. The combination of methods arising from contemporary citizens’ groups and traditional African negotiation strategies, offers a model for how a political organizational structure in Africa might work.

These groups have proven their effectiveness. In Senegal, during the mobilization of 23 June 2011, and in spite of  police repression and surveillance by intelligence agencies, Y’en a Marre triggered a massive movement. This helped to torpedo amendments to the Constitution by parliament that would have allowed the re-election of Abdoulaye Wade – and probably  ensuring that his son took over when he stood down.

Art at the service of politics

By using music, dance, graffiti and references borrowed from street poetry, these movements are succeeding in bringing together young people who understand the language and codes of their neighbourhoods. On the streets and via the internet, they are calling for an alternative dialogue and for projects that give wings to their dreams. These new players in African politics are employing a range of cultural references to support their actions. Rap music, for instance, has been a  powerful vector for getting the message of opposition across. Other statements include using national languages (Wolof by Y’en a Marre and Moré by Le Balai Citoyen) or wearing an Amílcar Cabral hat (named after the emblematic leader of the struggle against the Portuguese colonization of Guinea-Bissau).

As beacons of hope, the responsibility of these movements is great. They represent political forces that are uninhibited, free, and unencumbered by colonial burdens. It is thanks to them that the continent no longer conjures up only images of pity, generated by poverty, famine, AIDS and war. We are on the threshold of a radically emancipating project. Much like the anti-austerity Indignados movement in Spain, which gave rise to the far-left Podemos political party in 2014, these groups will sooner or later be called upon to stand in general elections. We could then witness a decolonial turning point vis-à-vis Western countries – with the possibility of  societies founded on our own social and cultural realities.

With this article, the Courier marks the celebration of  UNESCO’s Africa Week in the month of May.

Graduate of France’s École Nationale d’Administration (ENA) and Sorbonne University, Hamidou Anne (Senegal) has held several positions in Senegalese government organizations and contributed articles to the international media. He is currently working on a doctorate in political science at the Gaston Berger University, Saint-Louis (Senegal).