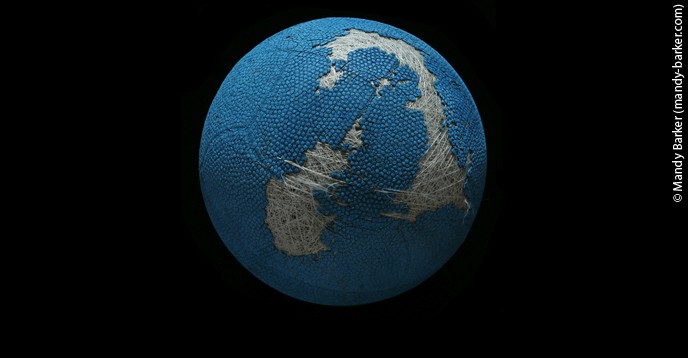 As you begin reading this April-June 2018 issue of the Courier, you are living in the Phanerozoic eon, the Cainozoic era, the Quaternary period and the Holocene epoch. These are all subdivisions of our planet’s geological timescale, to which a new bar will probably soon be added – the Anthropocene.

The Earth entered the Holocene (from the Greek “entirely” and “recent”) more than 10,000 years ago. But human activities have had such a significant and generalized impact on the planetary system that, for the past few decades, scientists have been wondering whether we should be speaking of a new epoch. To describe this new epoch, the American biologist Eugene F. Stoermer initially coined the term Anthropocene (from the Greek “human being” and “recent”), popularized in the early 2000s by the Dutch atmospheric scientist and Nobel laureate in chemistry, Paul Crutzen. Since then, it has stirred up endless debates in the scientific community and caused a great deal of angst among those  who have heard about it.

It is now up to the international community of palaeontologists, geologists and stratigraphists – in particular,  the International Commission on Stratigraphy and the International Union of Geological Sciences (IUGS) – to determine whether there is indeed a new geological epoch or whether the Anthropocene will go down in future encyclopaedias as a philosophical construct aimed at alerting humans living in the twentieth and twenty-first centuries of the threats their activities posed to the planet.

While awaiting this verdict, the scientists continue to argue, plead and quarrel. How should we date the beginning of this hypothetical new epoch? In other words, how long have we supposedly been responsible for a process that could prove fatal for our planet? For some, the Anthropocene is just another name for the epoch that we call the Holocene. After all, humans began to exert pressure on the environment over 10,000 years ago – since their sedentarization and the invention of agriculture. For others, the Anthropocene started with the industrial revolution, in the eighteenth century. Still others view the beginning of the Anthropocene as coinciding with the release of the first atomic bomb in 1945.

In spite of these disagreements, all but a very few acknowledge that in the last half-century, the state of the planet has deteriorated more rapidly and more dramatically than ever before. There are gigantic amounts of  plastic on beaches and in the seas; an unprecedented development of new substances that are covering the Earth’s surface and which are rarely recycled; soils that are overflowing with fertilizers; increasing acidity of the oceans; unprecedented levels of pollution; the erosion of tropical forests; the disruption of ecosystems; the massive extinction of species and a drastic loss of biodiversity, and global  warming at an alarming rate – the list goes on.

Who is to blame for all this? “Humans!” is the resounding reply of most scientists.  It remains to be determined whether we – the world’s rich and poor – should all bear the same burden of responsibility. There are some who blame, above all, the capitalist system created by the West, and speak of the Capitalocene or Occidentalocene. Are we all heading for a catastrophe? The voices of doom are prophesying the end of the world! Concepts like  Chthulucene and Thanatocene are being put forward to warn us that there is a monster on the loose, that death is stalking us. Some more moderate experts are just as concerned about the indecision, and therefore, inaction, of our decision-makers. “It seems as though humanity is being lethargic – waiting for the end of the film, when the heroes arrive to sort everything out, and we can all live happily ever after,” as one of the articles in this issue concludes.

Meanwhile, the debate rages on, the solutions are slow to come. The Courier takes stock of the situation.