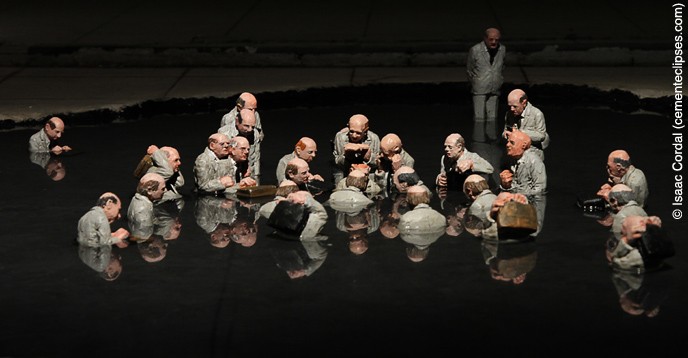 Follow the Leaders, an installation by Spanish artist Isaac Cordal at the Exposition Fragil (Brussels, 2015). The small sculptures represent businessmen half-drowning in a mixture of water and oil.

Climate change is not the creation of the mere existence of billions of humans who inhabit the planet, but is wrought by the few who control the means of production and make the central decisions about energy use, argues Andreas Malm. In what is more Capitalocene than Anthropocene, a head-on confrontation with fossil capital is imperative if we are to prevent extreme climate events like the hurricanes that have devastated Dominica.

Dominica used to be an emerald hill-range, rising straight out of the Caribbean Sea. When I visited the island nation in August 2017, it remained covered by impossibly green woods, every peak and ravine bursting with vegetation. The most mountainous island in the region, with the greatest intact forest cover, it was a marvel of natural splendour, but poor. Most of the 70,000 inhabitants – the vast majority, African descendants – subsisted on small-scale farming. The banana, plantain and yam were supplemented with some fishing and a little bit of tourism.

The island had already suffered an early blow. In 2015, Tropical Storm Erika poured out torrents of water over the hills, until some of them gave way and collapsed. At the time of my visit, the country was still licking its wounds from that disaster, clearly visible in the south-east, where the slopes were cut up by the landslides that had carried away top-soil and trees and houses. Roads were being rebuilt and new settlements constructed to house the survivors.

Six weeks after I left, on 18 September 2017, Hurricane Maria suddenly accelerated to a Category 5 system – one of the most explosive intensifications of a hurricane on record – and slammed straight into Dominica. Over one night, the green island turned brown. The extraordinarily ferocious winds simply blew away the forest cover.

Leaves and branches were scattered over the sea, naked trunks left standing in what looked like clear-felled areas – if Erika had scratched the island, Maria flayed it. This time the entire infrastructure – houses, roads, bridges, hospitals, schools – was pulverized and the agricultural sector obliterated. The financial cost was estimated at twice the country’s Gross Domestic Product (GDP), but, as the IRIN news agency reported, “the deeper sense of loss is off the spectrum”.

In the first month after Maria, a fifth of the population picked up what few possessions could be salvaged, and left. Those who stayed spoke of themselves as soldiers on a battlefield: martial discourse swept the country. Five days after the hurricane, Prime Minister Roosevelt Skerrit, himself now homeless, addressed the United Nations General Assembly: “I come to you straight from the frontline of the war (…). As Dominicans bear the brunt of climate change, we are shouldering the consequences of the actions of others, actions that endanger our very existence, and all for the enrichment of a few elsewhere.”

The descendants of the slaves that inhabit Dominica had done nothing to heat up this planet, and neither had the tiny surviving indigenous population. Subsistence farmers who resorted to taxi-driving or street-vending to supplement their incomes, they had negligible carbon footprints and zero power over global energy supplies. Yet, in the assault from the hyper-hurricane, the main victims were precisely these farmers: they were killed, their lives laid to waste, the very land they stood on destroyed.

Are we all responsible?

In the discourse about climate change, as it has developed in Western academia, media and policy-making circles over the past decade or so, another storyline has taken hold. It says that the problem has been created by all of us. Global warming is the fault of the human species as a whole. We live in the Anthropocene, the epoch when our particular species has overtaken the natural forces in determining the trajectory of this planet, most obviously in the realm of climate – and so humans in general are responsible for the ensuing catastrophes.

An explicit statement of this logic can be found in one of the most celebrated books on the topic in recent years – Indian author Amitav Ghosh’s The Great Derangement: Climate Change and the Unthinkable (2017), where we learn that global warming “is the unintended consequence of the very existence of human beings as a species.” More than that, it is “the product of the totality of human actions over time. Every human being who has ever lived has played a part in making us the dominant species on this planet, and in this sense every human being, past and present, has contributed to the present cycle of climate change.” On this view, the average coffee-grower on Dominica contributed to Maria merely by dint of belonging to the Homo sapiens species. So did her ancestor slaves who were brought to the island. So did the Kalinago people, living there in peace before Europeans made landfall on the island in 1492. 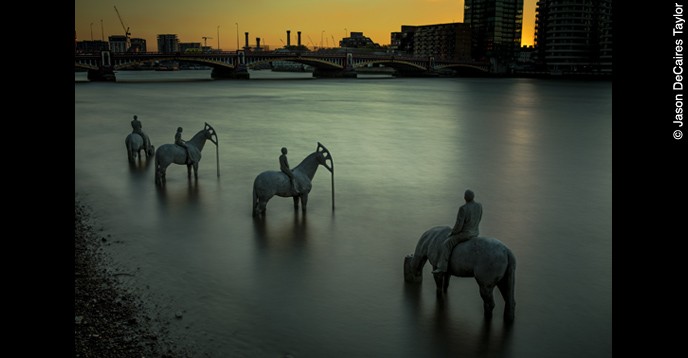 The Rising Tide, an installation of sculptures by British artist, Jason DeCaires Taylor, on the River Thames, London, 2015.

It is exceedingly difficult to see what scientific grounds there could be for such a view, but a multitude of intellectuals expounding on the Anthropocene have made similar statements. To pick just one other case, historian Dipesh Chakrabarty, perhaps the most influential interpreter of the concept in the humanities and social sciences, has argued that when it comes to producing climate change, “the poor participate in that shared history of human evolution just as much as the rich do.” (Chakrabarty D, 2014, Climate and Capital: On Conjoined Histories, Critical Inquiry 41, no. 1, The University of Chicago Press Journals.)

On this view, Maria was more a suicide than a blitzkrieg. It was a case of the chickens coming home to roost among some of their original breeders, with no particularly flagrant injustice involved. From the denuded hillsides of Dominica, the reality, of course, looks very different. The Anthropocene narrative is flawed because it distorts and obfuscates that reality – not by saying that human actions have caused climate change, which is an incontrovertible fact, but by sliding from that observation into the depiction of the human species as a unified protagonist. It is anything but.

For the past few thousands of years, as long as class societies have existed, Homo sapiens has been a deeply fractured entity, and never more so than in this rapidly warming world – where the world’s eight richest men own as much wealth ($426 billion) as the poorest half of the world’s population combined ($409 billion), according to Oxfam, the charity (January 2017). Wealth is known to correlate closely with carbon dioxide emissions. It is the sign of profits from business-as-usual and the best proof against its consequences. Soaked in fossil fuels, it is the engine of the storm.

We are being told that climate change is created by an anonymous mass of millions and billions of humans, when, as American geographer Matt Huber has recently argued, it is in reality, a very narrow segment of the species that controls the means of production and makes the central decisions about energy use. That segment operates with one goal in sight – expanding its riches further. The process is known as capital accumulation, and it grinds on relentlessly, with no regard for the fate of Dominicans or the ever more desperate alarms from climate science.

To take but one example, in December 2017, The Guardian newspaper reported that the production of plastics in the United States is set to increase by forty per cent in the next decade – since ExxonMobil, Shell and other fossil fuel corporations have used the ongoing shale gas boom to invest massively in new plastic plants. They will lock the American – and by extension, the global – economy, even deeper into its addiction to plastic products. These will eventually make their way to beaches around the world, and to fossil fuels, the heat from which will find new islands to devastate. From the standpoint of capital, that is exactly the right thing to do: invest in the production and consumption of fossil fuels to generate profit. It is this process that has fuelled global warming from the very start.

The people of Dominica and their many fellows of misfortune around the world – set to multiply every coming year unless a head-on confrontation with fossil capital begins right about now – have never lived in what is termed the Anthropocene and their actions cannot be blamed for causing harm to the planet. They suffer the blows from an age more appropriately labelled the Capitalocene. It is a form of structural, systematic war, but we can expect the sudden shock-and-awe events to become more frequent in the years ahead. A more open question is when, or if, the fight-back will ever begin. Blaming the human species won’t make it happen.

The author of several books, including, most recently, The Progress of This Storm: Nature and Society in a Warming World (2018), Andreas Malm teaches human ecology at Lund University, Sweden.