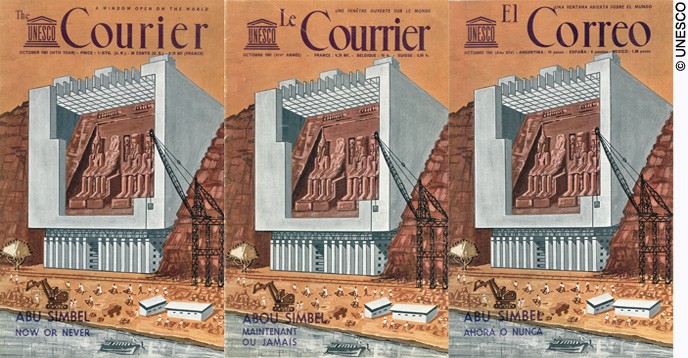 In the 1960s, a teenager dreamed of escaping the cramped confines of his home in a poor neighbourhood in Montevideo, where he lived with his parents, who were barely literate. He wanted to go far, and went on to pursue a brilliant career in pure and applied mathematics in Brazil. He was eventually elected rector of the University of the Republic in Uruguay, in 2014. But before that, Roberto Markarian attended another kind of school – that of free thought – which he discovered within the pages of the UNESCO Courier.

I came from very modest beginnings − my grandparents were illiterate and my parents barely knew how to read and write. My knowledge came from my studies in the public-school system of my country, Uruguay, and from my reading. Between the ages of 12 and 17, I regularly read the UNESCO Courier and that is how I absorbed culture. I can still see the images on the magazine’s covers, and so many questions that shook the world − of science, culture, and education during the past century − come back to mind. Many of these issues still make headlines and remain relevant − the challenges posed by illiteracy, access to water, preserving the world’s historical heritage, etc.

Since it was launched in 1948, the journal rapidly gained enormous prestige because of its open-mindedness – which made it a reference source for hot topics and controversial issues. I knew that I would find a variety of opinions in its pages, and a vision that was not apolitical − that is not the point – but objective; an analysis of the subjects that was both balanced and thorough at the same time.

I still have a particularly vivid memory of the issues dedicated to the Nubia campaign. I was a high-school student back then, and knew nothing about the Abu Simbel temple. In the Courier issue of February 1960, Save the Treasures of Nubia, I learnt that the construction of the Aswan Dam across the Nile in Egypt would flood 3,000-year-old monuments. This was at the end of the 1950s, and UNESCO mobilized the whole world to save them. The Organization garnered tremendous international support to undertake the monumental effort of entirely dismantling the majestic Abu Simbel temple and rebuilding it at another location, several metres higher − so that twice a year, the rays of the sun would penetrate the temple’s inner sanctuary, just as they did at its original location.

Back cover of the Courier of February 1967.

Impressed by the four colossi of Rameses II, I read, in an issue entitled Abu Simbel, Now or Never the Courier, October 1961), this detailed explanation by Peter Ritchie-Calder, the famous British scientific writer: “A narrow passage leads to the inner sanctuary where are seated the statues of the three gods to whom the temple is dedicated, and Rameses himself. And here is seen the purposeful ingenuity of the architects and engineers. Like skilful stage-lighters, they contrived that the rising sun would penetrate 200 feet into the heart of the mountain, to illumine the faces of only three of the immortals. The fourth, the god of the Underworld, Ptah, on the extreme left remained eternally in darkness. This essential feature of Abu Simbel was one of the things taken into account in deciding how the temple should be finally preserved from the rising waters of the High Dam.”

Year after year, the Courier reported on every step of this unprecedented international undertaking − The Nubian Campaign is Launched (May 1960), “An Account of Excavation in Nubia during 1961-1962” (November 1962), Victory in Nubia (December 1964), “Dismantling Abu Simbel” (November 1965), “Rameses finds a New Home” (February 1967), The Greatest Archaeological Rescue Operation of all Time (February-March 1980) − thus echoing one of the greatest victories of international solidarity, as the title of an article in  the August-September 1971 issue suggests.

At the time, the Courier’s collaborators included Albert Einstein, Claude Lévi-Strauss, Jorge Amado, Bertrand Russell, Robert Capa – I discovered who they were, what they did and what they thought, by reading the journal. They enabled me, as the watchword of the UNESCO Courier professed back then, to look through “an open window onto the world”.

When, in the mid-1960s, I started university life to study engineering and mathematics, I dedicated much of my time to union activities and the university’s management, and stopped regularly reading the Courier. But fortunately, in spite of the vagaries of my country’s history, I managed to save nearly all the issues I had − bound together with a system of metal wires that would seem slightly outdated today.

As for the Courier, it continued its existence until 2001, when its monthly publication stopped. A lack of financing and support forced it to close down in 2011. We thought that was the end of it.

A call to humankind

But five years later, the magazine reappeared. The first issue of the revived Courier was published in April 2017, with the motto: “Several Voices, One World”. Now a quarterly, it continues to enrich the collection. You can access the entire collection, from 1948 to the present, in the digital archives. Most of the archives are available in English, Spanish and French, but issues from the last few years can be found in many more languages on the journal’s website. It is worth the detour. I recommend it. Reading the Courier, you will discover a serious vision of the major current issues facing humanity.  Its massive ambition ‒ it is one of the greatest past and current merits of UNESCO ‒ is to promote links between various forms of thought, different ways of looking at problems, and a call to humankind. (Read our box on Human dignity)

To reiterate what I have already stated, the journal’s major contribution is the promotion of a culture which encompasses both a diversity of opinions and respect. This is the culture − and I say this with the utmost sincerity, recalling my family background − I acquired by reading the Courier with passion and enthusiasm. I was a young boy who was eager to learn, and through its pages, I found a source to do so. This is why I write these lines.

The importance of UNESCO and its Courier in today’s world,  and tomorrow’s, is even more significant as the fundamental principles of the Organization’s Constitution are being put to the test by those who promote “the mutual incomprehension between peoples” and contradict these principles “by exploiting ignorance and prejudice”. Let us not forget this.

* On 8 March  1960, UNESCO inaugurated its international campaign to safeguard the monuments of Nubia. French writer and Minister of State for Cultural Affairs André Malraux presided the over the ceremony at UNESCO. Read here excerpts of his text "See, old river, the men who will carry these giants far away from your waters."

* The year 2018 marks the 50th anniversary of the completion of the Abu Simbel heritage safeguarding campaign.

Rector of the University of the Republic and Professor Emeritus at the Rafael Laguardia Institute of Mathematics and Statistics (IMERL) in the university’s Faculty of Engineering. Roberto Markarian (Uruguay) has extensive experience of trade unionism, first as a student and then as a teacher. He was imprisoned for political reasons, from 1976 to 1982, during the military dictatorship in Uruguay.

On the occasion of UNESCO’s 70th Anniversary Celebration in 2015, Markarian spoke on the topic “70 years of UNESCO and its impact on Latin America” in Montevideo, during which he highlighted the role of the UNESCO Courier.