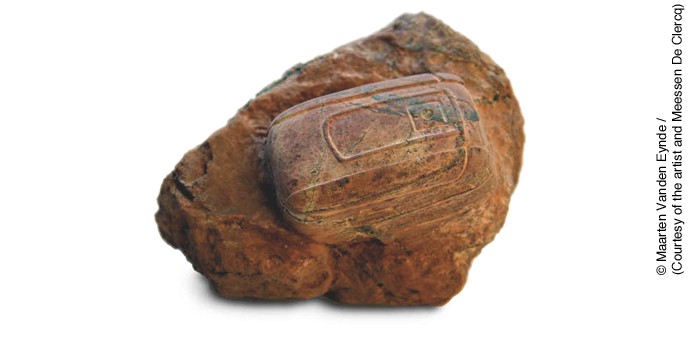 In the geological blink of an eye, a new sphere has emerged, and is evolving at a furious pace. Weighing thirty trillion tons, this is the technosphere. It includes a mass of carbon dioxide which is industrially emitted into the atmosphere – the equivalent of 150,000 Egyptian Pyramids!

The Earth that sustains us may be considered in terms of different spheres. There is the lithosphere, made up of the rocky foundations of our planet; the hydrosphere, representing our planet’s water; and the cryosphere, comprising the frozen polar regions and high mountains. The atmosphere is the air we breathe, and we are also part of the biosphere, made up of the Earth’s living organisms. These spheres have been in existence, in one form or another, for most, or all, of our planet’s 4.6-billion-year existence. Most recently, a new sphere has emerged – the technosphere.

The technosphere, in the sense that we understand it, is a concept that has been developed by the American geologist and engineer Peter Haff, Professor Emeritus at Duke University, in the United States. Like the Anthropocene, it is growing rapidly in recognition – having, for instance, been the focus of a recent major initiative of Haus der Kulturen der Welt (House of World Culture), the international centre for contemporary arts in Berlin, Germany.

Like the Anthropocene, the technosphere is controversial, not least because of the role – and constraints – it affords to humans. It suggests that we have far less freedom, collectively, to guide the Earth system, than we may think we have.

The technosphere encompasses all of the technological objects manufactured by humans, but that is only part of it. It is a system, and not just a growing collection of technological hardware. This distinction is crucial, and may be illustrated by comparison with the more established concept of the biosphere. Originally coined by the nineteenth-century Austrian geologist Eduard Suess, the term biosphere was developed as a concept by Russian scientist Vladimir Vernadsky in the twentieth century. He propounded that it was not just the mass of living things on Earth, but the combination of that mass with the air, water and soil that sustain organic life and the Sun’s energy that largely powers it. More than the sum of its parts, the biosphere  interlinks and overlaps with other spheres of the Earth, while having its own dynamics and emergent properties.

The technosphere, similarly, comprises not just our machines, but us humans too, and the professional and social systems by which we interact with technology – factories, schools, universities, trade unions, banks, political parties, the internet. It also includes the domestic animals that we grow in enormous numbers to feed us, the crops that are cultivated to sustain both them and us, and the agricultural soils that are extensively modified from their natural state to carry out this task.

The technosphere also includes roads, railways, airports, mines and quarries, oil and gas fields, cities, engineered rivers and reservoirs. It has generated extraordinary amounts of waste – from landfill sites to the pollution of air, soil and water. A proto-technosphere of some kind has been present throughout human history, but for much of this time, it took the form of isolated, scattered patches that were of little planetary significance. It has now become a globally interconnected system – a new and important development on our planet.

How big is the technosphere? One crude measure is to make an assessment of the mass of its physical parts, from cities and the dug-over and bulldozed ground that makes up their foundations, to agricultural land, to roads and railways, etc. An order-of-magnitude estimate here came to some thirty trillion tons of material that we use, or have used and discarded, on this planet.

The physical parts of the technosphere are also very various. Simple tools like stone axes were made by our ancestors millions of years ago. But, there has been an enormous proliferation of different kinds of machines and  manufactured objects since the Industrial Revolution, and especially since the Great Acceleration of population growth, industrialization and globalization of the mid-twentieth century. Technology, too, is evolving ever faster. Our pre-industrial ancestors saw little technological change from generation to generation. Now, in the space of little more than one human generation, mobile phones – to take but one example – have been introduced to mass public use and have gone through several generations. 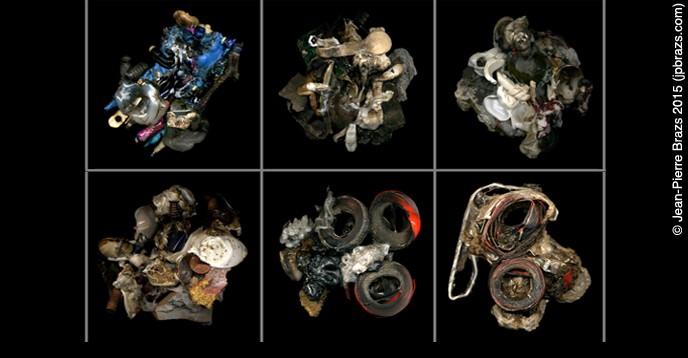 Plastiglomerates, facsimiles of hypothetical future geological matter, made for the Manufacture of Rocks of the Future project, started in 2013 by French artist Jean-Pierre Brazs.

One analogy here may help show the striking nature of this planetary newcomer. Technological objects, including mobile phones, may be considered technofossils geologically, because they are biologically-made constructs that are robust and resistant to decay; they will form future fossils, to characterize the strata of the Anthropocene.

While almost all of the biosphere’s energy comes from the Sun, some of the technosphere is powered by solar energy too – and  other renewable resources such as wind-power, but most is powered by the burning of hydrocarbons including oil, coal and gas. These non-renewable energy sources in effect represent fossilized sunshine that has been amassed deep in the Earth over hundreds of millions of years, and that is now being expended in just a few centuries.

Humans have used power sources such as watermills for millennia, but the enormous burst of energy now needed to power the technosphere is on a completely different scale. One estimate suggests that humans have collectively expended more energy since the mid-twentieth century than in all of the preceding eleven millennia of the Holocene.

The technosphere, though, differs from the biosphere in one crucial respect. The biosphere is extremely good at recycling the material it is made of, and this facility has enabled it to persist on Earth for billions of years. The technosphere, by contrast, is poor at recycling. Some of the waste is all too obvious, like the plastics accumulating in the world’s oceans and on its shorelines. Other kinds, being colourless and odourless, are invisible to us, like the carbon dioxide from the burning of fossil fuels. The mass of industrially-emitted carbon dioxide in the atmosphere is now enormous – nearly one trillion tons, which is the equivalent of about 150,000 Egyptian Pyramids. This rapid growth in waste products, if unchecked, is a threat to the continued existence of the technosphere – and the humans that depend on it.

The technosphere is an offshoot of the biosphere and, like it, is a complex system with its own dynamics. The capacity of our species to form sophisticated social structures and to develop and work with tools were important factors in its emergence.  However, Haff emphasizes that humans are not so much creators and directors of the technosphere, as components within it, and therefore constrained to act to keep it in existence – not least because the technosphere keeps most of the current human population alive, through the supplies of food, shelter and other resources that it provides. Its development has allowed the human population to grow from the few tens of millions that could be kept alive by the hunter-gatherer mode of life in which our species evolved, to the 7.3 billion that inhabit the planet today. Just one technological innovation – artificial fertilizers made using  the Haber-Bosch process – keeps about half the human population alive.

The technosphere today is not evolving because it is being guided by some controlling human force, but because of the invention and emergence of useful technological novelties. There is now a kind of co-evolution of human and technological systems.

Currently, the technosphere might be regarded as parasitic on the biosphere, altering conditions of planetary habitability. Obvious consequences include greatly increased (and accelerating) rates of extinction of species of plants and animals, and changes to climate and ocean chemistry that are largely deleterious to existing biological communities. These changes can in turn damage both the functioning of the biosphere and human populations. Ideally, therefore, humans should try to help the technosphere develop into a form that is more sustainable in the long term. Nevertheless, humans collectively have no choice but to keep the technosphere operative – because it is now indispensable to our collective existence.

Working out the degrees of freedom, within this context, for effective socio-economic and political action, is one of the challenges that the evolving technosphere presents us with. A first step here is to more fully understand the workings of this extraordinary new phase in the evolution of our planet. Here, there is still much to do.

A British geologist of Polish origin, Jan Zalasiewicz is professor of Palaeobiology at the University of Leicester, United Kingdom. He has worked as a field geologist and palaeontologist for the British Geological Survey, and is Chair of the Anthropocene Working Group of the International Commission on Stratigraphy, since 2009.