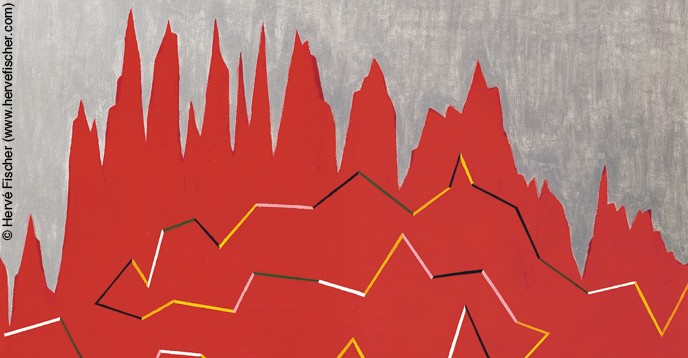 Detail from Speculation, Passion and Anxiety, acrylic on canvas, 2001, by the French and Canadian artist-philosopher Hervé Fischer.

The debates sparked off by the Anthropocene have real scientific stakes, since they could play a role in forging a global model of the evolution of planetary equilibria. But the interpretations could get distorted by those who use the term to prophesy the end of the world – an approach which is counter-productive, argues Francis Chateauraynaud.

You have been studying scientific controversies for a long time. What do you think of the debates around  the Anthropocene?

This is an important debate – scientists are looking for a global model for the planet, which, for the time being, has not been consolidated. It’s a question of establishing a formal system that sets the laws governing the functioning of Planet Earth, by thinking on a global scale and integrating many variables that were previously disconnected. With the computing power available to us today, it is possible to construct a model of the biosphere and to run simulations to study the variations that occur when parameters − such as ocean temperatures and acidity – change.

As a hypothesis, the Anthropocene is of interest to both geologists and  archaeologists, who deal with radioactive or chemical residues in the soil. The question remains whether it is really necessary to talk about a new geological epoch that would follow the Holocene. The relevance of the term Anthropocene will certainly become clearer over time, and it is normal that it should be debated. Some authors, such as the American academic Jason W. Moore and Swedish author Andreas Malm, prefer to speak of the Capitalocene. This reclassification is questionable, though, given the large ecological footprint of the former Union of Soviet Socialist Republics (USSR) in the  twentieth century.

In fact, it is not so much the term Anthropocene that poses a problem as the predictability of the model, on the one hand, and the temptation to embrace catastrophism or determinism, on the other.

Could you tell us more about this tendency towards catastrophism?

One problem comes from the way in which many experts speak on behalf of all  humanity, by using the pronoun “we”. The historian Dipesh Chakrabarty has questioned the function this “we” might serve. To attribute phenomena to humanity as a whole is to forget or mask the fact that many people, who are living in poverty or are from minorities, play almost no part in the advent of the Anthropocene.

The other problem is the idea that “we” have already embarked on this fatal trajectory. To give you an example, in November 2017, the French daily, Le Monde, published an open letter “to humanity” signed by 15,000 scientists, titled “It will soon be too late”. While a measure of reversibility is implied in the adverb “soon”, a marker like “too late”, and the repetition of stock phrases such as “we have failed” or “we did not succeed in”, put us on the slippery slope of catastrophism.

The global thinker (the intellectual who thinks of the world in its global dimension) finds a form of legitimacy here for his flights of fancy and can unfold a great narrative, encompassing all the complexity of the world in a few stock phrases. Even the French sociologist Bruno Latour has entered the field, with his book Face à Gaïa (2015). The temptation to prophesy fuels writings on “collapsology”, like the book by French researchers Pablo Servigne and Raphaël Stevens, Comment tout peut s'effondrer [How Everything Might Collapse, 2015]. While these authors base their arguments on data that few would dispute, the way in which they are  assembled into an end-of-the-world narrative is problematic.

The main criticism against the catastrophist argument is that it doesn’t work. The “heuristics of fear” theory, put forward years ago by the German philosopher Hans Jonas (1903-1993) – who believed that only fearing the worst was enough to raise consciousness – is no longer relevant in the contemporary context. It’s all very well for great minds to sign ominous open letters, but this doesn’t bring us any closer to solutions. The task of scientists is not to announce the inevitability of catastrophe, but to tackle problems at different levels of action.

Catastrophist arguments may be futile, but they are successful...

Not only are they successful, they also provoke hostile reactions. Ecology ends up getting confused with catastrophism. Groups like the Association française pour l'information scientifique (French Association for Scientific Information (AFIS)) have even back-pedalled, proclaiming that we have never been happier on this planet. In these polemics, the arguments of groups like AFIS are all the more successful because they do not call on the public to do anything.

Concretely, though, can we avoid a catastrophe?

First of all, there are many kinds of catastrophes. To announce  a final global catastrophe is to ignore the real facts. It is important to avoid endorsing a closed-off vision of the future, even if it is supported by institutions, and to unlock possible futures. There are always individuals, groups, cities or regions that are inventing alternatives and new possibilities. The book that I co-authored with Josquin Debaz, Aux bords de l’irréversible [On the Edge of the Irreversible, 2017] traces the emergence of a multiplicity of “counter-Anthropocenes” – other possible worlds that are forged in the interstices. While they often appear as forms of “resistance”, they generate other modes of acting and of the perception of the world.

Take, for example, the plan to build a new international airport at Notre-Dame-des-Landes in France. First initiated in the 1960s, the project was relaunched in the early 2000s.  Found to be inconsistent with the COP 21 (Paris, 2015) declarations on combating climate change, it was finally abandoned in January 2018 under pressure from activists. Central to the civic resistance organized by the citizens of Notre-Dame-des-Landes was their collective ability to reverse the order of priorities.

The movements around farmers’ seed systems and permaculture are inspired by the functioning of traditional ecosystems and knowledge, while aiming for self-sufficiency. As with cities in transition, multiple collective experiences work together to redefine and manage common goods, fuelling new ideas for shaping policy.

The future remains open. Every humanist has a duty to prove the prophets of catastrophism wrong. There are countless places on this planet where people are already struggling to overcome the devastating effects of the techno-industrial hubris.