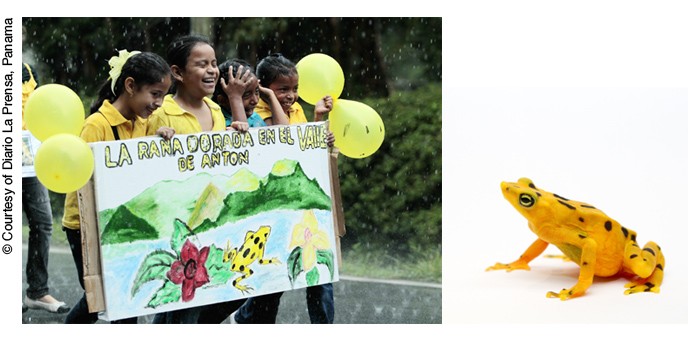 Many scientists view the massive disappearance of several varieties of Central American frogs as a sign of the Sixth Extinction.  This is one of the indications that we are entering the Anthropocene, that some believe will mean the wiping out of a quarter of the world’s mammals, forty per cent of amphibians, corals, and many other species.

In Panama, scientists and national leaders are in a race against time to prevent a legendary species, the golden frog, from disappearing forever. Investigations have shown that humans are indeed responsible, having introduced into South America an invasive fungus that is highly toxic to amphibians.

According to a pre-Columbian legend from the heartlands of Central Panama, the golden frog brings good luck. Anyone who sees one or manages to capture one will have a happy future. Its bright yellow livery, speckled with coffee-coloured patches, was a source of delight for indigenous tribes, who thought that when the amphibian died, its tiny body turned to solid gold.

Discovered on the outskirts of the small town of El Valle de Antón and the Altos de Campana National Park, and endemic to the central area of the Isthmus of Panama, the golden frog – Atelopus zeteki – has long frequented and decorated the streams and rivers of the Panamanian jungle. Panama has made the golden frog an ecological and cultural symbol, even dedicating a national day – 14 August – to it. The frog is so popular that it adorns arts and crafts objects, jewellery, festival posters, and even lottery tickets. It also  lends its name to hotels, craft beers and boutiques. This hasn’t stopped it from disappearing from the forests of the isthmus, though.

According to Panamanian herpetologist Roberto Ibáñez, a researcher at the Smithsonian Tropical Research Institute (STRI) in Panama, the first signs of decline were noticed between 1993 and 1996. Edgardo Griffith, a Panamanian biologist, remembers seeing dying frogs at the end of 2005, during an expedition in El Valle de Antón. It was not known why they were dying, but Griffith’s alarm coincided with other research questioning the status of the amphibian. The frogs were  seen for the last time in the wild in 2007 – in a short video scene shot by the BBC for one of its Life in Cold Blood documentaries on reptiles and amphibians.

The cause of this massacre turned out to be Batrachochytrium dendrobatidis (also known as Bd), a chytrid fungus that is threatening the global population of amphibians by transmitting chytridiomycosis, a disease which, Ibáñez explains, “infects the frog’s skin, disturbing the way it functions”. One of the functions of the frog’s epidermis is to maintain the balance of water and mineral salts between the animal’s body and its environment. In frogs infected with Bd, the transport of electrolytes is disrupted, reducing concentrations of sodium and potassium in the blood, and leading to cardiac arrest.

Where does Bd come from? Probably Africa. This is at least is the most widely accepted hypothesis among Panamanian biologists. The Bd chytrid occurs naturally in the epidermis of the South African amphibian, Xenopus laevis – the frogs were used extensively in human pregnancy tests starting in the 1930s. Unaware that Xenopus laevis was the vector for this disease, the amphibian test was exported to other parts of the world, causing the disease to spread.

In Panama, it is thought that the fungus was transmitted through contact with these amphibians, says Ibáñez. He points out that the chytrid has already spread throughout the country and is now infecting other amphibian species. As a result, the International Union for Conservation of Nature (IUCN) has classified Bd as one of 100 of the world’s worst invasive alien species, because of its “disastrous impact on biological diversity”.

Griffith describes it as a “very effective organism, which reduces biodiversity, changes demographics and the dynamics of reproduction, and wipes out 100 per cent of the individuals of certain species”. It is present everywhere – in Panama as well as in other Latin American countries.

A Noah’s Ark for amphibians

Though no effective treatment against the disease is available today, scientists hope to reintroduce the golden frog to its natural habitat one day. In 2011, the government launched an Action Plan for the conservation of the amphibians of Panama. Involving three components – research, conservation, and education – it is a first step towards resolving the problem. The El Valle Amphibian Conservation Centre (EVACC Foundation), led by Griffith, is also working for the preservation of the golden frog – although, at this stage, it is still being kept in captivity. The Centre’s zoo is home to around 4,500 frogs, 1,000 of which are of the golden variety.

At the other end of the country, in Gamboa – at the edge of a tropical rainforest in the former Panama Canal area – Ibáñez directs the Amphibian Conservation and Rescue Project. Created ex situ in 2009, the project aims to ensure the reproduction of endangered species, especially those affected by the chytrid fungus. It’s a kind of Noah’s Ark, which uses captive specimens in an endeavour to reconstitute populations of the most threatened species – until an effective treatment is found for the Bd fungus. Based twenty-two kilometres outside Panama City, the centre holds 1,200 examples of frogs belonging to nine species – with the exception of the golden frog. But Ibáñez says he hopes to receive some specimens of Atelopus zeteki from EVACC by the end of 2018.

Will the golden frog regain its former lustre? The scientists are convinced it will. Until then, we must hope that the little creature will, itself, have the happy future it symbolizes for the people of Panama.

A freelance journalist specializing in culture and the environment, Karla Jiménez Comrie (Panama) has worked in the United Nations system and has been a reporter for the daily, La Prensa.