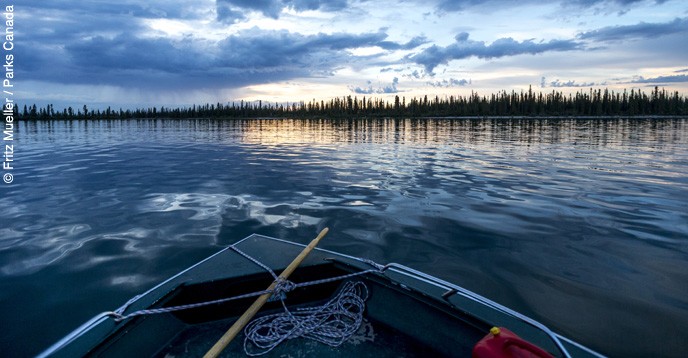 Nightfall at Great Bear Lake. The natives believe that Tudze, or "Water Heart” lives and breathes in the depths of this lake, the last to remain intact in the Arctic.

The Bear Lake People in the central Northwest Territories of Canada have taken their destiny into their own hands. After decades of efforts, they won the right to self-governance in 2016. That same year, they also managed to inscribe their territory, Tsá Tué, in UNESCO's World Network of Biosphere Reserves. They are on the right track to keep alive the water’s heart, on which their own survival depends.

“I go out by boat six hours a day, quite aways – from one side of the lake to the other, depending on the weather. I see nothing but an endless flat land... that’s where my ancestors were. I keep warning my sons: ‘Just look at the land and it will tell you the story it has to tell  you. You don’t want hear it? Yet you can say it by heart.” Who is this man who asks his sons to listen to the voice of their land and chooses to cross a frozen area of over 30,000 square kilometres? His name is Raymond Tutcho. He lives close to the Great Bear Lake, the last large pristine Arctic lake.

Respecting nature and their elders is deeply rooted in the minds of his people –  not more than 600 souls, almost all of whom are Sahtuto’ine Dene. Dene people are an aboriginal group of First Nations who inhabit the central Northwest Territories of Canada. They live in  Déline, a small settlement on the western shore of the lake. Sahtuto’ine means the ‘Bear Lake People’ and Déline, ‘where the water flows’. Tutcho is chief of the new Déline Got’ine government (DGG), Canada’s first indigenous, public self-government, formed in September 2016.

The lake has a Tudze, the Sahtuto’ine believe. This ‘water’s heart’ beats at the bottom of the lake, pumping its life-giving waters through the world’s rivers and oceans. The pristine wilderness of the Great Bear Lake forms the foundation of their cosmology, history and traditional law, and of Déline’s renewable resource economy.

Dene’s spirituality includes appreciating all the elements of the world. Animals, birds, fish, thunder, lightning, water, rocks, all possess a living force and must be respected. All of nature is alive, and everything has its own spirit. Thus, by obeying laws and being effective stewards of the land, the essence of being Sahtuto’ine is retained by the community.

A constant message from their elders is that they must be responsible custodians of the things gifted to them by the earth. As long as these gifts are looked after and kept in good condition, they, in turn, will continue to  bestow their bounty on the people.

“We have unique relationships with the lake and its surroundings that go back thousands and thousands of years,” explains Charlie Neyelle, Elders’ Representative of the government’s Main Council. “Some have prophesied that Great Bear Lake will be the last place where the water will be alive because the water’s heart is still beating,” he says, adding: “But if we kill it and if it dies, everything will die. To prevent that from happening, we need to educate people about the importance of water.”

“We don’t value money,” explains elder Leon Modeste. What the community is worried about is that modernization will bring more development projects to the reserve, upsetting the natural balance.

Managing their own lands

Though the elders of Déline have long exhorted everyone to live in harmony with their surroundings, climate change and increasing development pressures mean that drawing on traditions and taking other measures to preserve their way of life has become imperative.

The community relies on harvesting fish and wildlife to provide for much of its needs. Its renewable resource economy includes limited – but increasing – tourism and infrastructure development.

The establishment of the indigenous public DGG has helped the economy tremendously. Hard-won after decades of political activism, self-rule has meant that the Déline community now has one government, with one set of rules – making it easier to preserve their culture, language, spiritual practices and land-based way of life.

For instance, when it was noticed that the number of caribou dwindled from 500,000 fifteen years ago to 60,000 due to climate change, the DGG introduced limits on hunting the animals. “We all honour these rules,” explains Leonard Kenny, Community Economic Development Officer of the DGG. However, other animals, like moose, continue to be hunted “to a certain extent,” he adds.

In 2013, Déline elders and key community agencies held talks on setting up a biosphere reserve. The Tsá Tué biosphere reserve steering committee was formed the following year. The partnership between government and non-government organizations has broadened the consensus about the critical role indigenous people play in managing their own lands.

In March 2016, Tsa Tué was added to UNESCO's World Network of Biosphere Reserves. The event was unanimously hailed and celebrated by the community. "The lake can't speak for itself, we are going to be the voice for the lake," enthused Gina Bayha, a coordinator for the biosphere reserve.

The Tsá Tué Biosphere Reserve Stewardship Council, comprised of Déline residents, is in charge of biosphere implementation. It includes representatives of the Déline Renewable Resources Council, other key Déline agencies, Parks Canada, elders and youth. Decisions of the council are based on consensus.

Spanning an area of 93,300 square kilometres, Tsá Tué  is the largest biosphere reserve in North America. It includes the Great Bear Lake on the Arctic, the largest lake lying entirely within Canada, and part of its watershed within the Déline District of the Sahtu Settlement Region.

Huge expanses of pristine boreal forest and taiga, rivers and mountains cover much of the watershed, which is divided into three ecological zones: the Taiga plains in the west; the Taiga shield to the south-east, which includes the drainage area of the Camsell River; and the Southern Arctic ecological zone on the north-eastern edge of the lake. Within these eco-zones, the lands are further classified into nine ecological regions and a total of twenty-two eco-districts. Each of these smaller areas have a distinct combination of landforms, permafrost (perennially frozen ground), soils, climate and biological communities which makes them unique.

The waters of Tsá Tué are largely unpolluted, its fisheries are in good shape, and there is an abundance of wildlife. The animals found here in large numbers include the barren ground caribou, grizzly bear, moose and muskox, and a variety of migratory birds, attesting to the high degree of ecological integrity in the reserve. 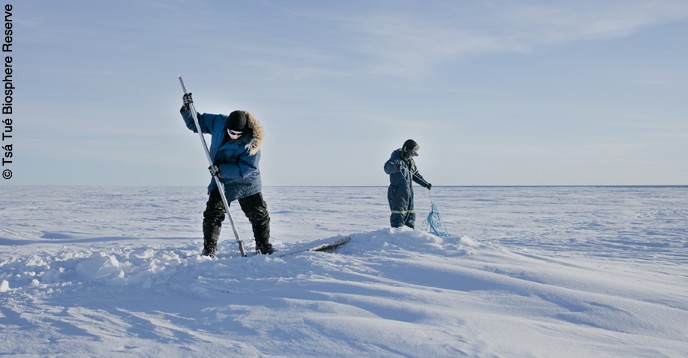 The people of Great Bear Lake essentially live off the renewable resources offered by the lake.

Reconciling tradition with modern living while ensuring that indigenous people can safeguard their economic and social well-being is often difficult – with Canada’s First Nations people, this is no different. Modern life is intrinsically linked to modern technologies, the use of which depends on the knowledge of modern languages. Younger people learn English, and gradually lose their connections to their tribal language.

According to UNESCO’s Atlas of the World's Languages in Danger, there are eighty-eight endangered languages in Canada. Among them, Sahtúot’įnę Yatį́, spoken by the Bear Lake People and spread over four communities in Canada (1,100 speakers in 2006) is considered  ‘definitely endangered’, which means that children no longer learn the language as a mother tongue in their homes. It is only two steps away from becoming ‘extinct’. How then is the knowledge and wisdom that elders possess transmitted to younger generations? As its languages disappear, indigenous knowledge is disappearing too.

On 6 December 2016, Canadian Prime Minister Justin Trudeau announced his commitment “to enact an Indigenous Languages Act, co-developed with Indigenous Peoples, with the goal of ensuring the preservation, protection, and revitalization of First Nations, Métis, and Inuit languages” in the country.

The DGG is working on strengthening the education system and plans to pass their own laws to make sure that the Déline are taught and encouraged to use their aboriginal language at their workplaces.

These efforts reflect both the spirit of open-mindedness in Canada and a return to traditional sovereignty within modernized governance structures. It offers important lessons for other biosphere initiatives to forge new relations of respect, harmony and solidarity between humanity and the planet.

The Tsá Tué experience, it is hoped, will encourage more indigenous communities to manage their own biosphere reserves.

With this article, the UNESCO Courier marks the International Day for Biological Diversity (22 May).