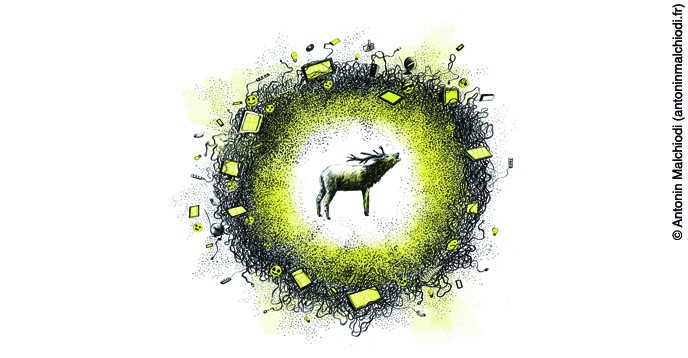 In order to understand the ongoing debates about the Anthropocene, it is not enough to know  just the word – coined in 1980 by American biologist Eugene F. Stoermer and popularized in the early 2000s by the Dutch atmospheric scientist Paul Crutzen. Here is an overview of some key technical terms.

This concept was first put forward in the early 1990s by the Swiss sustainability advocate,  Mathis Wackernagel, and Canadian ecologist William Rees. Their research on the biological capacity of the planet required by a given human activity, led them to define two indicators: biocapacity and the ecological footprint (see below). Since 2003, these two indicators have been calculated and developed by the Global Footprint Network, which defines biocapacity as “the ecosystems’ capacity to produce biological materials used by people and to absorb waste material generated by humans, under current management schemes and extraction technologies”.

This term was put forward by American environmental historian and historical geographer Jason W. Moore, who preferred to use the term  Capitalocene rather than Anthropocene. According to him, it is capitalism that has created the global ecological crisis leading us to a change of geological era. A variant of the Capitalocene, the notion of Occidentalocene, affirmed notably by the French historian Christophe Bonneuil, holds that responsibility for climate change lies with industrialized Western nations and not the poorest countries.

Co-evolution of genes and culture

According to American sociobiologist Edward O. Wilson, genes have made possible the emergence of the human mind and human culture (language, kinship, religion, etc.) and, conversely, cultural traits could favour genetic evolution in return. This happens through the stabilization of certain genes that give a selective advantage to members of the group in which the cultural behaviour is observed. Several anthropologists and biologists have criticized this idea of “co-evolution” between genes and culture, arguing that the transmission of cultural traits is a volatile phenomenon that does not obey the laws of Darwinian evolution. They also argue that, over the past 50,000 years, humankind has experienced significant cultural transformations, whereas the human gene pool has remained unaltered (with only a few exceptions).

According to the Global Footprint Network, this term is “a measure of how much area of biologically productive land and water an individual, population or activity requires to produce all the resources it consumes and to absorb the waste it generates, using prevailing technology and resource management practices”.

The geological timescale is characterized by different kinds of time units – eons, eras, periods, epochs, and ages. To be recognized as such, each subdivision must have palaeo-environmental (climatic features), palaeontological (fossil types) and sedimentological (resulting from erosion by living beings, soils, rocks, alluvion, etc.) conditions, that are similar and homogenous. The International Commission of Stratigraphy and the International Union of Geological Sciences (IUGS) set the global standards for geological timescales. We are currently living in the Holocene epoch, which is associated with human sedentism and agriculture. If all the above conditions are met, the Anthropocene could soon be defined as a new geological epoch.

Scientists are in agreement that, since the 1950s, ecosystems have been modified more rapidly and profoundly than ever before – under the combined effects of the unprecedented increase in mass consumption (in countries belonging to the Organisation for Economic Co-operation and Development (OECD)), dramatic population growth, economic growth and urbanization. The American chemist Will Steffen dubbed this phenomenon the “Great Acceleration”.

The expression “Great Divergence”, coined by American historian Kenneth Pomeranz, designates the industrial boom that has separated Europe from China since the nineteenth century. According to Pomeranz, it was the unequal geographical distribution of coal resources and the conquest of the New World that gave the decisive impetus to the European economy.

Planet (as a unit of measurement)

The ecological footprint has a "planet equivalent", or the number of  planets it would take to support humanity’s needs at any given time. In order to determine a country's ecological footprint, we measure the number of planets that would have been needed by the world's population if it consumed as much as the population of that country. According to the World Wildlife Fund (WWF), "every year, humanity consumes the equivalent of 1.7 planets to meet its needs".

The Great Extinction is the term given to a brief event in geological time (several million years) during which at least 75 per cent of species of plants and animals disappear from the surface of the earth and the oceans. Of the five Great Extinctions that have been recorded, the best known is the Cretaceous-Tertiary, 66 million years ago, which included the disappearance of the dinosaurs. The American biologist Paul Ehrlich has suggested that we have now entered the sixth Great Extinction (although, for the time being, its destruction in terms of number of species is considerably less than in the five others) – 40 per cent of the planet’s mammals will have seen their habitat range reduced by 80 per cent between 1900 and 2015.

For the Russian mineralogist and geologist Vladimir Vernadsky, who devised the concept of biosphere in 1926, Planet Earth is made up of the intermeshing of five distinct spheres – the lithosphere, the rigid, rock outer layer; the biosphere, comprising all living beings; the atmosphere, the envelope of gases known as air; the technosphere resulting from human activity; and the noosphere, the part of the biosphere occupied by thinking humanity, including all thoughts and ideas. Other authors have since added to this list the notions of hydrosphere (all the water present on the planet) and cryosphere (ice).

The technosphere refers to the physical part of the environment that is modified by human activity. It is a globally interconnected system, comprising humans, domesticated animals, farmland, machines, towns, factories, roads and networks, airports, etc.