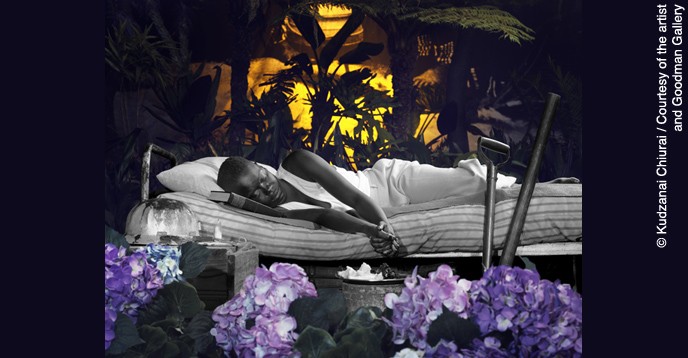 We Live in Silence VIII, by the Zimbabwean artist and plastician, Kudzanai Chiurai, 2017.

Southern Africa’s youth are as talented as young people anywhere else. But with disappearing local traditions, and the lack of avenues to channel their creativity, they live in a cultural vacuum. Consuming content that is bombarded on the internet is not enough – these young people need to be given access to the right tools and opportunities, and to be guided and encouraged to craft their own stories.

The African continent is overflowing with talent: musicians, writers, poets, philosophers, dancers and other artists. These artists and their creative work are the conduits through which cultures pass from one generation to the next. But many of them have lived in exile: Kenyan writer Ngugi wa Thiong’o, Nigerian playwright Wole Soyinka, Congolese novelist and chemist Emmanuel Dongala, French-Congolese author  Alain Mabanckou and Zimbabwean musician Thomas Mapfumo. The list goes on. Some exiled Africans are teaching at prestigious universities abroad where their real value is appreciated – while students in their home countries are deprived of their wisdom.

At the same time, traditional oral literature is disappearing from our cultural scene. When I was young – I grew up in a small village during apartheid in Southern Rhodesia (now Zimbabwe) – my identity and cultural needs were nourished through this literature that elders conveyed through stories recounted in the evenings. Involving acting and singing and dancing in the community, these “lessons” complemented the formal education we received.

It was in school that I read the classics by numerous icons of English, French and American literature. These books did not reflect our reality, and were devoid of thoughts that might have given us any ideas of equality with Whites. But regardless of the censorship, reading opened up a whole new world for me – introducing me to other cultures and to philosophical thinking and reasoning, which led to questioning the status quo.

Today, young Africans know very little about our traditional heritage, and would rather spend their time discovering Hollywood films, or playing games on the internet. Instead of passing down our own culture to our children and grandchildren, and having them create their own art based on that culture, they are paying for foreign entertainment. The outcome is that our youth is disconnected from both our  traditions and the work of contemporary African authors and thinkers.

Yet, our youth is as talented anywhere else in the world. I have witnessed young girls and boys produce the most beautiful music with the most rudimentary instruments, or making some of the best short films using  their smartphones – all without any formal training. Young people would greatly benefit from e-resources in forms of downloadable books. The same applies to visual artists, whose work needs galleries to exhibit their genius. It is also essential to develop policies governing intellectual property to protect their work.

How can Southern Africa shape public policy to fill this cultural vacuum with relevant content? How can African youth learn to reflect before regurgitating whatever comes their way? How can the region reject that which is toxic and incorporate that which is untainted, into their own creative work?

The common argument about a lack of funds may be valid in many cases. But  it is interesting to note that nearly every Southern African country spends millions on football stadiums and on the inflated salaries of footballers. It is true that sport must be promoted and that football stadiums are generally profitable. One solution could be to create a strategy in which sports and culture were merged. Revenue from stadiums, for example, could be channelled to fund libraries, cinemas, theatres, music centres.

Another frequent political argument is that any investment should create jobs. Take the example of Hollywood, which  employs thousands, if not millions, directly or indirectly – economically benefiting the United States, besides allowing it to use its soft power. Now that technology is available to us, we too are in a position to craft our own stories – through literature, cinema, and art.

Being creative doesn’t have to be prohibitively expensive. In 2016, the Italian publisher 66thand2nd, published La felicità degli uomini semplici (The happiness of simple men), a book of short stories on soccer in Africa, by African writers. In Italian and at €18 a copy, not many Africans can afford it. By contrast, Neria, the homegrown 1993 arthouse film scripted by Zimbabwean author and filmmaker Tsitsi Dangarembga and directed by fellow-Zimbabwean Godwin Mawuru – which explores gender issues – was more accessible and  remains the highest-grossing film in Zimbabwe’s history.

While it was nearly impossible for someone of my generation to write their own stories while growing up, today’s African youth have both the possibility and the tools at their disposal to do so. Women writers and philosophers – like Ken Bugul (Senegal), Kidi Bebey (France-Cameroon), Nadia Yala Kisukidi (born in Belgium, of a Congolese father and a French-Italian mother), Virginia Phiri (Zimbabwe), Chimamanda Ngozi Adichie (Nigeria) – are all writing their stories, and Africa needs to listen to and engage with them. Most world-views of Africa continue to be tainted by colonial points of view – African voices, if provided the right platforms, could change that.

With this article, the Courier marks the celebration of UNESCO’s Africa Week in the month of May.

A novelist and essayist, Lucy Mushita was born in Southern Rhodesia, and grew up in a small village during apartheid. Her novel Chinongwa (published in South Africa in 2008, and by Actes Sud in France in 2012) explores this period of her life, before she left her country in 1986, for France, the United States and Australia – eventually making Paris her home.