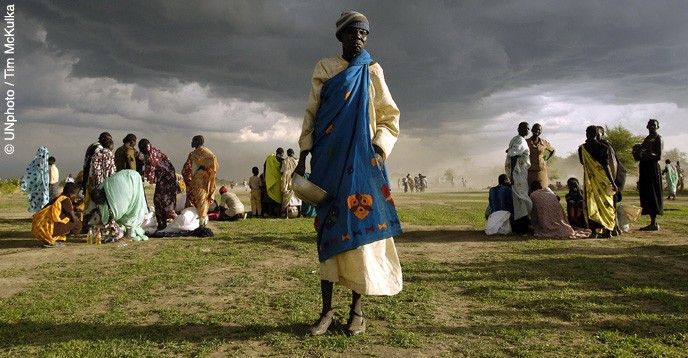 An elderly woman, displaced from her home during the Sudan conflict in 2008, waits for her ration of emergency food aid.

The effects of global warming on the world’s physical landscape often lead to geopolitical changes that threaten to destabilize already vulnerable regions, like the Horn of Africa. The stresses on natural resources undermine the capacity of nations to govern themselves, and increase the chances of conflicts. When compared to other drivers of international security risks, climate change can be modelled with a relatively high degree of certainty. But between predicting and preparing, there is still a long way to go.

The current rate of climate change – higher seas, decreased ice in the Arctic, melting glaciers, extreme rainfall variability, and more frequent and intense storms – are scenarios that settled human societies have never experienced before. These dynamics will impact the foundational resources that people, nations – and the world order built on those nations – depend on for survival, security and prosperity: particularly food and water. These impacts are already contributing to increased state fragility and security problems in key regions around the world – conflict in the Middle East and Africa, tensions over fisheries in the South China Sea, and a new political and economic battleground in a melting Arctic Ocean.

Climate change, by altering the world’s physical landscape, is also changing its geopolitical landscape. If governments are unable to mitigate this, the risks of conflict and instability will increase, and become more difficult to manage. This is the case in many regions around the globe. However, the Horn of Africa is particularly vulnerable, given a combination of structural fragilities and the significant exposure to climate change risks. This raises the likelihood of conflict and instability on the peninsula.

Over time, climate change stresses on natural resources – combined with demographic, economic and political pressures on those resources – can degrade a nation’s capacity to govern itself. This includes its ability to meet its citizens’ demands for basic resources – like food, water, energy and employment – also known as its output legitimacy. The threat to output legitimacy can contribute to state fragility, internal conflict, and even state collapse. Seen through this lens, climate change may present a serious challenge to state stability and legitimacy in the Horn of Africa – a region already grappling with numerous challenges before climate change became a factor.

These challenges have recently been confirmed by the United Nations Security Council in a January 2018 Statement by its President: “The Security Council recognises the adverse effects of climate change and ecological changes among other factors on the stability of West Africa and the Sahel region, including through drought, desertification, land degradation and food insecurity, and emphasizes the need for adequate risk assessments and risk management strategies by governments and the United Nations relating to these factors.”

According to the Fragile States Index of  The Fund for Peace, the Horn of Africa includes some of the most vulnerable states in the world – Somalia, Ethiopia, Eritrea, Kenya, Sudan and South Sudan. The region also exhibits some of the clearest indications of a connection between climate change and conflict – namely, conflicts between agricultural and pastoral communities precipitated by climate-exacerbated droughts and water variability.

For example, prolonged climate-exacerbated extreme drought, such as in Somalia in 2011, can add additional stresses to already tense and resource-scarce scenarios. These stresses could increase tensions and conflict between communities, and  precipitate the need for people to move – impacting the prices of livestock and other goods. This could also lead to an increase in malnutrition and disease outbreaks, and adversely impact food security (For more information, see: American Journal of Agricultural Economics, Volume 96, Issue 4, 1 July 2014, pp. 1157–1182).

Local tensions over access to food and water resources can spill over into neighbouring countries, as people seek to find additional resources and safety – placing more strain on the resources of those countries, which could amplify tensions. In these instances, climate change does not directly cause conflict over diminishing access to water, for example, but it multiplies underlying natural-resource stresses, increasing chances of a conflict. These are scenarios that, in the absence of better governance and natural resource management, are going to become increasingly  pronounced in the future.

Several studies, combined with models and foresight exercises, show with increasing accuracy, the way in which changes in climatic conditions can, if left unmitigated, scale up to higher-order security situations, including a higher likelihood of conflict. A lot of the research to this point, however, has focused on the links between climate change, increased rainfall variability, and conflict. Other scenarios in which climate impacts and security intersect and combine to form the foundation of a new geopolitical landscape include:

Urbanization is occurring rapidly in the Horn of Africa, including along the coast. Coastal cities with burgeoning populations, like Mogadishu (Somalia), Djibouti City and Mombasa (Kenya) are vulnerable to sea-level rise. Rising sea levels threaten to inundate critical infrastructure in these cities, contaminate freshwater supplies through saltwater intrusion, reduce arable land, and potentially displace large numbers of people.

The Gulf of Aden is a critical waterway along the Horn of Africa. As climate change further narrows economic opportunities in the region, an even greater increase of piracy along the coast is likely. Indeed, research has shown that there is a significant overlap between countries showing a high incidence of piracy attacks (off the coasts of Somalia and Eritrea), and the most significant climate vulnerability in Africa. This paints a worrying picture of the kinds of overlapping risks that can perpetuate state failure in the Horn.

Ocean acidification and warming are contributing to the migration and depletion of fish stocks around the world, including along the coast of the Horn of Africa – though the lack of extensive monitoring in this region means there is a gap in the knowledge of the extent of the impacts. Changing ocean chemistry and temperatures can increase the likelihood of international tensions between countries and subnational actors of the Horn that share a coastline – including a heightened potential for conflict over fishing, as their respective fishing fleets roam into neighbouring waters, or compete over dwindling stocks in international waters.

Droughts, coupled with other factors, are already increasing pressure on people in Africa and elsewhere to move. Those without the means to move also risk becoming “trapped”, or unable to move to more secure locations. In the future, decreases in precipitation in the Horn, and increases in extreme weather events, will likely increase the rate and scale of migration. According to  Robert McLeman of Canada’s Wilfrid Laurier University: “States that are already politically fragile are the most likely future epicenters for climate-related violence and forced migration events” (Epicenters of Climate and Security, June 2017). Indeed, of the twenty highest-ranked countries that are deemed fragile states, twelve are situated in areas of the Middle East, South Asia, and Africa, where climate change is expected to create heightened levels of water scarcity. That includes five countries of the Horn: Eritrea, Kenya, Somalia, South Sudan and Sudan.

Changes in water availability, including increased scarcity of, and access to, water exacerbated by a changing climate, also open up opportunities for states and non-state actors to use water as a weapon. In a recent study by  Marcus King of George Washington University, United States, discusses how Somalia has been especially prone to this nexus of climate, conflict and water weaponization (Epicenters of Climate and Security, June 2017). In 2011, Somalia was hit by regional droughts that have been linked to climate change. During this time, as King notes, jihadist fundamentalist group “Al-Shabaab changed its traditional guerilla tactics and started to cut off liberated cities from their water sources so that they could demonstrate at least some kind of power and presence. Climate change, lack of food and continued conflict involving water weaponization took an enormous social toll. Limited access of humanitarian agencies exacerbated by al-Shabaab’s actions led to more than a quarter million deaths and hundreds of thousands of displaced persons.”

While droughts and extreme weather events are not new to this region, the rate of change and the decrease in recovery time between extreme weather events will place additional pressures on governments already stretched thin. These dynamics can make state instability and conflict more likely and enduring. However, there is a small silver lining – climate change, especially when compared to other drivers of international security risks, can be modelled with a relatively high degree of certainty.

While significant uncertainties in predicting local-scale climatic changes remain, existing projections from climate models paint a fairly clear picture of what the future holds. This provides a basis for governments and societies to plan accordingly. However, this heightened predictive capacity does not, by itself, lead to preparedness. The combination of “unprecedented risk” and “unprecedented foresight” underlines the case for a “Responsibility to Prepare” (Briefing to the UN Security Council, December 2017) – a responsibility of sub-national, national, and intergovernmental institutions to build climate resilience into the Horn of Africa’s regional order. A failure to meet this responsibility could significantly strain regional stability in the Horn, and around the world.

Epicenters of Climate and Security

Co-founders and presidents (United States) of the Center for Climate and Security, the Washington DC-based, non-partisan policy centre, which has a team and an Advisory Board of distinguished security and military experts. It is the only institution exclusively focused on the security risks of climate change.