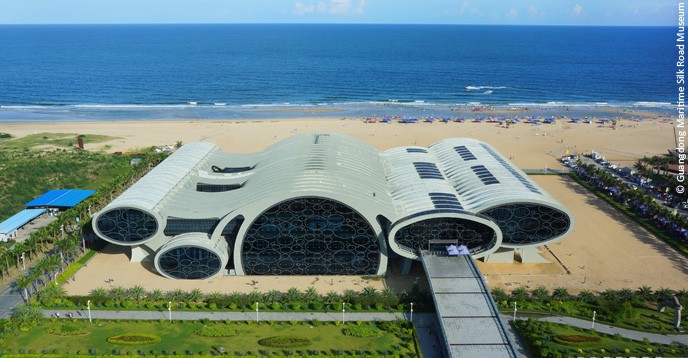 The Guangdong Maritime Silk Road Museum is made up of five oval-shaped buildings, one of which, the Crystal Palace is made of glass and houses Nanhai No. 1.

Nanhai No. 1 is one of the oldest and largest ancient sunken ships ever found in China. When and how was it discovered?

Nanhai No. 1 was discovered in 1987 by a joint Sino-British team, composed of the Guangzhou Salvage Bureau and Maritime Exploration & Recoveries PLC. They were looking for the Dutch East India Company vessel, Rimsburge, but failed to find it. Instead, they accidently found a Chinese merchant ship which sank in the thirteenth century, buried twenty-three metres underwater.

The joint mission tried to retrieve some objects from the shipwreck. Did this work?

They did manage to lift some objects, but totally destroyed the rear of the ship in the process. Luckily, the shipwreck escaped any serious pillaging attempts, because of its location which was visible from the coastline.

It refers to an archaeological way of naming shipwrecks − the name of the discovery spot appears first, then comes the number that reflects the order in which the wrecks were found.

Do we have any idea why Nanhai No. 1 sank at the very beginning of its journey?

The most likely scenario is that the ship was overloaded. Or it perished in a storm.

How many tons of cargo was it transporting?

Nanhai No. 1 was designed for a load of nearly 200 tons. There are estimates that it was carrying 100,000 sets of antiques. Nanhai No.1 had a very rich cargo: besides the 13,000 pieces of porcelain from five famous kilns of the time excavated so far, it was carrying 151 gold, 124 silver and 170 copper sets, and 17,000 copper coins. What we found was totally beyond our expectations. 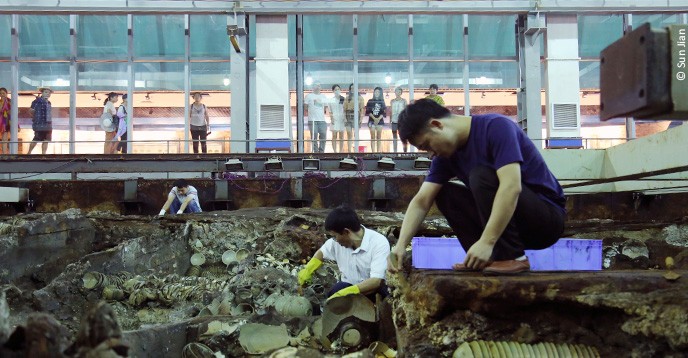 Visitors to the museum participate in the archaeological dig on the wreck of Nanhai No. 1.

Twenty years after it was discovered, the entire ship was lifted out of the water, making it the first “in-whole” salvage of a shipwreck.

On 21 December 2007, after nine months of preparation, the shipwreck was lifted and moved from the seabed to the Guangdong Maritime Silk Road Museum, which was especially designed for it. China’s State Administration of Cultural Heritage and the Transport Department worked together to build a 5,500-ton caisson [a large watertight case], big enough to contain the shipwreck of 35.7 × 14.4 × 7.2 metres. The box was then sunk into the sea and pressed down into the seabed to cover the shipwreck. Then the mud around the box was cleared and a floor inserted, so that the box could be lifted onto the surface of the water. The whole operation cost $20 million.

The lifting of Nanhai No. 1 is considered the first in-whole salvage in the world. However, strictly speaking, there are other examples − two warships, Sweden’s Vasa and the British Mary Rose were similarly salvaged. But China was the first country to creatively use a caisson that was highly protective for the wreck.

Although the salvage operation was totally carried out by the Chinese, we needed advice when it came to archaeological excavations. Before these started in 2013, we conducted tests with the help of Japanese scholars, to decide what was the best way to proceed.

What are the main findings since the excavation of the cargo started in 2013?

The ship is well-preserved because it was buried, and we have the unique chance to conduct the excavation in a very detailed manner. We are getting much more information than if we were working underwater. We have clear archaeological evidence about how people packaged things, and what kind of food people ate on the ship. We found some personal objects, such as delicate lacquerware and pottery, gold necklaces and a Middle East-style belt. So we know that there were probably some foreigners on the ship as well − maybe Indians, maybe Arabs. We also found the bones of three individuals.

Do we know where this merchant vessel was headed?

Chinese ceramics have been found in the Indian Ocean, in India, Persia, and the Middle East – the ship was probably heading to one of these destinations. Maritime trade trajectories were complicated in those days, with many stops. Singapore, Southeast Asia and the East-African shore could have been potential destinations. What is almost certain is that it was sailing from China to the Indian Ocean.

There are few records of shipbuilding technology 800 years ago in China or the rest of the world. What do we know now?

This ship was built around 1216, during the Southern Song dynasty. What is confirmed is that this kind of ship, called ‘Fuchuan’, was made in Fujian province (‘Fu’ means ‘from Fujian’ and ‘chuan’ means ‘ship’). The most distinctive characteristic of a Fuchuan is its watertight-bulkhead technology, which was inscribed on UNESCO's List of Intangible Cultural Heritage in Need of Urgent Safeguarding, in 2010.

Would you say the finding of this ship marks the very beginning of Chinese underwater archaeology?

Yes, thirty years ago, the investigation process was driven by the personal enthusiasm of a few people and private donations. The research office of underwater archaeology at the National Museum of Chinese History was set up in 1987, after this discovery, and its early mission was to support the exploration process. The office could rely on the specific location data provided in 1989 by the museum (now called the National Museum of China) and the Japan Underwater Archaeology Research Institute, thanks to the donation of a Hong Kong merchant, Chen Laifa.

Three investigation missions to Nanhai No. 1 were run by Zhang Wei, one of China’s earliest underwater archaeologists. Conditions at the site were difficult, with poor visibility and strong sea currents. The archaeologists realized then, that the best option was to get the ship out of the water – although it was very expensive.

The Center for the Protection of National Underwater Cultural Relics was set up by the Chinese Academy of Culture Heritage in 2009. In 2014, the government combined it with the underwater archaeology departments of the National Museum of China, to form the China National Center for Underwater Cultural Heritage. The aim was to ascertain the real situation of China’s underwater relics and to play a leading role in protecting them.

What is unique about the excavations on Nanhai No. 1?

Now that the ship is inside the museum, archaeologists, conservation and restoration specialists, digital mapping and recording system specialists − all work together on a daily basis, which is quite unusual. We also simultaneously think about how to exhibit what we have found. When a package is identified, an archaeologist would immediately open it to see what is inside − a museologist would leave it untouched. That is why we always talk to each other.

The Guangdong Maritime Silk Road Museum is the only museum in Asia with facilities for an underwater display of this magnitude. Could you describe it?

The museum was built on Hailing island, close to Yangjiang city, Guangdong province, at a cost of $20 million. It is made up of five oval-shaped buildings, one of which, the Crystal Palace, made of glass, houses Nanhai No.1. The ship is maintained in a gigantic aquarium which replicates the exact water quality, temperature and environment that the wreck was discovered in. Visitors to the museum can view archaeologists as they continue their work, excavating the vessel on-site. They can then ascend to the top floor, to stand under a simulated star-studded sky, as if they were on board the ship at night.

Today, Hailing, which used to be a remote island, is one of China’s top ten tourist islands − the museum is its only modern building, attracting over 300,000 visitors in 2016. The local people have substantially benefited from this tourism.

What does the future hold for Nanhai No. 1?

We will finish the excavation of the cargo in 2018. The next step will be to conserve the hull of the ship, which is still in the box that was used to lift it from the bottom of the sea. We keep the surface of water in this box at the same level as when it was excavated. A spraying water system helps us keep the top of the ship wet as well − it would get rifted if it dried. The shipwreck and the cargo will be desalted and dewatered within the next twenty or thirty years. There are conflicting opinions on how to preserve the wreck. Some have suggested dispatching the ship in parts. But then it can never be reassembled. Others are in favour of conserving the ship as a whole, like the Vasa in Sweden.

Several exhibitions are being planned in China and abroad to raise public awareness of the wreck’s historical value.

Jiang Bo is Director and senior researcher of the Institute of Underwater Archaeology, National Center for Underwater Cultural Heritage, China. With  several publications and prizes both at home and abroad to his name, he delivered a talk, “Nanhai 1, Shipwreck and Chinese Underwater Archaeology” at UNESCO in May 2017.