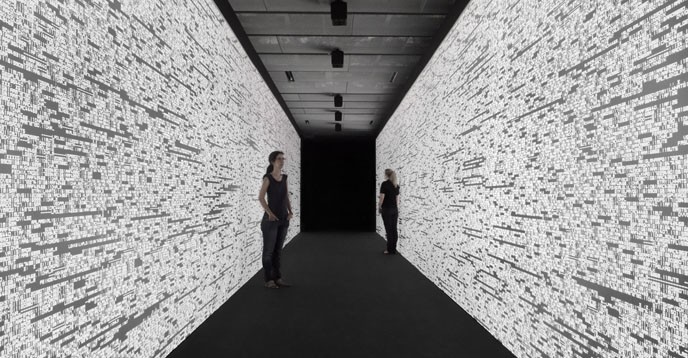 “Data.Path” (2013), by Japanese artist, Ryoji Ikeda, whose installations aim to make the invisible digital network visible and palpable, as it permeates and defines our world.
© Ryoji lkeda

Media and Information Literacy (MIL) is often called to the rescue these days, as the media is threatened on all sides, in totalitarian and democratic regimes alike. The alert was sounded in France on 7 January 2015, when the French satirical magazine, Charlie Hebdo, was attacked. It was an attack on one of the oldest forms of media in the world – caricature.

At the time, I was Director of the Centre pour l’éducation aux médias et à l’information (the centre for media and information literacy (CLEMI). We had to prepare students for their return to the classroom the day after the attack, and meet the needs of teachers and parents. We proceeded as we did after all major catastrophes – we searched our archives for educational fact sheets on caricature and propaganda, and posted media resources online (reference websites, a press review, a series of headlines). We also released an unpublished interview of Charb, which CLEMI had done in 2013, titled, “Can we laugh at everything?” The cartoonist and journalist, whose real name was Stéphane Charbonnier, was murdered in the attack.

This crisis situation showed the strengths of MIL, but also its limitations. We were well-prepared to respond in terms of resources, but we did not anticipate the impact of social media.

Like pre-digital media, MIL must take a leap forward and include in its concerns what data does to the media – it pushes information to the fore through the regulation of algorithms, linked to people’s search histories. It can enclose people in a “filter bubble” to reinforce the biases of confirmation that support preconceived ideas, and reduce the diversity and pluralism of ideas by monetizing content (clicks by views). It is invasive of privacy and threatens fundamental freedoms by using digital footprints for purposes beyond the user’s control.

The latest crisis stemming from fake news – a blend of rumour, propaganda and plot theory – has shaken up MIL. Fake news is even stronger than disinformation, which is a toxic, but generally discernible mixture of truth and lies. Fake news is a phenomenon that falls into the category of disinformation, but its malicious intent is unprecedented, because information technology makes it trans-border and trans-media, and therefore viral.

Media and Information Literacy  must imperatively take into account the digital transformation, which has moved from the “blue continent” to the “dark continent”. In other words, it has gone from surfing, babbling and chatting on platforms controlled by the GAFAM (an acronym for Google, Apple, Facebook, Amazon, Microsoft), to noxious data mining for the purpose of massive manipulation and destabilization.

It is in this respect that the decoding of online propaganda is complex, because it is a question of deciphering a form of disruptive ideology, which is technologically innovative, but paradoxically represents a conservative global revolution − designed to create chaos in existing political systems rather than proposing a system of progressive political thought.

The return of gossip

This is why MIL is obliged to rethink the media and the political and ethical foundations that legitimize it. The role of social media needs to be revisited, as do the exchanges that take place on it. The growth of digital media, which transforms old audiences into new communities of sharing and interpretation, also needs to be taken into account. The renewed tendency to gossip manifested by social media is not insignificant and should not be treated with contempt. A conversation in undertones that conveys a jumble of rumours, half-truths and hearsay, gossip makes what is private, public. It places authenticity above a truth that is perceived as fabricated by elites, far from daily and local concerns.

Social media, then, conveys news where truth is uncertain, and falsehoods have been used to arrive at the truth or by showing that the truth is not all that clear-cut. Hence the temptation to categorize social media as “post-truth”. But this stance reduces its scope and refuses to see in it the quest for a different truth, when the supposedly gold-standard systems of information go bankrupt. Social media centres once again on the eternal journalistic battle between objective facts and commentary based on opinion, that is played out in these models of influence.

In the information-communication sciences, gossip falls within the category of social bonding. It fulfills essential cognitive functions: monitoring the environment, providing help in decision-making by sharing news, aligning a given situation with the values of the group, etc. These functions have traditionally legitimized the importance of the media. But the media is now perceived as deficient and biased – this is symptomized by the reliance on online gossip, relayed by social media. The blame falls less on social media than on those who are responsible for public debate in real life.

In destabilized political situations all around the world, social media is restoring meaning to the regulatory role of social narrative. It highlights the violations of social norms, especially when political institutions boast of transparency, because secrets are no longer safe. Set against newspapers that toe party lines, social media is disrupting the norms of objectivity, which has become fossilized by requiring the presentation of one opinion for and one against. The public shows distrust of the “veracity” of this polarized discourse and is seduced by the strategy of authenticity. It establishes a close relationship of trust with the community of members that now constitutes the audience, and aims to involve them in debates, while basing itself on the principle of transparency. Thus social media pits the ethics of authenticity against the ethics of objectivity.

Social media and fake news consequently make up a textbook case for MIL, which calls upon  its fundamental competence − critical thinking. But this critical thinking must have an understanding of the added value of the digital: participation, contribution, transparency and accountability, of course, but also disinformation and the interplay of influence.

The critical mind can be exercised and trained, and can also act as a form of resistance to propaganda and plot theory. Young people must be put in a position of responsibility while being protected by the adults around them:  they can be prompted to call into question their use of social media and to take into account the criticism against the consequences of their practices. We must also trust their sense of ethics, once it is called upon. In my Massive Open Online Course on Media Education – the MOOC DIY MIL, which received the 2016 UNESCO Global MIL Award – I offer students three critical roles: explorer, analyst and creator. The explorer gets to know the media and data; the analyst applies the concepts, such as source verification, fact-checking, respect for privacy; the creator tries his/her hand at producing his/her own content, sees the consequences of his/her choices and makes decisions about distribution.

The MOOC has given birth to projects such as “Citoyen journaliste sur Twitter” (citizen journalist on Twitter) and “HoaxBuster”, against plot theories. In all cases, the point is to ensure that young people acquire the critical thinking reflexes of MIL, so that they can avoid the traps of hate speech, non-voluntary internet traces and fake news. Other initiatives exist, including some led by UNESCO, which has founded the Global Alliance of Partners on MIL (GAPMIL) − MIL CLICKS is a recent project to take ownership of MIL via social media.

It is also important that MIL exercises critical thinking against the media itself. It turns out that the top press organizations are among the biggest influencers and the ones who tend to push rumours, on Twitter for example, before they are confirmed. The fake news that circulates on Facebook, the first of the social media to spread it, draws its grain of truth from the fact that news professionals are overly responsive to the pressure of the scoop, transmitted before it is checked, in the same manner as the amateurs. And the denials do not generate as much buzz as the rumours!

It is clear that challenges still exist to significantly scaling up MIL. Decision makers need convincing that trainers must be trained, teachers and journalists alike. My research at the Université Nouvelle Sorbonne, within the framework of the TRANSLIT project of the Agence Nationale de la Recherche and the UNESCO Chair in “Savoir-devenir in sustainable digital development”, consists of comparing public policies in Europe. It shows that many resources and training opportunities exist on the ground, provided by organizations or teachers on their own initiative, rather than sponsored by universities. It points, however, to a lag at the public policy level, despite the inclusion of MIL in many national educational programmes. There are few interministerial mechanisms, little or no co-regulation, and little or no multi-stakeholder coordination. The governance of MIL emerges as composite, with three models existing in different countries: development, delegation, or… disengagement (D. Frau-Meigs et al, 2017).

The good news is that journalists are becoming increasingly aware, revising their ethics and realizing the value of MIL. Their ethical leap can help teachers to reposition MIL and provide valid resources to bolster resistance in favour of the integrity of data and media. Actions that are re-establishing the value of in-depth investigation are already taking shape − using data journalism, which reveals information that cannot be obtained otherwise.

Scandals such as the colossal leak of confidential documents known as the Panama Papers have helped moralize political life and restore confidence in the press. Other actions are aimed specifically at fighting fake news using digital means. These include AFP Correspondent, the Agence France Presse blog (which reveals what happens backstage at a large news network); Décodex, featured in the French newspaper, Le Monde (which lists sites according to their unreliability), Google's RevEye (which checks whether an image is genuine in three clicks), and Conspi Hunter on Spicee, the online TV reports and documentaries platform (to debunk plot theories).

In order to be deployed fully and to create an educated citizenship, MIL’s critical thinking must also be applied to the geo-economy of social media. The GAFAM digital platforms, all under California law, have long refused to be classified as media companies, to avoid all social responsibility and to evade any related public-service obligations. But algorithmic monitoring has revealed the ability of GAFAM to exercise editorial control over content that is worth monetizing. In doing so, these organizations define the truth, because it is real or ethical.

The GAFAM mega-media have so far played the card of self-regulation: they make their own rules, they decide to remove sites or accounts suspected of conveying fake news, with no accountability for themselves. But they cannot resist the need for a responsible model for long – it will probably be a hybrid between a “common carrier” and “public trustee”, if they want to preserve the trust of their online communities. The communities could also organize themselves, and even circumvent them, to co-regulate the news with journalists, as is the case with Décodex.  The option of co-designing an algorithm that would have journalistic ethics and fundamental freedoms built into its DNA is undoubtedly one of the alternatives to come, according to digital logic!

Read more about Journalism, 'Fake News' and Disinformation: A Handbook for Journalism Education and Training, issued in September 2018.

This new publication by UNESCO is a timely resource and highly topical subject for all those who practice or teach journalism in this Digital Age.
________

Divina Frau-Meigs (France) is a professor of information and communication sciences at the Université Sorbonne Nouvelle, and holder of the UNESCO Chair “Savoir-devenir in sustainable digital development”. The author of several books, she has just published Public Policies in Media and Information Literacy in Europe: Cross-Country Comparisons, which she has edited along with I. Velez and J. Flores Michel (London, Routledge, 2017).