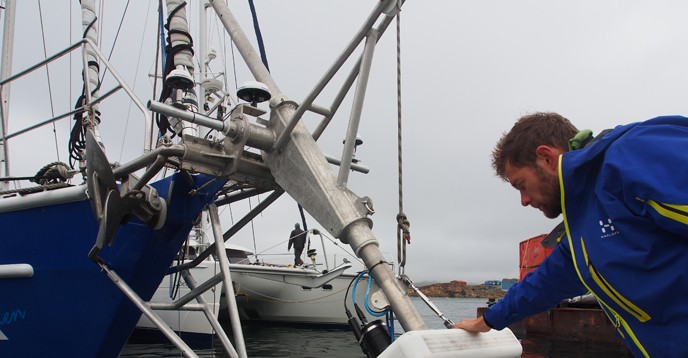 The gap in our understanding of Earth is largely because resources have been more readily allocated to exploring the surface of other planets, as well as the fact that mapping beneath water is a complex business, especially at great depths.

Water absorbs, reflects and refracts light to such an extent that it is difficult to “see” through it with visual media for more than a few dozen metres. Huge swathes of the oceans, especially those far removed from coastal and national areas, are still inadequately mapped. Environments such as those beneath the polar ice shelves and pack ice-covered oceans are as unfamiliar to us today as the deep ocean was for pioneering ocean-floor mappers over a hundred years ago.

But today, with the advent of satellite mapping, multibeam sonar and other advances in remote sensing, we have access to an increasingly broad suite of technologies which make it possible to map the world’s sea-floor in more detail than ever. 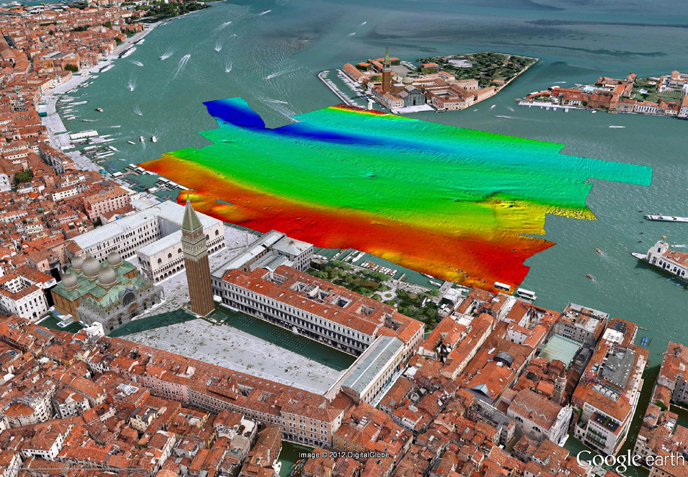 Shallow-water bathymetry in the Lagoon of Venice, Italy, one of the largest lagoons in Europe
© Marzia Rovere

Recent developments in multibeam sonar mapping — pinging sound pulses off the seabed using instruments based on vessels — have increased mapping resolution so significantly that previously obtained data has been made virtually obsolete. Scientific conclusions based on sparse bathymetric information need to be re-examined and refined. Only around 11% of the Arctic has been mapped with multibeam, leaving a vast swathe of the region that needs to be mapped in this way, to ensure that all marine activities in the region benefit fully. The cost of using multibeam technology has fallen sharply since it was first used in the 1960s and 1970s, making it a more economical proposition.

Shallow-water bathymetry in the Lagoon of Venice, Italy, one of the largest lagoons in Europe.

Meanwhile, other techniques, such as geodesy — gravity mapping — from satellites are also coming into their own. By calculating anomalies in gravitational fields, this process can highlight peaks and troughs on the seabed.

However, this needs time, investment and coordination. In particular, the onus falls on the scientific community to explain to the public and funding bodies just why bathymetry — the study of ocean-floor depth and topography — merits more attention.

There has been progress in this area. In June 2016 at the Forum for Future Ocean Floor Mapping in Monaco, Mr Yohei Sasakawa, Chairman of The Nippon Foundation, Japan’s largest private foundation with a long history of supporting key maritime issues, used his conference address to announce a plan to map the entire ocean floor by 2030. This will be done in partnership with the General Bathymetric Chart of the Oceans (GEBCO), which The Nippon Foundation has supported for many years. GEBCO is a joint project of the International Hydrographic Organization (IHO) and the Intergovernmental Oceanographic Commission (IOC) of UNESCO.

Reasons to focus more resources on ocean mapping are not hard to find. The oceans are regions that are at least as fascinating and challenging for humans as other environments on this or any other planet.  Judging by past experience, they hold plenty of surprises for us, with a myriad of beneficial discoveries made during oceanic exploration.  Moreover, they have a much bigger direct impact on our everyday lives than the surface of Mars.

Bathymetry is of vital importance for navigation and coastal management, but also for a growing number of other uses. It is fundamental for the study of deep-water circulation, tides, tsunami forecasting, the upwelling of cold water from lower depths, fishing resources, wave action, sediment transport, environmental change, slope stability, palaeo-oceanography, site selection for platforms, cables, pipelines and offshore wind turbines, waste disposal, mineral extraction, and many more areas.

Perhaps the easiest case to make from a commercial perspective is that the better our knowledge of the ocean floor, the more effectively we will be able to manage marine environments to ensure we carry out fishing in a sustainable and productive manner. Bathymetry is crucial to our understanding of the deep-water habitats of sea life. Better knowledge of the oceans also helps make the extractive industries safer and more efficient. 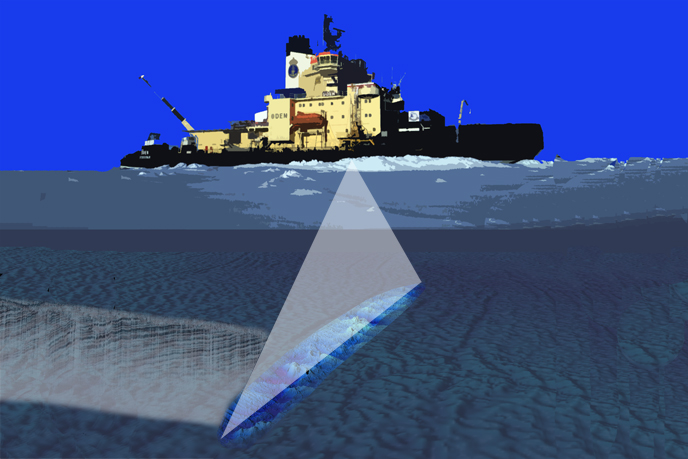 The utility of ocean-floor mapping goes far beyond purely commercial concerns. Take the example of the study of tsunamis.  If scientists know more about the contours of the sea-floor and ocean depths, then predicting how the vast bodies of water disrupted by sub-sea earthquakes will behave will become more accurate. The modelling of tsunami propagation requires both deep-ocean bathymetry and high-resolution mapping near the shore to provide a complete picture of how water will move from deep to shallow depths, and how it will impact the coast.

While better ocean-floor mapping will not improve our ability to predict when tsunamis happen, as they are triggered by seismological events, it will give us more accurate predictions of their direction of travel and likely severity once they have formed.

Ocean-floor mapping is also a vital tool in the effort to track and predict longer-term environmental changes, which will have a major impact on our lives. We know that climate change is occurring, that the oceans have become warmer and that ocean currents have changed. How these events are interlinked is subject to debate, but we do know they are happening and we need to address their impact.

A good example of how an improved knowledge of bathymetry can help us is the work being carried out in the fjords of Greenland and in Antarctica, where most of the world’s ice is located. We have measured, and begun to see, the effect of the inflow of warmer ocean water towards the outlet glaciers of the Greenland and Antarctic ice sheets. The results are thinning glaciers, large calving events (where part of the ice sheet becomes detached), massive ice break-ups and glacial retreats. This process can be seen in action at locations such as Jakobshavn in west Greenland and Pine Island Bay in west Antarctica.

These events lead to increased acceleration of the ice streams draining the glaciers and ice sheets, which in turn contributes to a rise in sea levels. The scale and rate of rising sea levels is hard to predict, which is why we need to look at as many factors as possible, including the rate of ice melt, to make forecasting more accurate.

It is bathymetry that can help us gauge the sill depths of the fjords and the access points where warmer subsurface water can get in and flow towards the glacier, or, in the case of an ice shelf, underneath it. These areas are currently extremely poorly mapped.

For some fjords we have virtually no bathymetry at all, and for regions underneath ice shelves, data is mainly obtained from sporadic experimental forays by autonomous underwater vehicles. Improved ocean-floor mapping in these areas will allow for a greater understanding of extremely complex processes.

While the rewards of improved bathymetric data are significant, it is clear that mapping vast ocean areas can only be achieved through international coordination and collaboration involving the scientific community, naval institutions, and industry.

Vice Admiral (retired) Shin Tani is the Chairman of the joint IHO-IOC GEBCO Guiding Committee, a post he has held since October 2013. Before that, he made a major contribution to GEBCO’s work and activities for more than 24 years. He has been Cabinet Counsellor for the Cabinet Secretariat of the Government of Japan in charge of ocean policy, renewable energy, ocean survey and monitoring, data management, marine land register, and UNCLOS Extended Continental Shelf.