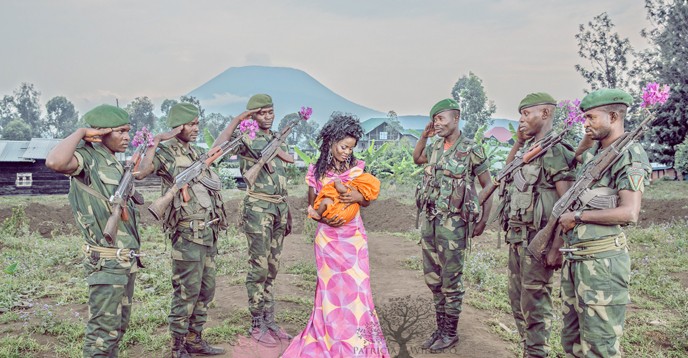 This photograph was adjudged the world’s best picture on the theme of peace, and is part of  the "Look at Me, I am Beautiful!" series of 15 photographs by Patricia Willocq (Belgium), a winner of the Alfred Fried Photography Award 2015.

The series depicts the journey of a little girl born of rape, going through all the big milestones of her life: her birth, her first steps, her first day at school, her wedding, her first day as a mother, etc.

Patricia named the little girl Esther, and chose as her place of birth, Goma — a city in the Democratic Republic of the Congo — which has witnessed horrific war crimes and sexual violence since the 1990s. Esther takes centre stage in each photo, as she grows up, always surrounded by men who support and protect her. They are the very men who in reality are the tormentors, but in the photos, they protect her, and provide her the love and dignity she deserves.

All the children shown in the pictures are born of rape in the "real world", and all the women have been sexually abused. Patricia’s photographs are deliberately staged, almost to the point of being irritating and kitschy. But this brash approach is calculated to provoke — the idyllic staging returns dignity and self-worth to these women, with their festive clothes and beautiful smiles.

“The series is like an African fairy tale,” the Jury stated, “in which tormentors become protectors, good wins over bad. An analogy for the good life, with a right to childhood, schools, a profession, family, self-realization. Not a melancholy but a fierce humanitarian statement that peace is mainly about tolerance, respect and appreciation.”