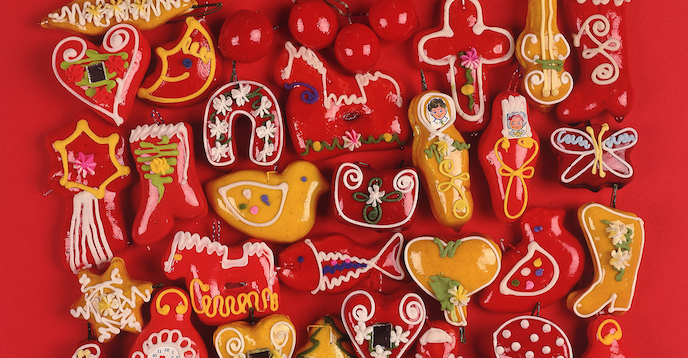 Gingerbread from Northern Croatia is used as a Christmas decoration and is offered as a gift. It was inscribed on the Representative List of the Intangible Cultural Heritage of Humanity in 2010.
© Ministère de la Culture, République de Croatie

Imagine Caligula in the vestibule of his palace waiting for his presents. Or Queen Elizabeth I jumping for joy at receiving silk stockings and garters from her lords. Citing anecdotes, Claude Lévi-Strauss traces the origins of gift-giving  and examines its social role, in our December 1955 issue.

The custom of making New Year gifts has both a simple and complicated history. It is simple enough if we merely think of the general meaning of the custom itself, and examine, for example, Japan's New Year wish, "O-ni wa soto - fuku wa uchi" (Out, all demons! Let good luck come in). Just as the old year should take ill luck away with it, so the enrichment and happiness brought by the exchange of gifts on New Year's Day are regarded as an omen, almost as a magic spell, to ensure that the New Year will continue as joyfully as it has begun.

From this point of view, the Japanese saying is very like those used by Ovid in the first book of the Fastes, describing Roman customs at the festival of Janus. Today, this has become our January 1, although for a long time, even in Rome, the festival did not coincide with the beginning of the New Year. "What is the meaning", the poet asks Janus, "'of the dates, the wrinkled figs and the light-coloured honey, offered in a white vessel?" "It is an omen", replies the god, "they express the desire that coming events may be impregnated with the same sweetness..." Ovid also relates that on the first day of the year, the Roman shopkeepers were careful to open their shops for a short while, in order to make a few sales as a good omen for the rest of the year. Curiously enough, this tradition has been kept up in the French language, in which the word for New Year gifts is étrennes. Shopkeepers reverse the meaning in the use of the verb étrenner, which signifies to make the first sale of the day.

It is more difficult to trace the exact origin of the custom of New Year gifts in the Western world. The ancient Celtic Druids had a ceremony which they performed on the day which corresponds to January 1. They cut mistletoe, which was considered to be a magical plant with protective powers from the oak trees, and distributed it to the people. Hence the name given in certain parts of France, until quite recently, to New Year gifts: guy-l'anneuf, corrupted come times into aguignette (from the French gui : "mistletoe" and I'an-neuf: "'New Year").

In Rome during the second half of December and the early part of January, festivals took place at which gifts were exchanged; those offered in December were usually of two kinds wax candles (which we have adopted for our Christmas trees) and dolls made of clay or some edible substance, which were given to children. There were others, too, described in great detail by Martial in his epigrams; Roman chroniclers related that the patricians received gifts from their plebeian dependents, and the Emperors from the citizens. Caligula took possession of his gifts in person and spent the whole day in the vestibule of his palace for this purpose.

Traces of their dual origin in pagan customs and Roman rites seem long to have been preserved by New Year gifts. Why otherwise would the Church throughout the Middle Ages have tried in vain to abolish them as a barbaric survival? However, by then, these gifts were not only a periodical tribute paid by the peasants to their overlord, in the form of capons, fresh cheeses and preserved fruits; or symbolic offerings, such as oranges or lemons, spiked with cloves, hung like charms above jars of wine to prevent it from turning sour, or nutmegs wrapped up in gilt paper. They were part of a much larger scheme of offerings under which, in certain parts of Europe, even the livestock were beneficiaries, being gratified with juniper fumes and sprinkled with urine.

New Year gifts, as we know them today, are not so much a relic of these popular customs as the democratization of an aristocratic tradition. Very early in modern history sovereigns demanded New Year gifts as a means of augmenting their income and affording a further opportunity for their subjects to prove their loyalty. In France, Henry III and the Duc de Berri were in the habit of receiving New Year gifts (what we would nowadays call a "'luxury edition" is mentioned under this heading in the inventory of the latter's possessions). It is well known that Elizabeth I of England relied on her New Year gifts for her pocket money and the upkeep of her wardrobe; the archbishops and bishops each used to give her from ten to forty pounds, while she received dresses, skirts, silk stockings, garters, cloaks, mantles and furs from her noblemen and such presents as precious caskets, pots of ginger, orange-flower and other confections from her doctors and her apothecaries.

During the European Renaissance, metal pins became a favourite form of present as they were then a great novelty; until the fifteenth century, women had used wooden pins to fasten their clothing. As for New Year cards with pictures and ornamental texts, they are known to have been in use from Europe to Japan. "Some in golden letters write their love", says a seventeenth-century English poet. In France, illustrated New Year cards were in fashion until the Revolution.

To understand why the practice of exchanging New Year gifts is so persistent and so widespread we must look beyond these entertaining details for the underlying significance of the custom. "The manner of giving is more important than the gift", the saying goes, and all peoples, "savage" or civilized, appear to believe that it is better to receive objects as presents than to acquire them oneself, as if the act of giving or receiving has added to the value of the object. The Maoris of New Zealand believed that a magic power, which they called hau, entered into the present and created a permanent link between the giver and the receiver. Similarly, the Roman custom of offering gifts seems to have grown out of a like belief. It originated in the offering of green boughs to the Sabine king, Tatius, who shared the royal power with Romulus. These boughs were taken from the sacred wood of the goddess Strenia, and were thus called strenae in Latin, from which is derived the French étrennes.

Strenia was the goddess of strength. For the Romans and for the Maoris alike, presents were objects endowed with a special power through the act of giving. From where did this power come? By the exchange of gifts, often of mere token value, people give expression in outward and visible form to the inner spirit of community life spontaneous acceptance of interdependence one with another. This annual New Year festival at which flowers and sweets, ties and illustrated cards change hands, is not then to be derided. It is an occasion when all men realize that the society in which they live is based on this very principle of give-and-take. 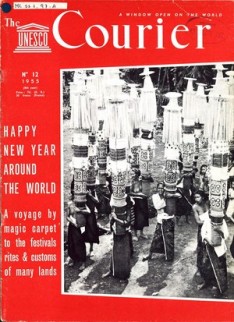