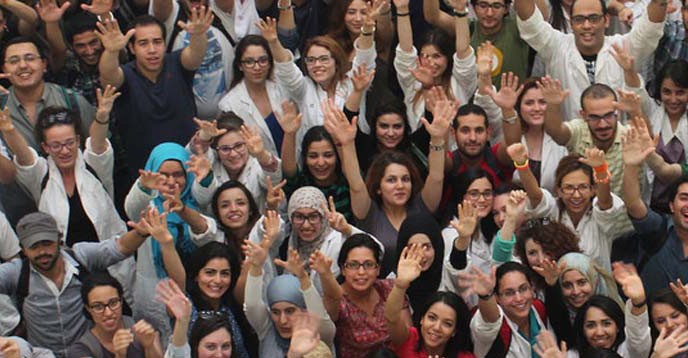 Open Hearts and Minds to Refugees
In July 2017, UNESCO in collaboration with the Federal Research and Methodological Centre for Tolerance, Psychology and Education (Moscow, Russian Federation) organized the award ceremony of the contest ‘Open Hearts and Minds to Refugees’ to raise children's and youth awareness on the rights of and respect for refugees. Students and teachers representing pre-primary, primary and secondary schools from all regions attended the ceremony. Both girls and boys participated in the contest, and were awarded collective prizes, selected through a thorough process that applied a gender equality approach.

Management of Social Transformations (MOST) Programme
Within the framework of the MOST programme, the thematic priority on social inclusion includes a major gender equality focus, integrating key issues of multidimensionality and intersectionality in particular through the analytical framework developed for the Inclusive Policy Lab. Among specific outcomes, a regional policy-oriented research on “Building inclusive societies for older women” was initiated in the Arab region. MOST conducted a participatory analysis in Costa Rica to produce recommendations to ensure the inclusion of women with disabilities in the forthcoming National Policy for Gender Equality 2018-2030. The MOST Discussion Paper on « Les territoires des humanités en Afrique: une approche inclusive et prospective » includes a specific section on “Women Figures” that reviewed anthologies of African women's writings. In addition, MOST is launching work on “masculinities”, initially in the Caribbean, as an innovative contribution to comprehensive understanding of gender issues as they relate to social transformations. MOST is also promoting the role of women in international scientific cooperation, with the upcoming publication of a new issue of the online Women Philosophers Journal and revitalization of the International Network of Women Philosophers.

When Malaysia hosted the 1st Asia-Pacific Ministerial Forum of Ministers of Social Development in Kuala Lumpur, March last year, the theme was “Building Inclusive Societies” and three subthemes, including “women” and “ageing”.

One of the policy recommendations adopted in the outcome document was for UNESCO to launch a research project on older women. As a follow-up to the Ministerial Forum, the UNESCO Office in Beijing will be launching a project to promote policy oriented research and evidence informed policies in North-East Asia that supports the building of an inclusive society for older women and women with disabilities.  It will identify gaps and vulnerabilities faced by these groups.

Kazan Action Plan
The Kazan Action Plan (6th World Conference of Sport Ministers, in July 2017) strongly addresses gender equality in the sport policy follow-up framework, and in one of the five actions of the Action Plan. It also stresses that “gender equality and the empowerment of women and girls in and through sport are not only fundamental components of national and international sport policy but are also crucial factors for good governance, and for maximizing the contribution of sport to sustainable development and peace”.

Silk Roads
Within the context of the UNESCO’s Silk Roads initiative, and in particular the development of an Interactive Atlas on intercultural along the Silk Roads, the contribution of women to building  the rich and diverse common heritage related  this history is highlighted through the illustration of the different selected themes : science, knowhow and technologies, religions, spiritualties and rituals, food production and gastronomy,   design, costumes, etc

Slave Route Project
Within the Slave Route project, the gender dimension of the slave trade and slavery is analysed with a particular focus on the contribution of women to the resistance against slavery and to the preservation of African heritage

Networks of Mediterranean Youth (NET-MED Youth) Project
Since its launch in 2014, the NET-MED Youth Project has applied a two-pronged approach to gender mainstreaming, involving both gender specific activities based on specific indicators and gender mainstreaming in the implementation cycle. For instance, during the past three years, the Project has reinforced the capacities of over 4.000 young women and men from civil society organizations in the fields of gender-sensitive policy planning and media monitoring, advocacy and policy dialogue. Those efforts led to the critical review, revision or design of gender-sensitive national youth policies and local strategies in 7 countries where partner young women are engaged in and committed to fruitful collaboration with national stakeholders. The Project has also produced several publications providing gender-disaggregated data and statistics.

Bioethics and Ethics of Science and Technology
Since its involvement in promoting international reflection on the ethics of life sciences in the 1970s, UNESCO continues to build and reinforce linkages among ethicists, scientists, policy-makers, judges, journalists, and civil society to assist Member States in enacting sound and reasoned policies on ethical issues in bioethics and science and technology. Gender consideration is particularly important for discussion of bioethical challenges in the society. In 2011, an International conference on Gender and Bioethics to explore a wide range of bioethics cases in view of promoting gender equality was held in Kazan, Russian Federation.

Two advisory bodies to UNECO composed of eminent experts from the world namely the International Bioethics Committees (IBC) and the COMEST (World Commission on the Ethics of Scientific Knowledge and Technology) always consider gender issues in their deliberations such as social responsibility and health, human genome and human rights, vulnerability, consent, climate change, robotics.
Reports of the IBC and the COMEST are available from UNESCO website.

In the Arab Region, UNESCO supported the launch of the Bioethics Network on Women’s Issues in the Arab Region (BINWIAR) as a platform of discussion to address bioethical issues that particularly affect wellbeing of women in the region.
The network organises every year a series of conferences on the occasion of the International Day for Women to promote Women’s rights and Bioethics.

In cooperation with the American University of Beirut, a Regional Conference on “Aging Arab Women: Myths, Facts and Implications” was held on 6 and 7 February 2018 in Tunisia.

Recommendation on Science and Scientific Researchers
The Recommendation on Science and Scientific Researchers was also adopted by the Member States during the 39th session of the General Conference in November 2017
The Recommendation gives special consideration for gender equality. It explicitly supports rights of women and girls to access to education and training, as well as establishing gender sensitive working conditions and appraisal systems.