Tacaná Volcano, shared in the borderline with Guatemala, is part of the Central American Core (Nucleo Centroamericano) volcanic chain. It contains fragile ecosystems very rich in wild flora and fauna species of cultural, scientific, economic and biological relevance. Its rich biodiversity and high endemism are found particularly in the high mountain ecosystem and landscapes and in the volcanic edifice which presents geophysical features of great scientific and aesthetic value, representative of humid environments of Andean origin that are found in Mexico.

Municipalities of Cacahoatan, Tapachula and Unión Juárez, State of Chiapas 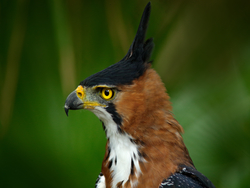 The region of the Tacana Volcano, located in the core of Central America, is a rich reservoir of endemic and other species of Central and South American origin which, in Mexico, are only to be found in this area. The topography is rugged with ecosystems of evergreen medium altitude forests, cloud forests and pine, oak and fir forests. It is the only place in the country where two ecosystems are represented: the Tropical Paramo and the Chusqueal ecosystem.

The Volcán Tacana Biosphere Reserve harbours a rich variety of endemic species of flora (Chasquea martinezi) and fauna (Cyllopsis spp., Limanopoda cinna, Dalla sp. Lepidoptera-Rhopalocera). Included among the biota of the Volcano are a significant number of charismatic or protected species, such as the Canaco tree (Chiranthodendron derbianus) and the Ornate Hawk-Eagle (Spizaetus ornatos). There are innumerable species of orchids and bromeliads.

The rich biodiversity and high number of endemic species are particularly obvious in the high mountain ecosystems and landscapes and in the volcanic edifice which has geophysical features of great scientific and esthetical value, representative of the humid environments of Andean origin to be found in Mexico. Average annual rainfall can amount to 2,000 - 5,000 mm, as in the case of Soconusco. 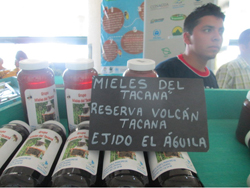 Local economy is based on coffee production and trading. In the past few years, climate changes have create a favorable environments for plagues, which forced a reduction in production and, subsequently, on families' income. Families also rely on a local production of corn, beans and greeneries for their own consumption or regional trading.

Inside the Biosphere Reserve, sustainable foresting activities have been fostered, such as orchides harvesting and collection of herbs and palms that are used for craft design, traditional medicine, and also as food. The Biosphere Reserve management committee has also supported the work of various beekeeping cooperatives, whose production is sold in local markets and nationwide.

Another growing activity is tourism and its chain of service providers, like hotels, catering and transportation. In 2005, park authorities enhanced the infrastructure for hikers to the volcano, with trails, signals and lodges. Nowadays, it receives from 6,000 to 7,000 visitor every year, especially in the month of December.