El Vizcaino is located in the central part of the Baja California peninsula in the Sebastian Volcano region, between the Gulf of California and the Pacific Ocean. Vizcaino includes a great abundance and variety of species of wild fauna and flora, including numerous endemics to the Mesoamerican region and species which are in danger of extinction elsewhere.

Protection of the site is justified by the exceptional value of the desert, mountain and coastal/marine ecosystems, which link the Pacific Ocean to the Gulf of California. The reserve is also of importance for its fossil beds and numerous marine birds, including some under threat of extinction. Grey whale (Eschrichtius robustus) frequents the bay. There are more than 400 prehistoric sites of importance on the peninsula, as well as petroglyphs, wall paintings and ancient ruined structures. 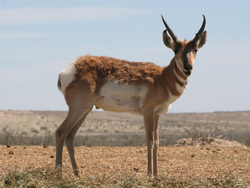 The diversity of physical and climatic environments has led to the development of very rich wildlife, both in form and in its adaptation to this arid region, typical of what is known as the Sonora Desert, one of North America’s four deserts. Four hundred and sixty-three species of flora have been found in the terrestrial part of the Reserve and 37 are known to be endemic to the geographical area in general. The greatest number of plant associations of the whole peninsula is concentrated in this region. Approximately 8.3% of the flora is known to be endemic to the geographical region of the El Vizcaino Desert.

The Biosphere Reserve contains three subdivisions of the Sonora Desert. The sub-Province “Vizcaino Desert” is the best represented, covering almost 95% of the area of the Reserve; the sub- Province “Gulf Coast” occupies a narrow strip along the eastern borders of the sierras to the east of the Reserve; and “Magdalena Region” only covers one percent. Its lagoon complex is the Gray Whale’s calving and mating site and harbours healthy populations of Mexicana Bighorn Sheep, Mule Deer, Puma, Coyote and 64 other species of mammals. It is also a refuge for 125 species of migratory birds and the transition zone between tropical and temperate climates. 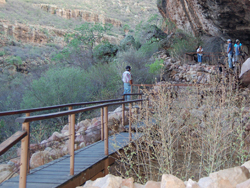 In terms of fishing, every year has registered diminishing fishing resources, due to overexploitation and climate changes. The collapse of this activity would have major social and economic impacts in the region, and there is a potential in aquiculture to become an alternative.

Tourism activities are increasing in the past few years, especially ecotourism, whale-watching, visits to cave painting and sport fishing.