The Veracruzano Coral Reef System National Park (NPVRS) is located in the State of Veracruz, opposite the municipalities of Veracruz, Boca del Río and Alvarado, at an altitude of 0 metres above the sea level, at the geographic coordinates of 19º 02' 16" and 19º 15' 32" of North latitude (N) and 95º 46' 55" and 96º11'45" of West longitude (W); with a total surface of approximately 52,238 hectares and around 2.7 km at its wider side measured from the coast to open sea, in the continental shelf. 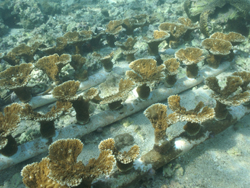 The Veracruz Coral Reef System comprises flats, islands and reefs located on the inner part of the continental shelf rising from a depth of close on 40 m. The area regulates the climate and operates as a barrier against waves and storms. The Biosphere Reserve harbours resident, transitory and migrant fish.

The latter only cross the area as part of their annual migratory routes, such as in the case of the Atlantic Spanish Mackerel (Scomberomorus maculatus) and the King Mackerel (Scomberomorus cavalla). The importance of the coral reef system arises from its relevance for fisheries. Among the pelagic species of commercial interest, mention may be made of the Tarpon (Megalops atlantica), the Crevalle Jack (Caranx hippos), the Horse-eye Jack (C. latus), the Bar Jack (Caranx ruber), the Jurel (Caranx cirus), the Permit (Trachinotus falcatus) and the Atlantic Bonito (Sarda sarda).

Of the species living on the sea bed, the following are of interest: the Black Grouper (Mycteroperca bonaci) and the Scamp (M. phenax), the Red Snapper (Lutjanus campechanus), the Goliath Grouper (Epinephelus itajara), and the Snappers Lutjanus jocu, L. griseus and L. analis and the Flounders Bothus lunatus and B. ocelatus. Commercial catches in the area comprise 89 species of fish, 4 species of shark, 2 species of ray, 1 species of lobster and 2 species of octopus. The taxonomical position of some of these species and ecological and fisheries information may be consulted in Jiménez et al., (in print). 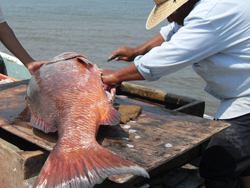 The main economic activities inside the Biosphere Reserve are rudimentary river fishing, sport fishing and tourism. On the transition zone, though, there are important commercial and industrial enterprises, some of which spill into the basin the so-called aguas negras (black water), with industrial and agrochemical waste.

It is a major threat for the environment, but also for fishing activities. The latter is fundamental for the local economy, as it envolves thousands of local families who rely on the activity for eating, as well as a network of local, regional, national and even international traders.

Tourism has been growing steadily, as the beach city of Veracruz is at a convenient distance from Mexico's biggest cities and has a good hospitality infrastructure. However, low-impact ecotourism is still underdeveloped.