The Sierra Gorda Biosphere Reserve is located in the State of Queretaro in northern Mexico. Its strategic biogeographical position between the Arctic Neotropical and the Mesoamerican Mountain regions makes Sierra Gorda one of the most ecologically rich and diverse places in Mexico. It comprises 14 vegetation types, dominated by the tropical sclerophyllous forest. The conservation of the ecosystems of Sierra Gorda is essential, they host a number of threatened species and serve as a refuge for migratory species. 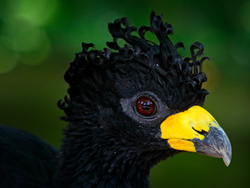 The rugged topography of this Biosphere Reserve, with altitudes ranging from 260 to 3,100 m above sea level, rainfall fluctuating between 350 and 1,800 mm and its location in the convergence of the Nearctic, Neotropical and Mountain Mesoamerica realms, all contribute to a wide mosaic of habitats.

The Reserve is home to the Jaguar, the Yucatan Brown Brocket, the Mexican Black Bear, the Spider Monkey, the Otter, the Great Curassow, the Crested Guan, the Bearded Wood Partridge Dendrortyx barbatus, the Military Macaw Ara militaris, the Red-crowned Amazon Amazona viridigenalis, the Tucan, the Emerald Toucanet and the American Crocodile. It also hosts endemic species such as the Querétaro Pocket Gopher Pappogeomys neglectus, the Autochton siermadrior butterfly and a great number of fish and troglobitic arthropods . 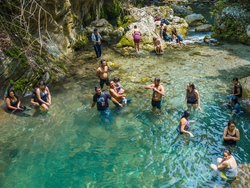 Agriculture, livestock raising, forestry and fishing are the Biosphere Reserve's main economic activites. Fruit and coffee production, for instance, is a big source of revenues for the region.

Most of the livestock raising is done at extensive level. However, there is a pilot program carried out by the Reserve's management to introduce more eco-friendly holistic and intensive forms.

In 2003, an archeological site in the area was declared a UNESCO World Heritage Site, which, along with the natural beauty of the region, have been attracting a big number of tourists.