Considered one of the most important protected areas in the western part of Mexico due to its rich natural resources, its extension and its environmental role in the region, Sierra de Manatlan is very diverse biologically, besides providing a safe water source to more than 430,000 inhabitants.

Sierra de Manatlan has 13 types of vegetation covering, where 64% of all species in the State of Jalisco and 25% mammal species in Mexico find refuge.

The major goal of the reserve is to implement an alternative productive diversification of agrarian communities in ecotourism, sustainable forest management, agriculture and handicraft. 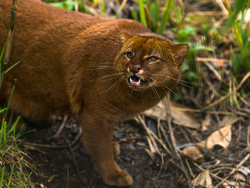 The Sierra de Manatlan Biosphere Reserve is located in the transition of the Nearctic and Neotropical realms and encompasses parts of the Sierra Madre del Sur with a wide range of altitudes, climates and soils. It features both tropical rain forests and mountain pinewoods, in a diversity of landscapes that cater for hundreds of species.

For instance, the region is home to over 350 bird species, some of which are at risk of extinction, like the military macaw (Ara militaris) and the lilac-crowned parrot (Amazona finschi). The region is also home to a variety of endemic species, such at 13 types of reptiles and several species of wild crops. Discovered in the 1970s, the wild maize (Zea diploperennis) actually raised awareness on the necessity to create a Biosphere Reserve in the following decade.

Throughout the Biosphere Reserve, there are 32 small agrarian communities, including those of indigenous cultures. They make their living mostly out of subsistence agriculture and farming, as well as foresting. There is also a very rudimentary coffee production.

In the transition zone, though, larger-scale agriculture is present and services related to tourism and the port in Manzanillo also contributes to the local economy. In this area, local populations are constanstly threatened by timber companies, who have been ignoring their property rights over the land.