Sian Ka’an Biosphere Reserve, also considered a UNESCO Heritage Site, is the largest protected area in the Mexican Caribbean. It is located in the east coast of the Yucatan Peninsula, and is home to a vast biodiversity, especially bird and marine species, in its tropical forests, mangroves, marshes and barrier reefs.

In the language of the Mayan peoples, Sian Ka’an means the “origin of the sky”. Tulum, a beach resort, and the world famous Mayan ruins located within the Biosphere Reserve limits, attract a large number of tourists each year. 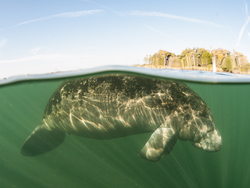 The Biosphere Reserve has an undisturbed interface of sea and land along a well-conserve coastline, with tropical forests, mangroves and marshes. Its diverse tropical forests, savannahs, pristine wetlands and part of the Mesoamerican Barrier Reef provide a habitat for a remarkable flora and fauna.

This includes charismatic mammals, like jaguars (Panthera onca), pumas (Puma concolor), ocelots (Leopardus pardalis) and tapirs (Tapirus bairdii). Among the marine invertebrates, mention should be made of the 84 species of coral and the 276 species of crustaceans. It appears to be the location in Mexico with the most similarity to the Antilles. It is a nesting area for turtles, sea and marshland birds, and is notorious for its special life developing in underground, flooded galleries.

It is also home to more than 300 species of birds, 120 of which are migrant species.

The place is also known for its ‘cenotes’, a natural pit that exposes groundwater underneath, which also hosts various communities of life, some of them endemic. 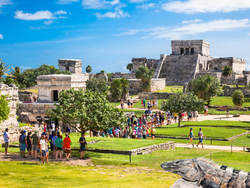 After a historic abandonment of the area, Sian Ka’an has been attracting a substantial number of both national and international tourists, since UNESCO appointed the region a World Heritage Site in 1987. Its main attractions include beautiful beaches and the Mayan ruins in the Southern part of the so-called Mayan Riviera. This unplanned massive increase, though, pose a threat to the environment, due to garbage and sewage problems. Several initiatives aim to promote more sustainable forms of tourism.

On the other hand, the inhabitants of the Biosphere Reserve also make a living out of fishing, especially of lobsters.