The Seaflower Biosphere Reserve is an oceanic archipelago with coral banks, small islands and islets forming part of atolls, which are rare systems in the Caribbean Sea.

Important Notice: The site description for the Seaflower biosphere reserve is the subject of an ongoing process of revision by the competent authorities, further to the Judgment of the International Court of Justice of 19 November 2012 establishing a new maritime boundary between Colombia and Nicaragua.

Given its oceanic island character and the small size of the islands, the terrestrial fauna of the Archipelago is diverse but not very abundant, maintaining a relatively high degree of endemism. Among the terrestrial fauna resources, the presence of species of black crab (Gecarcinus ruricola), shanky (Gecarcinus lateralis) and white crab (Cardisoma guanhumi), which are captured and traded locally, stands out. 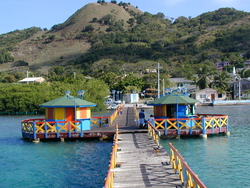 Most of the land in the transition zone is destined to densified human settlements that make up the urban structure and corridor, international airport, seaport, coast guard station, road structure, extensive development of tourism activity, commercial and hotel infrastructure. There are also some soils destined to agricultural activities mainly on the northwestern side of the island of San Andrés, where the operating infrastructure of solid waste management, wastewater, energy generation, and fiber optic cable services also operate.