Up in the Andean mountain range in the San Juan province in Argentina, the San Guillermo Provincial Reserve was initially created in 1972 with the goal to conserve and protect the Vicuña, a native South American camelid then at risk of extinction. UNESCO acknowledged it as a biosphere reserve in 1972.

With marked contrasts among its three eco-regions (High Andean, Puna and Woodland), the area is home to the largest population of Vicuña and Guanaco in Argentina, with both populations on the rise. Furthermore, the region features a spectacular mosaic of deserts and high altitude grasslands, as well as thorny bushes in the low valleys, as the temperature gets warmer.

The biosphere reserve is critical not only to conserve the local biodiversity, but also to secure sustainable water sources for the settlements downstream. Its population makes a living mostly from mining and, on a smaller scale, tourism. 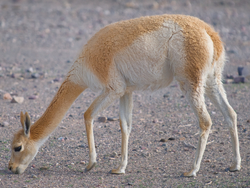 The Andes is the largest mountain range in the world, extending from Venezuela all the way to the southern parts of Argentina and Chile. The San Guillermo Biosphere Reserve, in the western bit of Argentina, is part of the largest arid ecosystem in South America, with a complete ensemble of native fauna and flora.

The region is known for its population of vicuñas (Vicugna vicugna) and guanacos (Lama guanicoe), but it is also home to a wealth of species, such as the Suri Cordillerano (Pterocnemia pennata), the puma (Puma concolor) and the highly endangered Andean mountain cat (Leopardus jacobita).

Up in the higher areas of the biosphere reserve, the landscape is comprised of deserts and grasslands, while thorny bushes thrive in the somewhat warmer lowlands.

Located in the northwest of Argentina’s San Juan province, the San Guillermo Biosphere Reserve has no permanent population, but rather a group of park rangers and occasional miners, whose number can go as high as 3,000.

With substantial reserves of metal ores, the region has received investments in the mining sector worth of over USD 3 billion. These activities raise are of special concern, due to its impact in this fragile environment. The other economic activity is tourism, which has great potential, but is still very limited, in part because of its difficult access.