Located over the mouth of Yucatan’s biggest groundwater basin, between the towns of Celestún and Maxcanu, the Ría Celestún Biosphere Reserve is part of a vast wetland corridor in the west of the peninsula. The fresh water from underground aquifers has an outlet in the site, which makes the Biosphere Reserve a unique example of a natural wetland in the area. Its mangroves, dunes and low rainforests are home to a substantial natural heritage, particularly in terms of birds. In fact, the area is a resting place for a huge number of migrating species.

Although the area is particularly known for its pink flamingos, the pristine beaches of the area, with waters ranging from turquoise to light blue, attract thousands of visitors every year. 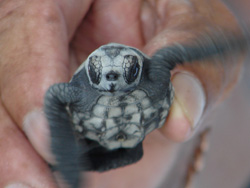 The Biosphere Reserve is peculiar because of its great diversity of environments, which comprise various interdependent ecosystems, such as the shallow continental marine platform, the coastal dunes, the mangroves, lagoons, marshes and low rainforests. These areas are habitats to almost 1,150 species, among mammals, birds and vegetation.

The beaches and lower dunes of the Biosphere Reserve are used as a nesting place for turtles, and various projects are aimed at protecting these ecosystems. 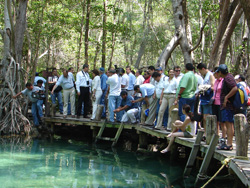 Tourism is one of the main sources of income to the community, who can mostly find jobs in the region’s hotels, restaurants and tour operators, especially in the town of Celestún. It has been growing steadily over the past few years, from 15,000 visitors in 1998 to around 70,000 in 2013. Attractions include the petrified woods (fossilized remains of terrestrial vegetation) and cenotes (natural pits with groundwater underneath).

The area has a population of almost 7,000 inhabitants, who, besides tourism, make a living mostly of fishing and rudimentary production of salt. There are also very limited farming and forestry activities