The Reserve is located in the physiographic province “Llanura Costera del Golfo Sur” and the subprovince “Llanuras y Pantanos Tabasqueños”; here predominates the topographic formations of barrier plain (beaches) towards the coast, and over all the coastal floodplain. They are originated by the mouth of the Grijalva and Usumacinta Rivers. 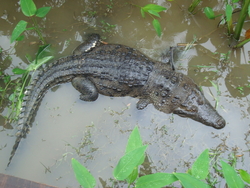 Mangroves grow in locations where brackish water from the Gulf of Mexico enters and the soils where they settle contain large concentrations of organic matter and nutrients that give life and feed the marine species that live among their roots.

There are four species of mangroves: the Red Mangrove, the White Mangrove, the Black Mangrove and the Button Mangrove. Regarding the fauna, 52 species of fish, 68 species of reptiles, 27 species of amphibians, 104 species of mammals and 255 species of birds, have been identified so far (this last figure includes both migratory and resident species from aquatic and land habitats).

The most representative species among the group of birds are the Jabiru stork, the Maguari stork, the Páspaque, the Ruddy Ground Dove (Columbina talpacoti), the Muscovy Duck (Cairina moschata), the Black-bellied Whistling Duck, the Podilymbus podiceps, the Peregrine Hawk and the Ibis, among others. The most important rivers in the Reserve are the Grijalva and the Usumacinta, annually discharging 90 million m3 of water, placing this hydrographical region seventh in the world. Associated to this discharge is an average 7.3 million m3 of sediments and nutrients, favouring fisheries in the Gulf of Mexico. 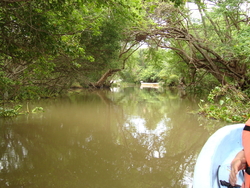 Local population carries out basic agricultural activities, mainly for subsistance or for limited trading. They also make their living with fishing and the production of crafts with natural fibers and leather.

On the other hand, local authorities have been promoting the Biosphere Reserve as an ecotourist destination since 2002.