The Ñacuñan Biosphere Reserve is located at the semi-arid plains on the footsteps of the Andes, in the Argentinean province of Mendoza. Among its upland grasslands, shrubby steppe and herbaceous woodlands, the Prosopis flexuosa stands out, as it has historically served the indigenous populations with wood and food, as well as it generates microhabitats through changes in the microclimatic conditions in terms of the hydric dynamics, light and soil conditions.

After thorough conservation efforts, species of fauna that were hardly seen in the area anymore now are seen more frequently, like foxes and the elegant crested tinamous (Eudromia elegans). 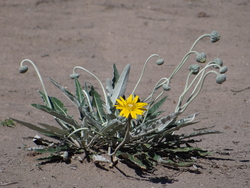 The Ñacuñán Biosphere Reserve belongs to the warm desert and semi-desert biome, and to the Monte biogeographic province. It is located in the central-east of Argentina in an extensive intermontane plain at 540 m.a.s.l. formed by sediments coming from the meteorization of the rocks of the mountains. Aeolian and hydric processes are manifested in sandy loam soils and in dunes, depressions and temporary furrows that model undulations in the terrain. The climate is desert, warm temperate, with average annual rainfall of 330 mm, mainly in summer, and high evapotranspiration, which gives a negative water balance. The dominant plant community is the open forest of carob tree (Prosopis flexuosa). The jarilla (Larrea spp.) dominates the shrub layer accompanied by a rich variety of grasses. Around 190 species of wildlife are found, either permanently or temporarily, in the reserve. Vulnerable species such as the land tortoise (chelonoidis chilensis), the crested eagle (Chlamydophorus truncatus), the crowned eagle (Buteogallus coronatus) and the gray fox (Lycalopex griseus) are protected in the reserve as are maras (Dolichotis patagoum), iguanas (Tupinambis rufescens) and pumas (Puma concolor). Many species have developed strategies to adapt to the desert such as underground life, nocturnal activity and physiological mechanisms to reduce water loss. The forest that was cut down in the early 20th century to produce charcoal is now in full recovery. 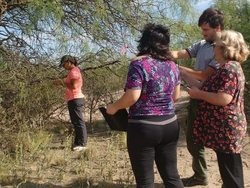 The small community of Ñacuñán has a shelter school, Nuestra señora del Carmen de Cuyo N 8-366, which is attended by children from a large area. The villagers have formed a cooperative for the construction and sale of solar ovens to cook food while saving gas and firewood. The main economic activity in the area around the reserve is cattle ranching, and studies on the rational use of pastures and livestock management are directed at this activity. In recent years, a community project has been developed with the objective of producing flour from the fruits (pods) of the Algarrobo tree, which allows the community to obtain a source of income under sustainable forest management. There are sectors within the BR destined to trekking and camping areas. The reserve is visited by amateur ornithologists all year round. There is also a biological station that houses national and international researchers.