Situated in the south-west of Ecuador, this biosphere reserve includes a large number of ecosystems ranging from high mountains down to coastal and marine areas along the Pacific. It includes the Las Cajas National Park and the Quimsacocha National Recreational Area, which play an important role in water provision and regulation.

The Páramo ecosystem is composed mainly of tufted grasses (bunch), mostly ranging between 3 000 and 4 000 amsl (above mean sea level). At its lower limit are found the ceja andina shrub (located in the transition between highland montane forest and páramo) and cultivated fields where Andean forest has been deforested. The dominant genera are Calamagrostis and Festuca.

The Montane forest ecosystem is one of the most diverse ecosystems in the world. It performs a number of important ecological functions, such as water harvesting and erosion control. It is also very fragile as its steep slopes make the forest extremely vulnerable to accelerated erosion under heavy rain conditions. The forests extend along the western slope of the Andes mountains, ranging from 300 to 450 amsl to 3 000 amsl.

Cloud forest is located on the western flank of the Western Andes. It is characterized by very irregular relief with steep slopes that result in significant topographic variability with an altitudinal gradient ranging between 2 200 to 2 900 amsl. The key feature is high rainfall and humidity with the constant presence of haze, interspersed with vegetation. These waters drain into creeks and streams, which function as important sources for the major water systems of the western region.

The mangrove ecosystem comprises tidal areas with fluctuations of 5 amsl. Depending on the location it may be either permanently flooded or subject to twice-daily floods. This gradient flood level and saline soil influences the structural and compositional characteristics of the vegetation. In the Pacific, the amplitude of tidal variation is greater than in the Caribbean and mangroves, therefore, extend far into the river deltas. This dynamic produces intense succession processes, resulting in the formation of almost monospecific communities. 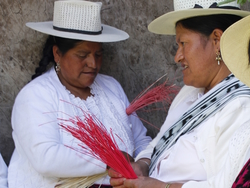 Around 838 800 people live in the biosphere reserve: 6.79 per cent inhabit the buffer zone and 93.21 per cent live in the transition zone. The core zone is unpopulated.

The coastal territory is largely characterized by large and medium-scale agricultural and aquaculture activities, which function as important export items for the national economy. The expansion of arable soil and shrimp farming has absorbed remnants of forests in the foothills of the western mountains and mangroves.