The Lauca Biosphere Reserve is situated in the Puna biogeographic region, in the northern part of Chile in the Andean Chain. It is home to unique flora, with edemic species, some of which of great medicinal importance, as well as to fauna that include vicuñas, guanacos, vizcachas, foxes, quirquinchos, pumas, tarucas, suris or ñandús and a great variety of birds such as flamingos, guallatas, etc. (this is one of the areas where the greatest number of bird species described for Chile are found). 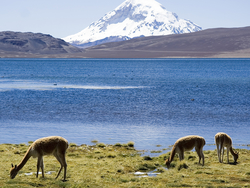 The following plant formations are to be found: Low "Tolar" scrubland: characterized by shrub-likeplants with resinous leaves and branches, with stunted growth forming relatively dense scrubland with dominant trees reaching up to one metre high; High "Queñoal" scrubland: small trees of up to 5 high, growing on the slopes of the mountain ranges; Humid "Bofedal" steppe: this comprises the vegetation above 4,000 m above sea level where running water exists. It includes the association of Oxychloeandina characterized by its marshy cushion form; Pulvinate plants: at altitudes of 3,800 m above sea level and above, includes the association of laretia compacta - parastrephia quadrangularis. Its mainspecies, "Laretia", grows in a very compact cushion, and may measure up to 2 m diameter and one metre high.

One of the most important habitats is the “Bofedales” or highland wetlands as they are a source of food and water for both wild and domestic fauna.

The native fauna is a very important resource making it attractive both ecologically and as a landscape. There is a great variety of birdlife, close to 150 species, that is to say about 30% of the total number of species in this group in the country.

The Lauca ecosystem is home to the Aymara people, one of the indigenous Andean cultures that managed to adapt to the ecological conditions of the highlands and the desert, creating complex and effective agricultural, livestock and social organization systems. These systems involved a high degree of knowledge in the domestication of plants and animals, developing intensive agriculture, adequate management of camelid livestock, systems of storage and conservation of food such as dehydration of meat (charqui) and vegetables (chuño potato), pottery, textiles, hydraulic works, accounting and timekeeping systems, as well as an intricate system of communication routes that allowed them to develop trade networks with inhabitants of different areas. Most of these sophisticated practices have been abandoned.

Nowadays, most of the economic activity is directed to livestock raising of domestic camelids (Llamas and Alpacas), obtaining meat and wool for marketing and domestic consumption for the indigenous Aymara communities.