The Laguna Oca del Río Paraguay Biosphere Reserve is located in Formosa Province in northern Argentina. The natural vegetation of the reserve comprises gallery forests, wetlands and savannas along the meanders and oxbow lakes of the Paraguay River. The gallery forests are densely structured presenting a high biodiversity with abundant epiphytes, lianas and orchids. 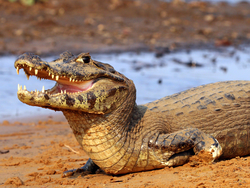 The Laguna Oca del Río Paraguay Biosphere Reserve is located on the flood plain of the aforementioned river, including a portion of the Chaco plains.

The most important woody species are species of the genus Prosopis like the white carob tree (Prosopis alba), the black carob tree (Prosopis nigra) and espinillo (Prosopis affinis); species of the genus Tabebuia like the palo cruz (Tabebuia nodosa) and in smaller quantity the paratodo (Tanebuia aurea), tatané (Chloroleucon tenuiflorum), quebrachillo (Aspidosperma triternatum). There are also specimens of the Caranday palm (Copernicia alba) in a dispersed form. Among the bush species, the churqui (Acacia caven) and the aromito (Acacia Aroma) are worth mentioning. Among the herbaceous species are those of the Poaceae family, the most important of which are: espartillo (Elionurus muticus), paja boba (Paspalum intermedum) and paja brava (Panicum prionitis). Near Payaguá Island and Laguna Verde, almost pure manduvira (Cynometra bauhiniaefolia) forests have been found, with specimens that showed good conformation, and good regeneration has been observed in those environments.

In the past few years, the biosphere reserve has worked on the development of productive micro-enterprises for the conservationist use of genetic resources. In this framework, the proposed activities include: semi-intensive horticulture, nurseries, floriculture, worm culture, breeding of large and small livestock, beekeeping, crafts in red ceramics and vegetable fibers, wild animal breeding: yacaré, capybara, otter, aquaculture, heliciculture (snail breeding), raniculture (breeding of edible frogs and for tanning their hides).

The Transition Zones include the City of Formosa, Herradura and Mission Laishi where most of the economic, social, cultural and sports activities as well as the residential ones are developed. The integration of the localities with the river environment generates a series of opportunities for the population of Formosa, both in relation to recreational use and environmental education.