The Laguna de Pozuelos Biosphere Reserve is part of the highlands of the Southern Central Andes, included within Dinerstien’s Arid Puna ecosystem, identified as a conservation priority. 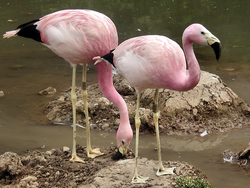 The biosphere reserve is located in the extreme north of the Province of Jujuy at 3,600 m above sea level and at 66º00' longitude West and 2º19' latitude South.

Pozuelos is a typical highland lagoon, with shallow brackish waters and scant vegetation. At its centre the depth is no more than 100 cm and it is located in the middle of a vast high plateau, surrounded by high mountain chains, acting as a limit to the basin that covers some 380,000 ha at between 3,600 and 4,700 m above sea level. The surface area of the waters is approximately 7,000 ha when the lagoon is full and its size increases and decreases seasonally due to rainfall which occurs exclusively in the summer. In addition to the seasonal changes in the volume of the body of water, other less predictable changes occur, such as droughts that can lead to the lagoon drying up completely.

Five main environments can be found within the BR: lagoon, paleo-lagoon, foothills, volcanic relief, eastern sierras, western sierras (main massif and river valleys). The Corporation for the Development of the Pozuelos Basin is promoting the comprehensive development of its inhabitants through plans and programmes aimed at making better use of the natural resources (llamas, sheep) without neglecting the conservation function.

The main activity is migratory sheep and llama grazing in accordance with the carrying capacity of each productive unit. There is a trend towards prioritizing llama raising because of its economic potential (meat and fibre) when considering comparative advantages vis-à-vis other exotic animals in the Basin.