Located in the Pacific Coastal Lowlands in Mexico, La Encrucijada Biosphere Reserve comprises two lagoon systems that host a big variety of ecosystems, such as mangroves, marshes, forests, coastal dunes and palm trees. It stretches over six municipalities in the state of Chiapas and is home to almost 30,000 people.

With a wide variety of species, the area is also a fundamental resting place for migratory birds. 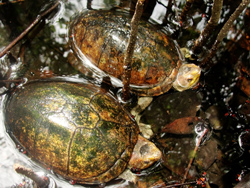 La Encrucijada is characterized by a large area covered by mangroves, in addition to patches of deciduous seasonal forest and lowland deciduous forest, as well as plant associations such as tulares Popal, zapotonales, floating and underwater vegetation, palm trees and coastal dunes vegetation.

Eleven major rivers flow into the Biosphere Reserve, forming both fresh and saline water lagoons, mangroves and tula swamps. Biological diversity and richness of the site is extraordinary and includes a number of wildlife species such as Jaguars (Panthera onca), river crocodiles and alligators, spider monkeys (Ateles fusciceps), turtles, among others.

Additionally, more than 300 bird species can be found in the area, 100 of which are migratory, as the ecosystem is a vital wintering and breeding ground for them. 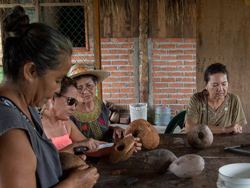 The roughly 30,000 inhabitants in the island make their living mostly out of river shrimp fishing, agriculture and stockbreeding. Several initiatives are currently being carried out to promote beekeeping and the production of organic vegetables and products, like cheese.