La Amistad Biosphere Reserve and National Park lies in the foothills and mountains of the Cordillera de Talamanca, between the mountain ranges of Panama and Costa Rica. 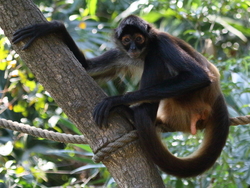 The Cordillera de Talamanca is the highest and wildest non-volcanic mountain range in Central America, formed by the orogenic activity, which created the land dividing the Pacific and Caribbean Oceans. Of the 20 life zones of Costa Rica, at least eight occur in the park, which includes lowland tropical wet rainforest to cloud and paramo forests. Most of the main crest lays within the montane rainforest life zone, characterized by mixed oak forest, the largest tracts of virgin forest in Costa Rica. On high peaks along the ridge over 3,000 meters above sea level, there are frequent stands of paramo, swamps and cold marshes. The paramo on Mt. Kamuk contains the richest and most variated vegetation in the entire Talamanca Range. Signs of tapirs (Tapirus terrestris), possibly of a species as yet unrecorded for Costa Rica are abundant near the Panamanian border. Puma (Felis concolor), ocelot (F. pardalis), jaguar (F. yagouaroundi), Central American squirrel monkey (Saimiri oerstedii) and Geoffroy's spider monkey (Ateles geoffroyi) are found within the biosphere reserve. 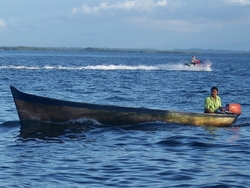 Man's impact on the Indian reservations is considerable, with about 24,950 (2002) people maintaining their traditional lifestyles with free-range grazing, hunting, fishing and use of medicinal plants. Local participation has been supported by NGOs, but it doesn’t exist permanent mechanisms of consultation. In 1987, a strategy for conservation was developed with technical and financial support, but integrative work has declined. However institutions work separately to promote the biosphere reserve concept. This site forms part of La Amistad International Park with Panama.