The ‘Islas del Golfo de California’ Biosphere Reserve with its over 240 islands, is located between the rocky and arid peninsula of Baja California, the vast desert of Sonora and the abundant mangroves of Sinaloa. The rich and well-preserved Archipelago is an important area for bird’s reproduction refuges and as a corridor of migrating species.

The area is rich in endemism and presents a great biologic and ecologic wealth of major economic importance for the country. It contains animal species such as ‘la iguana chukwalla’ (Sauromalus varius), ‘lobos marinos’ (Zalophus californianus) and ‘golondrinas marinas’ (Sterna elegans). Their origin is associated to tectonic and volcanic activities. Human population sourrounding the Gulf of California’s approximately 487,000 (1995) people, located mainly in ‘Guaymas’, ‘Mazatlan’, ‘La Paz’ and ‘San Felipe’. 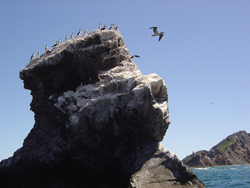 The Gulf of California and its present features are geologically recent: it is thought that they are approximately 4.5 million years old. The Gulf comprises a series of extended basins arising from the separation of the Baja California Peninsula from the mainland. Presently the average rate of separation is between 4 and 6 cm per year.

The islands are arid and abrupt, with irregular coastlines, steep cliffs of varying heights and some of their beaches are sandy, gravelly or pebbly but most of them are rocky. They are included in the Sonora Desert and approximately 665 species of plants have been identified. Cactus and other succulent plants prevail and are the most notorious island flora. Some of the islands with swampy areas or protected bays, such as along the east coast of Isla Tiburon, contain low mangroves. Some of the islands with sandy beaches have coastal dune vegetation, protecting the soil from erosion. The reptile group is the most relevant of the land vertebrates with a high level of endemic species.

There are 115 species of reptiles representing close on 10% of Mexico’s herpetological diversity. Coyotes and Mule Deer are among the larger mammals. Large colonies of California Sea Lions are among the marine mammals living in the coastal zone of the islands. There are approximately 154 species of land birds representing 30 families. Among these no endemic species are found because of their ability to move between the islands and the continent, thus not forming populations differing from those found in the peninsula or in the continent. Approximately 50% of the total number of species of land, beach and water birds are migratory. 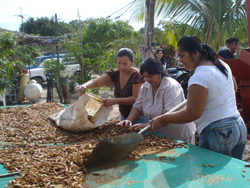 Roughly 1,6 million people live in the three zones of the Biosphere Reserve. In the buffer zones, they make their living mostly out ot fishing and tourism, especially related to sport fishing. In the wider transition zones, various activities are carried out, especially related to agriculture and fishing. In these areas, tourism infrastructure is more developed with hotels and restaurants.