The Galapagos Biosphere Reserve is situated in the Eastern Pacific Ocean 970 km from the mainland of Ecuador. The equator runs through the Wolf and Ecuador volcanoes on Isabella Island.  The Archipelago consists of 13 large islands with an area larger than 10 km², six medium-sized islands with an area of 1 km² to 10 km² and another 215 small-sized islands, in addition to rocky promontories of a few square metres.

The endemic and unique native flora and fauna make the Galapagos Islands one of the world’s truly exceptional places. In recognition of its importance, the islands were designated a Natural World Heritage site in 1976, a UNESCO Biosphere Reserve in 1984 and a Ramsar Site in 2001.

Situated on the Galapagos Submarine Platform, the Galapagos Islands consist of 13 large islands formed 4 million years ago by volcanic processes. The majority of the islands are the summits of volcanoes, some of which rise over 3,000 metres from the Pacific Ocean floor. The larger islands typically comprise one or more gently sloping shield volcanoes, culminating in craters or calderas, while the terrain generally consists of uplifted marine lava flows.
The geographical and historical isolation of Galapagos has given rise to a high degree of biodiversity and endemism. As of 2015, more than 2,900 existing marine species had been observed of which 18.2% are endemic.

Due to the influence of large systems of surface and submarine currents, Galapagos has a diverse fauna and flora with examples corresponding to the Indo-Pacific, Panama and Peru biogeographic provinces, and a high percentage of endemic species.
More than 45 endemic bird species, 42 reptile species, 15 mammal species and 79 fish species live in Galapagos and coexist harmoniously with the local population. The Galapagos Islands also host a rich variety of endemic flora with up to 500 species including vascular plants, bryophytes and algae.
The most representative species of the Galapagos National Park is the giant tortoise, which gives its name to the archipelago. Originally, there were 14 species of turtles, however hunting in the eighteenth century by pirates and whalers resulted in the extinction of three species. The constant eruptions of La Cumbre volcano also resulted in the extinction of species living on Fernandina Island.
All the reptiles in the Galapagos are endemic, with the exception of two marine tortoises. Examples include the giant tortoise (Geochelone elephantopus), terrestrial iguanas (Conolophus subcristatus and C. pallidus) and the marine iguana (Amblyrhynchus cristatus).
More than 250 non-native species have been introduced and are found predominantly around human settlements. Coastal vegetation, influenced by the presence of salt, is found along beaches, salt-water lagoons and low, broken, boulder-strewn shores. 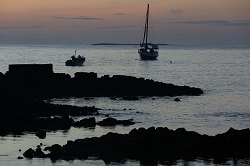 As of 2015, the Galapagos Islands were home to more than 25,200 human inhabitants. The five populated islands are generally the largest in the archipelago and contain natural resources that can sustain the life and development of the communities.
The central island of the archipelago is Santa Cruz, which is populated by about 15,700 people. Its proximity to the other populated islands likely favoured its productive development, trade and transport.

San Cristobal is home to about 7,200 inhabitants and is the capital of the insular province where the majority of governmental dependencies are concentrated. Isabela is the largest island of the archipelago and one of the most diverse. Its population of 2,340 inhabitants is relatively small but over recent years the local population has become involved in the development of ecotourism.

Floreana was the first inhabited island of the Galapagos, but retains only a small population not exceeding 120 inhabitants.
Tourism, cattle grazing and fishing are the key components of the islands’ economy.