The Cumbres de Monterrey National Park is located in Sierra Madre Oriental, in the province of the Sierra Madre Oriental and the sub-provinces of the Grand Sierra Plegada. The main types of ecosystems are coniferous forests, forests of oaks and scrub. It is considered a priority region and an important area for bird conservation because of its vicinity to El Taray reserve (a parrot reserve in the mountains in the east). It is important for the production of ecosystem services, providing approximately 50% of water consumed in Monterrey and its metropolitan area. 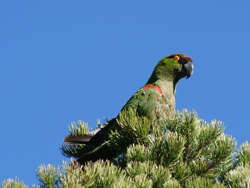 The area's vegetation includes bushes, crausicaule scrublands, pinewoods and others, which are home to a great biodiversity and to endangered species like the maroon-fronted parrot (Rynchopssita terrisi), the black bear (Ursus americanus) and the jaguar (Pantera onca). The Biosphere Reserve has boosted a Recovery Program for their conservation.

Near the Greater Monterrey area, the Biosphere Reserve of extreme importance to the region due to its environmental services. It regulates the weather and buffers natural phenomena, it caters the region's water needs, it captures carbon dioxide and protects the biodiversity and ecosystems, among others. However, the area is threatened by recent fires and also human activities.

32 towns are located in the biosphere reserves with the total population around 2000 people. The park has been zoned according to the priority of conservation of ecosystems and land use, including space for the development of the traditional activities of local residents.

Foresting in the Biosphere Reserve has been forbidden in 2000, and in 2005 a regulation came out with guidelines for sustainable agriculture practices. The former represented less economic opportunities for the locals, and the latter is not always implemented accordingly.

The influx of tourists is substantial, and has raised environmental concerns, specially in terms of waste and forest fires.