The Cuchillas del Toa Biosphere Reserve, is located at the Greater Antilles, in the northeastern region of Cuba, and covers the mountain region of Sagua-Garacoa in the Alexander de Humboldt National Park. It extends along 208,305 hectares, of which 6,013 belongs to the marine area. Cuchillas del Toa is considered as one of the principal centers of biodiversity and endemism in Cuba and the insular Caribbean with rainy mountain forests, cloud forests and xerophytic matorral to complex coastal vegetation with mangroves and coral reefs. 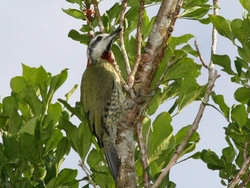 The karstic system of the great cave of Moa Head lands is one of the five natural monuments in the country and one of the great cave systems in eastern Cuba. With high biodiversity in flora and fauna, there are 928 endemic species reported, like the genus Podocarpus and Dracaena, ’botanic jewels‘ belonging to the most primitive species. Vertebrates as the royal carpenter (Campephilus principalis), the caguarero sparrow hawk (Chondrohierax wilsoni) and the almiqui (Solenodon cubanus) are also considered highly endangered species. Some of the world’s smallest mammal species are found in the reserve.

About 18,300 inhabitants (2002), in 498 communities, live in the buffer zone and transition area of this mountainous reserve. Engaged in forestry, traditional agriculture (coffee, coconut, and cacao) and ecotourism, they also raise cattle and participate in nickel, chromo, iron and cobalt mining explorations. These activities had increased negative impacts in the carrying capacity of the ecosystems, one of the main problems the reserve faces today. Another interesting aspect of this biosphere reserve is its history as battlefield for freedom. In the 18th and 19th centuries, black slave people ’cimarrones‘ struggles preceded the 20th century Cuban revolution.