Cozumel Island is situated off the south-east coast of Mexico and encompasses diverse marine and terrestrial ecosystems rich in amphibian and reptile species. The main terrestrial ecosystems are medium semi-deciduous forests and mangroves. The Isla Cozumel Biosphere Reserve is part of the second largest reef system in the world, the Mesoamerican Reef, which is home to 1,192 marine species. Nearly 80,000 people live in the biosphere reserve, the majority inhabiting the city of San Miguel. Tourism is the most developed sector on the island, which includes close to 40 Mayan archaeological sites. 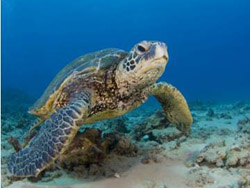 The main terrestrial ecosystems are medium semi-deciduous forest and mangroves. Medium semi-deciduous forest is rare in other parts of the state of Quintana Roo, and hosts a substantial proportion of species endemic to the island. Marine ecosystems constitute a significant portion of the proposed biosphere reserve, which forms part of the second largest reef system in the world, the Mesoamerican Reef.

With its diverse marine and terrestrial ecosystems, the area is rich in amphibians and reptile species, and is home to more than 1,000 marine species. These include the anhinga (Anhinga anhinga), the Atlantic Bluefin tuna (Thunnus thynnus), the Caribbean sharp-nose puffer (Canthigaster rostrate) and the hawksbill sea turtle (Eretmochelys imbricata). It is also home to three endemic species, which the IUCN considers to be critically endangered: the Cozumel raccoon (Procyon pygmaeus), the Cozumel trasher (Toxostoma guttatum) and the Cozumel harvest mouse (Reithrodontomys spectabilis).

The permanent population of Isla Cozumel amounts to 80,000 inhabitants. Human settlements are located mainly in the city of San Miguel, which accounts for most of the tourism and urban infrastructure. Tourism is the most important economic activity on the island with more than 3 million people visiting annually (2013). Due to this influx, the rate of unemployment is low among the population, which enjoys an income level above the average for Mexico.

Mayan heritage is a quintessential feature of Cozumel. There are more than 36 Mayan archaeological sites on the island, including material remains such as ceremonial and commercial centres and pilgrimage routes.