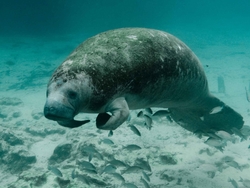 The Biosphere Reserve comprises Isla de Salamanca National Park, and the Flora and Fauna Sanctuary of the Ciénaga Grande de Santa Marta. The site lies at the interface between fresh and brackish water, shallow bays and deeper coastal waters thus creating a complex of habitats supporting a high diversity of flora and fauna. The alluvial prairies of recent origin inside the primitive delta of the Magdalena River include mud banks type formations, lagoons and channels with large mangrove associations, saw grass marshes and flooded and non-flooded forests. 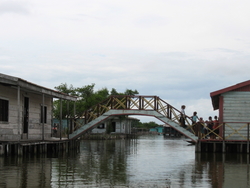 Some 200 people live in the Ciénaga Biosphere Reserve, engaged in fisheries, cattle grazing, banana and African palm plantations, and horticulture. These practices had affected some hydrologic ecosystems with agrochemicals, and the discharge of toxic substances. Around 1950 the road Ciénaga-Barranquilla was constructed, affecting the interface between the Magdalena River and the mangroves and marshes complexes, causing serious variations in the big wetland ecosystem. The hyper-salinization of lagoons and soils provoked the extinction of large mangrove forests and marshes.