Bosawas is a meeting point between the fauna of North and South America. It hosts an enormous amount of both vertebrate and invertebrate organisms. It is geographically located in northeastern Nicaragua and is bordered to the northwest by the Republic of Honduras, to the west by the departments of Jinotega and Nueva Segovia, to the south by the South Caribbean Autonomous Region, and to the east by the North Caribbean Autonomous Region. 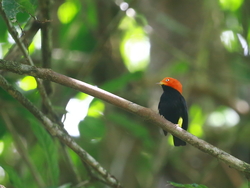 The tropical forest is the richest biome in the planet, and estimates say that 13% of known species worldwide can be found in Bosawas. There is a significant number of quetzals.

The arboreal composition of the Reserve's forests does not present significant changes, due to high humidity levels, which translates into a positive factor for biodiversity conservation.

Scientific studies carried out by MARENA (2011) indicate that "in the core areas of the reserve the forests that show an excellent state of conservation, surrounded by an area with intervened areas".

The indigenous peoples contribute to the protection of the natural resources of the Reserve and their economy is based on subsistence farming, domestic animal husbandry, hunting, fishing, harvesting and stocks of some of their products.  The family income is supplemented by the sale of beans, rice, cocoa, Ajipicantes and gold.

The settlement pattern of the communities is dispersed along the length of the rivers (but the twenty-nucleated communities, or the distance between cases is between 20 and 60m).When analysing economic activities, the first place is occupied by agriculture with crops such as corn (Zea maize), beans (Phaseolusvulgaris), rice (Orizasativa), cassava (Manihotesculenta), cocoa, coffee, and mushrooms.

Small-scale mining also is an important activity in the economy of the Biosphere Reserve.